“I hail from the great state of Maryland, where Democrats have shown when we all come together as one, we win more, bigger and better victories faster,” Jealous told cheering delegates.

That was after yet another prominent Maryland official, Baltimore Mayor Stephanie Rawlings-Blake, opened the convention, stepping in for the embattled chairwoman of the Democratic National Committee, Rep. Debbie Wasserman Schultz of Florida.

“I hereby call the 47th quadrennial Democratic National Convention to order,” Rawlings-Blake said during short welcoming remarks.
Hoyer represents Maryland’s 5th District and is the second-most powerful Democrat in the House. He contrasted the Republican and Democratic platforms.

Hoyer then encouraged voters to “bind together as a country and elect Hillary the president of the United States of America.” 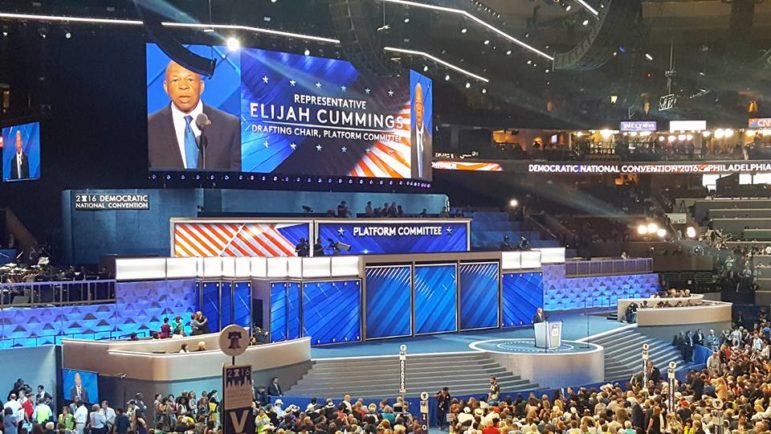 Cummings chaired the Democratic Platform Drafting Committee, and later on the stage, he drew on his father’s words: “The test of a man is not how much he helps himself, the true test is whether he helps those less fortunate.” The Democratic Party, he said, has passed this test.

“Our party does not just believe, but understands, that black lives matter,” he said to enthusiastic applause and chants of “Black Lives Matter” from the crowd. “But we also recognize that our communities and our law enforcement work best when they work together.”

“Ours is a party of unity and not division,” he said.

Cummings also gave a nod to Sanders’ platform by mentioning the wealthy 1 percent and the middle, working class. His statements could be heard over the crowd chanting “down with TPP” along with boos from Sanders supporters expressing their dissatisfaction with a Clinton nomination.

He urged voters to join the Democratic Party at the ballot box to make college more affordable, raise the minimum wage to $15 an hour and move energy away from coal and gas toward wind and solar.

“We will move America forward,” Jealous said, “to become the most perfect example of the unity and dignity of the human family that the world has ever seen.”

Podcast: March and Rally for Life