HOGAN PUSHES BACK ON EPA VIOLATION: The Hogan administration is challenging the Environmental Protection Agency over its finding that an old coal-burning power plant in Anne Arundel County likely is violating air pollution control rules and needs to take steps to fix the problem, writes Scott Dance in the Sun.

ADDICTION PROBLEM ADDRESSED: Jean Marbella and Meredith Cohn report about Baltimore City’s heroin-user stabilization program. As early as next year, Baltimore Health Commissioner Dr. Leana Wen hopes to open a “stabilization” center where addicts can be taken to sober up and get referrals to treatment and other services. The addicts — many of whom now end up in hospital emergency rooms or jail — also would receive food, clothing and a shower.

FIXING THE BAIL SYSTEM: In an op-ed for the Sun, Tricia Bishop writes that Antonio Muhammad sat in a Baltimore jail for weeks last year on $2,500 bail after being swept up in the riot-related arrests on charges of burglary. If it weren’t for a crowdfunding effort to help people like him afford bail and the efforts of his court-appointed attorney, the 20 year old with no criminal record might have sat there for 11 months — until prosecutors dropped his case this spring — simply because he was unable to buy his way out.

CRUNCH TIME FOR PG HOSPITAL: Political pundit Barry Rascovar, writing for MarylandReporter.com, says, “Here we go again: Another liberal-conservative showdown over a new hospital for Prince George’s County. Only this time, the confrontation isn’t between Republican Gov. Larry Hogan, Jr. and the Democratic legislature. Instead, the tug-of-war is between a conservative political scientist from a Republican think-tank and Democrats in the county who control its hospital system.”

PENSION FEE PAYOFF? Maryland’s public pension system pays more than $320 million in fees each year to professional fund managers who tout their ability to beat the market with smart investments. But some financial experts question whether those fees really pay off for the more than 382,000 active and former state employees who participate in the retirement plan, including teachers, state police and judges, Josh Hicks reports in the Post.

CUSTOMER SERVICE INITIATIVE: An AP report in the Sun says that Gov. Larry Hogan has launched an initiative to improve state government services in Maryland, which he announced on Thursday. It included focusing on creating a strong service culture in state agencies, improving customer service training for state employees and creating new service performance metrics to track improvement over time. 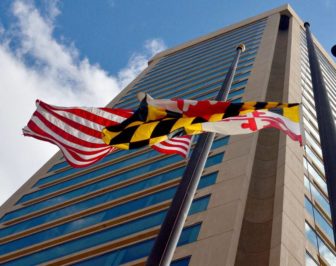 FLAGS AT HALF-STAFF: Gov. Larry Hogan on Sunday ordered flags to fly at half-staff in honor of the victims of the Orlando, Fla., mass shooting, the Sun is reporting. “We offer our most sincere condolences to the family and friends of the innocent victims of this act of terror, and our deepest gratitude to the first responders and law enforcement who responded to this tragedy with bravery and courage,” Hogan said.

HOWARD GOP MUM ON TRUMP: At the annual Howard County GOP’s Lincoln Day dinner Friday night, with speeches from the lieutenant governor, the county executive, the county chair, a veteran delegate and others, clearly one item was off the menu — Donald Trump, reports Len Lazarick for MarylandReporter.com.

SMITH LOANS PUGH $100,000: Democratic nominee for mayor, Catherine Pugh, has acknowledged that Jim Smith, the two-term Baltimore County executive and former Maryland Secretary of Transportation, arranged for a last-minute loan of about $100,000 to help the Pugh campaign get over the finish line in its April 26 primary victory over former Mayor Sheila Dixon. The loan came after the April 10 deadline for the filing of pre-primary finance reports by candidates and has not been previously disclosed by Pugh or her campaign, reports Mark Reutter for Baltimore Brew.

A HIKE TO THE POLLS: For some Carroll County residents affected by polling place relocations announced by the county Board of Elections, the change could more than quadruple the distance needed to travel to vote, reports Heather Norris in the Carroll County Times. Under changes unveiled Monday, voters currently assigned to polling places at the three county schools slated for closure at the end of the month will be sent to a new polling place for November’s general election.

TRANSPARENCY & CHARTER CHANGE: A proposed charter change headed to the ballot in November could limit access to public records, a retired Anne Arundel County attorney has cautioned County Council members, reports Amanda Yeager for the Annapolis Capital. In a memorandum, former County Attorney David Plymyer said charter changes recommended by County Executive Steve Schuh’s administration and approved by the council could have “substantive effects on the types of information available to the public.”

COUNCIL VOTES TO KEEP REBEL STATUE: The Talbot County Council has voted to keep a century-old statue depicting a color bearer holding a Confederate flag on the courthouse lawn, reports the AP in the Daily Record.

O’MALLEY ON CRIME: Former Gov. and Baltimore City Mayor Martin O’Malley steps into the fray over the ills of Baltimore City, writing in an op-ed for the Sun that “here are many things that led to the riot that followed the tragic custodial death of Mr. Freddie Gray a year ago this spring. Among the causes: lack of jobs, rising unemployment, declining wages, economic desperation, unresponsive government, unprofessional and poorly supervised policing, and videos of black citizens being killed in North Charleston, Ferguson, the Bronx. He then lists things that the city used to do that it no longer does that he believes could prevent problems.

SOMERSET LOOKS TO REGULATE CHICKEN INDUSTRY: The Board of Somerset County Commissioners is considering a plateful of zoning changes, starting with a hearing set for Tuesday, that would upend the county’s relationship with one of its biggest industries. New regulations under review in Somerset County would back up future chickenhouses at least 400 feet away from their neighbors. Those on the larger side would have to survive a public hearing; there are landscaping requirements for the first time and the structures’ ventilation fans would have to be kept 1,000 feet away from homes off the farm property.

ON BEZOS & THE POST: A new paper by Dan Kennedy, Joan Shorenstein Fellow  and associate professor in the School of Journalism at Northeastern University, provides insight into The Washington Post’s digital strategy and business model following its acquisition by Amazon founder and CEO Jeff Bezos. Many of the strategies Bezos is pursuing are applicable to any newspaper, writes Kennedy.