HOW A BILL GETS WATERED DOWN: Ovetta Wiggins of the Post reports on how a bill to fight underage drinking started out in the legislative process with a bang, but ended up being watered down.

EDUCATION FIGHT IN OFFING: Quietly and unanimously, with brief hearings and practically no news coverage, the Maryland General Assembly passed bills that will likely set up one of the most contentious legislative fights of its election year session in 2018, reports Len Lazarick for MarylandReporter.com. The companion bills, HB999/SB905, set up the Commission on Innovation and Excellence in Education, a 25-member panel charged with examining a long list of issues about public school funding. Its recommendations are due in October 2017.

FREDDIE GRAY LEGACY ‘DEVELOPING:’ A year ago Tuesday, Freddie Gray died in a hospital room at the University of Maryland Medical Center, his spine severed during a police van ride that came to symbolize Baltimore’s many struggles. The legacy of his death — national attention, hundreds of millions of dollars in new investment in the city, new policing standards — and the unrest that followed is still developing,  Gov. Larry Hogan said Tuesday. “The legacy of the Freddie Gray unrest? I think that remains to be determined,” Hogan said after touring a fruit and nut company in Baltimore County. Erin Cox writes the story for the Sun. 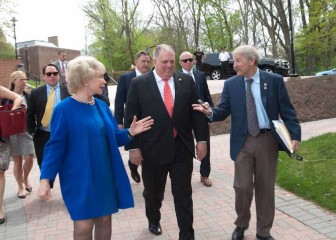 HOGAN AS PERSUADER: Bryan Renbaum, writing for the Baltimore Post-Examiner, writes that Gov. Larry Hogan made a surprise visit to Towson University Tuesday to teach students enrolled in Richard Vatz’s political persuasion class. He called Hogan’s rather unexpected 2014 victory over former Lt. Gov. Anthony Brown a testament to the governor’s own powers of political persuasion.  “I’m a small businessman, I had never held elected office before and I’m a Republican in a state that is overwhelmingly more than two-to-one Democratic,” Hogan said.

KASCISH IN ANNAPOLIS: Inside the Annapolis Crowne Plaza on Tuesday, Republican presidential candidate and Ohio Gov. John Kasich continued his push to contrast the bravado of his two opponents, playing the role as the centrist in the 2016 race, writes Phil Davis in the Annapolis Capital.  During a rally that largely focused on his record, as well as a plethora of anecdotes to highlight his connection to the working class, Kasich saw the support of prominent politicians like former Gov. Bob Ehrlich and Annapolis Mayor Mike Pantelides. A video from the event tops the story.

MSEA SEEKS TO BLOCK TRUMP SCHOOL RALLY: Ian Duncan of the Sun reports that the union that represents most teachers in Maryland called on the Worcester County school system to block Donald Trump’s campaign from using a high school gym to hold a rally Wednesday evening. “Donald Trump and his divisive, fear-mongering rhetoric have no place in the halls of Maryland’s public schools,” Maryland State Education Association President Betty Weller said in a statement. “Trump’s eagerness to bully minorities would be unacceptable if it came from any of our students.”

CLINTON AIRS AD WITH CUMMINGS: John Fritze of the Sun reports that Democratic presidential front runner Hillary Clinton will begin airing a new radio ad in Baltimore on Wednesday that features Rep. Elijah E. Cummings talking about the 2011 shooting of his nephew, and what the congressman describes as the need for gun control.

GOP CANDIDATES FOR SENATE: Candidates vying to be Maryland’s first Republican senator in nearly three decades are trying to piggyback off the popularity of Gov. Larry Hogan, reports Fenit Nirappil for the Post. House Minority Whip Kathy Szeliga boasts about working with Hogan to cut taxes in Annapolis; Chrysovalantis Kefalas, an executive with the National Association of Manufacturers, calls himself a “Hogan Republican;” tire company owner Joseph Hooe fondly recalls campaigning for Hogan’s 2014 election; and former Pentagon official Richard Douglas mentions that Hogan appointed him to the state ethics commission.

EDWARDS, THE OUTSIDER: Years before Donna Edwards took her seat in the House of Representatives, she and a small group of advocates trudged through the halls of Capitol Hill in search of any lawmaker who would listen to a message that wasn’t easy to hear. Edwards, 57,has long pushed for change as an outsider. That was the case when she advocated for the domestic violence law, which provided funding to help victims, and it is now a central message of her campaign for Maryland’s open Senate seat, writes John Fritze in this profile for the Sun.

VAN HOLLEN, CARING FOR CONSTITUENTS: A few years ago, Rep. Chris Van Hollen went to the White House more than a dozen times to discuss spending and taxes during touchy federal budget negotiations on Capitol Hill. But he rarely left without pulling the president aside to ask about something else: What was the Obama administration doing to bring home Marylander Alan Gross, the government subcontractor held in Cuba since 2009? “He cares about his constituents,” said Gross, who was released in 2014, John Fritze of the Sun writes in this profile.

BROWN LOANS CAMPAIGN: In the final campaign finance reports before the April 26 primary, two Democratic candidates in Maryland’s 4th Congressional district race have eclipsed the million-dollar fundraising mark but one dipped into personal funds to do it. That person is former Lt. Gov. Anthony Brown, writes Arelis Hernandez writes in the Post.