Maryland will have ‘outsized voice’ in GOP nomination, says Cruz 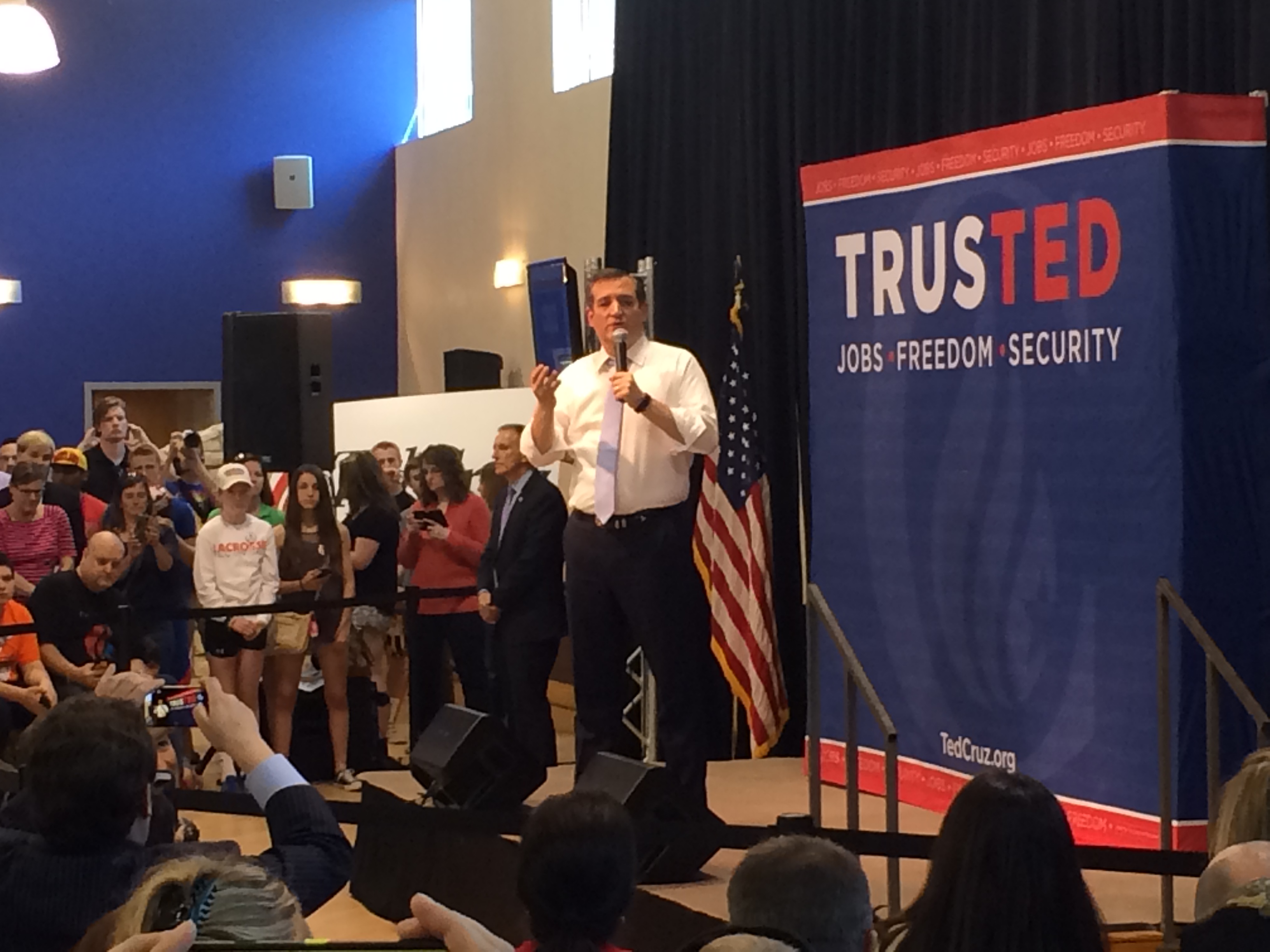 “Come out and vote for me 10 times,” Texas Sen. Ted Cruz urged his boisterous supporters at a Towson American Legion Hall Monday afternoon. “But look, we’re not Democrats, so I’m not suggesting voter fraud. If everyone here goes out and gets nine other people to vote for me, you will have voted 10 times.”

The visit by Cruz, and another by Ohio Gov. John Kasich Tuesday, and Donald Trump near Ocean City on Wednesday are new experiences for many voters in Maryland where presidential candidates are typically scarce and their votes irrelevant.

The state usually doesn’t matter by the time its primary rolls around, Sen. Michael Hough, chair of the Cruz campaign here, told the crowd. “This year every vote, every delegate will count … You can vote today; we cannot afford to lose it.”

“There is one conservative candidate that can win the primary, and win the general election,” said Hough, and that’s Cruz, “a constitutional conservative.”

The Cruz appearance was very different from Kasich’s town hall in Howard County last week. Hastily organized with 24 hours notice, many more in Monday’s crowd of over 600 were committed Cruz supporters, anxious to see the candidate they knew a lot about.

The event was more theatrical, with former presidential candidate Carly Fiorina introducing Cruz with a short talk and a video, and then the candidate himself, mobbed by supporters along a rope line as he came and went.

In a rambling style, Kasich spoke and took questions for over 75 minutes. Cruz was on stage about 20 minutes, giving a dramatic and well practiced speech, interrupted repeatedly by applause, shouts, hooting and hollering.

Cruz did not hesitate to attack Trump by name, prompting boos and catcalls from the audience whenever he did.

“Hillary Clinton and Donald Trump are too sides of the same coin,” said Cruz. “He will preserve the system. He will take advantage of the system.”

Cruz casts himself as an opponent of “the system,” and he has been an outsider in the halls of the U.S. Senate.

Fiorina put a positive spin on it. “I know Ted is a fearless fighter. He has the scars and the enemies to prove it.”

But as Trump has risen and the field of opponents has dwindled, Cruz proudly lists five other presidential candidates who have now endorsed him: Fiorina, Rick Perry, Lindsay Graham, Jeb Bush and Scott Walker.

“It’s easy to talk about making America great again. You can even print that on a baseball cap.”

Here are some of Cruz’s key points, which may be familiar after seeing him on a dozen debates and forums.

Cruz described a conversation with Trump where the New York businessman told him he had “to learn to compromise” on issues like religious liberty.

Trump hands the election to Clinton

Ted Cruz poses for pictures after his speech.

“Nominating Trump hands the election to Hillary Clinton,” Cruz said, and could possibly lose the Senate, maybe the House of Representatives, and the Supreme Court “for a generation to come.”

“Maryland is a battle ground,” said Cruz. “Maryland is going to have an outsized voice” in choosing the party’s nominee.

Lisa Hubbard of Parkville wasn’t sure she was supporting Cruz before he arrived, but she was sure of her disdain for Clinton, as shown by the button she wore — “Hillary for Prison.”

But after the event, Hubbard was a Cruz convert, and even though she is a Democrat who can’t vote for Cruz in the primary, she said the rest of her family are Republicans, and she was going to round up those nine other voters.

Craig, Ulman, George: 17 months to go in the lengthening campaign for governor