THE RUNDOWNS: Len Lazarick and Alessia Grunberger of MarylandReporter.com report that of 2,817 bills introduced in the General Assembly this session, 834 passed both houses and have been sent to the governor for his approval. Many were local legislation, relating to only one or two counties, including almost 100 bills tweaking the crazy quilt of liquor laws throughout the state. Here’s what happened to some of the bills covered in-depth by MarylandReporter.com, from end of life options and birth injuries to poultry litter. 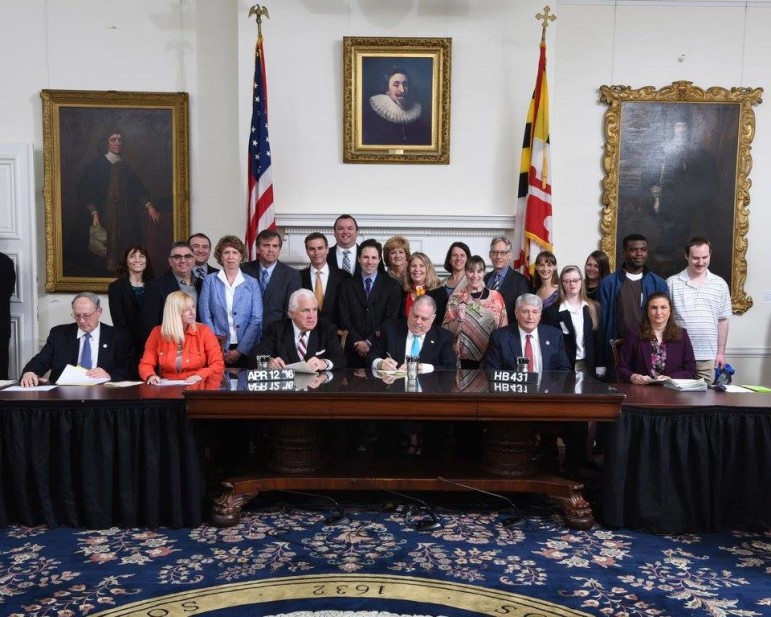 Gov. Hogan signs bill allowing people with disabilities to save more money than currently allowed and keep their government benefits.

UPBEAT OVER SESSION: Gov. Larry Hogan and the leaders of the General Assembly were upbeat about the just-ended legislative session as they gathered to sign 106 bills Tuesday, writes Michael Dresser of the Sun. The governor joined Senate President Mike Miller and House Speaker Michael Busch at the traditional post-session bill signing. The annual 90-day session ended at midnight Monday.

MIKES SPLIT ON SPECIAL SESSION: Despite a suggestion from Senate President Mike Miller to bring lawmakers back to Annapolis to hammer out deals on tax cuts and paid sick leave, House Speaker Michael Busch said Tuesday that he does not “see a special session on the horizon,” Ovetta Wiggins of the Post reports.

NO PUNITIVE DAMAGES: The legislature passed a number of measures to strengthen laws against drunken driving. But, writes Steve Lash for the Daily Record, Maryland lawmakers failed to pass a bill that would have enabled very drunken drivers to be held liable for punitive damages if their driving caused death or injury. The bill will be reintroduced next year, said Sen. Bobby Zirkin, chair of the Judicial Proceedings Committee. However, the chances of getting the punitive damages bill through the House committee next year appear slim.

ENVIRONMENTAL VICTORIES: Environmental advocates had some victories this session, from passage of  a neonicotinoids bill that would make Maryland the first state in the country to take the pesticides off retail store shelves to approval of a more aggressive 40% greenhouse gas reduction goal for 2030. The legislature also passed a renewable energy bill to increase the state’s use of wind and solar sources by 25% by 2020. But one disappointment was the failure of a bill that would require companies to pick up excess manure and take the burden off individual farmers and taxpayers, Anamika Roy reports for the Daily Record.

LOTS OF SUPPORT, LITTLE CHANCE: Del. Angela Angel got the idea for what would become House Bill 1396 when she was running for office in 2014, juggling a campaign, five children and an estranged husband who, she said, would call, text and email her up to 30 times a day. She went to court seeking a restraining order and learned that without allegations of physical abuse, the judge wouldn’t grant one. Arelis Hernandez writes about what it is like to introduce a bill that has a lot of supporters, but little chance of making it through the process to become law.

ARREST RECORD EXPUNGEMENT FAILS: Eleventh-hour logistics killed a bill with bipartisan support in the General Assembly that would have allowed people to expunge online evidence of crimes that didn’t result in convictions, Heather Cobun of the Daily Record reports.

MILLER URGES COURT CHALLENGE TO FANTASY SPORTS: Senate President Mike Miller called on the state attorney general Tuesday to file a legal challenge to daily fantasy sports operations, which would allow the courts to settle the murky issue of whether the games are permissible under Maryland law, Jeff Barker of the Sun reports. “The attorney general’s going to have to file suit and take it to court,” Miller said following a signing ceremony for unrelated legislation.

HEALTH CARE WINS, LOSES: As the General Assembly entered its final hours Monday, a bill supporters said would provide critical funding to organizations that offer addiction services and mental-health treatment inched its way toward final approval by passing two key votes in the House of Delegates. But, writes Daniel Leaderman in the Daily Record, the measure was ultimately a casualty of the ticking clock, as the differences between the versions passed by the House and Senate weren’t resolved before time ran out.

BLUE CRAB COMEBACK: Christina Jedra of the Annapolis Capital reports that blue crab population in the Chesapeake Bay has clawed its way back from a 2014 lull. The bay-wide crab population is about 553 million, a 35% increase over last year’s total of 411 million, according to the Winter Dredge Survey released Tuesday by the Maryland Department of Natural Resources. DNR officials and stakeholders will discuss the possibility of loosening regulations like season length and bushel limits. Decisions will be announced by the end of June, but until then, restrictions remain the same as last year,

PG BANS FRACKING: Lawmakers in Prince George’s County voted unanimously on Tuesday to ban hydraulic fracking, becoming the first local jurisdiction in Maryland to prohibit the extraction of natural gas within its borders since the state’s moratorium on the practice went into effect, Arelis Hernandez reports for the Post.

CLINTON, TRUMP LEAD IN NEW POLL: With two weeks to go before Maryland’s primary, Hillary Clinton and Donald Trump continue to lead their respective presidential races in the state, according to a new poll released Tuesday. Clinton topped Sen. Bernie Sanders of Vermont by 22 points among likely Democratic voters in Maryland, according to the NBC4/Marist Poll. Among Republican voters, Trump had a 12-point lead over Texas Sen. Ted Cruz, the Sun’s John Fritze is reporting.

SLIGHT POLL LEAD FOR VAN HOLLEN: A new poll in the competitive contest for Maryland’s open Senate seat released on Tuesday shows Rep. Chris Van Hollen with a single-digit lead in the race over his opponent, Rep. Donna F. Edwards. Van Hollen, a Montgomery County Democrat, captured support of 44% of likely Democratic voters in the NBC4/Marist Poll compared with 38% for Edwards, of Prince George’s County. Nearly two in 10 voters were undecided, writes John Fritze in the Sun.

TRONE SPENDS $9M: Wine retailer David Trone will report to the Federal Election Commission later this week that he has spent $9.1 million of his own money so far in pursuit of the Democratic nomination for Maryland’s 8th Congressional District, making him all but certain to become the biggest self-funding House candidate ever, Bill Turque of the Post is reporting.

MAYORAL DEBATE: Tuesday night’s debate for those running for mayor of Baltimore City was the last lap; and no one took a home run swing, so the evening was peppered with good arguments by a generally well-prepared group of candidates but lacked excitement, writes Richard Vatz in MarylandReporter.com. There was no standout performance, but Catherine Pugh and Carl Stokes were the most aggressive and impressive substantively by a small margin. 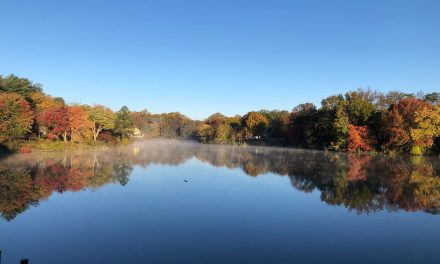