RANGE OF REACTIONS OVER RX POT: Nearly 2 1/2 years after legalizing the use of marijuana for medicinal purposes, Maryland is preparing to issue business licenses to dispensaries and cultivation centers — prompting a range of reactions from local elected officials. At one extreme, Anne Arundel County Executive Steve Schuh (R) is proposing a ban on cannabis production and shops in the county. Elsewhere, Republicans hungry for jobs in their rural communities are embracing potential marijuana businesses, Fenit Nirappil reports for the Post.

PARCC SCORES RELEASE DATES: Maryland’s State Board of Education on Tuesday confirmed plans to release PARCC assessment scores in late October and early December, CNS’s Marissa Horn writes in MarylandReporter.com. The PARCC, which stands for the Partnership for Assessment of Readiness for College and Careers, was administered for the first time in 11 states and the District of Columbia in the spring as a part of the Common Core Standards Initiative, a widespread but controversial effort to measure education in the United States.

TRACKING POLICE INTERACTIONS: Advocates and lawmakers Tuesday called for more robust data collection and reporting when it comes to arrests, traffic stops and other police interactions with the community, Bryan Sears reports for the Daily Record. “The biggest hole in the data is that it is not disaggregated,” said Toni Holness, a public policy associate with ACLU Maryland. “It’s not possible to identify patterns of discrimination in local jurisdictions using aggregate data.”

STATE’S LONGEST EMPLOYEE RETIRES: The top of Timothy Hyman’s desk is barely visible, with piles of head shots of current and former state employees scattered across it. Enlarged photos of highways, bridges and intersections throughout the state of Maryland are taped to his office walls. The pictures are just a few of the thousands taken by Hyman, the staff photographer for the Maryland State Highway Administration for more than a half-century. Hyman, who will turn 78 next week, retires this month as the state’s longest-serving employee, Ovetta Wiggins writes in the Washington Post.

DLS TO BE REORGANIZED: A Department of Legislative Services, which assists the Maryland General Assembly, will be reorganized, after its longtime executive director retires next year and Warren Deschenaux takes over.  There will be four departments, all answering to Deschenaux:  policy analysis, administration, audits and information systems, the AP’s Brian Witte reports in the Daily Record.

FORMER DEL. DEAN DIES AT 80: Walter R. Dean Jr., a retired teacher who was a leader in the 1950s civil rights movement and served in the Maryland House of Delegates, died of congestive heart failure Friday at Seasons Hospice at Northwest Hospital Center. The Lochearn resident was 80, Jacques Kelly reports for the Sun.

NIH PATIENT, RESEARCH DISRUPTIONS POSSIBLE: Patients with critical illnesses will be turned away and research will be disrupted if the government shuts down again on Oct. 1, the director of the National Institutes of Health and the top Democrat on the House Budget Committee warned Tuesday. With just four legislative days remaining until the new fiscal year begins Oct. 1, Rep. Chris Van Hollen said that during the 16-day shutdown in 2013, new patients were not allowed into the clinical facilities of the Bethesda medical campus, Lenny Bernstein writes in the Post.

BRYANT BOWS OUT OF CONGRESS RACE: Saying that his church is his first priority, the Rev. Jamal H. Bryant said Tuesday that he is bowing out of a campaign for Congress he launched just eight days ago, John Fritze writes for the Sun. Bryant, the 44-year-old pastor of the Empowerment Temple in Northwest Baltimore, surprised many by announcing Sept. 14 that he would seek the Democratic nomination for the 7th Congressional District. That seat is currently held by Rep. Elijah E. Cummings.

BRICKLAYERS BACK EDWARDS: Maryland Senate candidate Donna Edwards picked up the endorsement of an international bricklayers union on Tuesday, the latest labor group to weigh in on the high-profile race, John Fritze reports for the Sun. The International Union of Bricklayers and Allied Craftworkers, which has 76,000 members in the U.S. and Canada, said in a statement Tuesday that Edwards “has consistently put working families first.” The union has about 1,050 members in Maryland.

ETHAN SAYLOR LAWSUIT DELAYED: The lawsuit over the death of Ethan Saylor, a man with Down syndrome who died in 2013 after being forcibly removed by sheriff’s deputies from a Frederick movie theater, has again been delayed. Lawyers for Saylor’s family, who are suing deputies for wrongful death, are seeking to learn more about doctors hired by the deputies as potential expert witnesses. The lawyers want to take depositions from each of the five medical experts, who were recently identified by attorneys for the three deputies named in the family’s complaint, Danielle Gaines reports for the Frederick News Post.

CORRECTION: In yesterday’s Roundup, reporter Jen Fifield’s newspaper should have been identified as with the Frederick News Post. 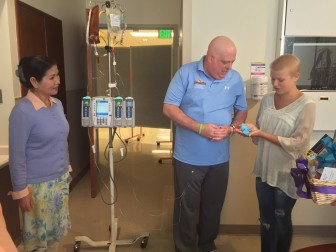 “Today is my 24th day of chemo and I had my 4th spinal tap this morning. It feels good to know we are killing cancer cells every day!

“At the hospital this afternoon I met my new friend Madison, who is in remission and now cancer-free, and talked about the beautiful paper cranes she had hanging on an IV stand. Cranes are a symbol of healing, and I learned that the hospital [University of Maryland in Baltimore] has a partnership with Kanazawa University Hospital in Japan, a major cancer treatment facility. Recently, pediatric patients in Kanazawa made 2,000 origami paper cranes and sent them to the pediatric unit here, and now the kids here are making 2,000 healing bands to send back to Japan!

Madison presented me with my own paper cranes that I now have sitting beside me as a reminder of all those fighting cancer. Please keep all the cancer patients in your thoughts and prayers!”