Gov. Larry Hogan talks to reporters after the session, as members of his staff stand behind him on the stairway. 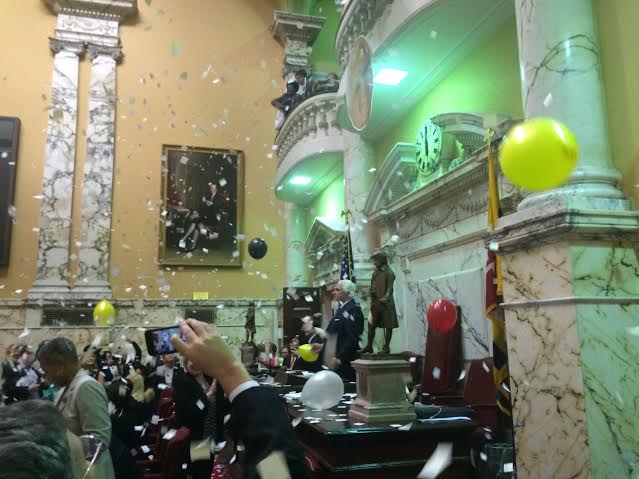 Paper and balloons come down on Senate President Mike Miller as the session closed at midnight.

What would a 90-day legislative session with its turn-into-a-pumpkin midnight deadline be without a little high drama at the finale?

Competing Senate and House tax-cut packages turned into no tax cuts at all, except for a select few, including a multibillion-dollar defense contractor.

Parts of a firearms safety package backed by the Democratic leadership wound up being scuttled for overreach after they were combined in a conference committee on the final day.

Left with a pumpkin, Senate President Mike Miller suggested a one-day pie-making special session to get the high-end tax cuts the House of Delegates was reluctant to give, along with the earned sick leave bill the Senate Finance Committee considered not ready for prime time.

“It was just one of those things we could not agree on,” Miller said of the tax cuts for many, including high earners. “We tried hard to reach an agreement,” but the House wanted a change in how corporate tax is calculated and no tax reductions for those making over $100,000.

‘Can’t get their act together’

Gov. Larry Hogan was ready to support any tax cut the leaders could agree on, but got none of several small ones he proposed.

“Quite frankly we don’t understand what happened,” Hogan told reporters. “It sounds like they couldn’t get along with one another…. These guys couldn’t seem to get their act together.”

But Hogan seemed just an observer of the drama playing out below him at the State House, hopeful but not optimistic.

Despite the theatrics on some issues, hundreds of bills did pass on the final day, and Hogan will sign 106 mostly minor bills Tuesday morning.

A major 163-page Justice Reinvestment Act, HB1312, totally revamping how those convicted of crimes are sentenced and rehabilitated, finally got worked out in a conference committee Saturday. There was heavy involvement of legislators from both parties as well as Hogan aides.

After differences were hammered out the justice overhaul gained unanimous, bipartisan approval in the Senate, but across the hall in the House, 19 Republicans rejected it for various reasons.

On the environment, House Environment Chair Kumar Barve called the Sustainable Oyster Population and Fishery Act, SB937, one of the most significant bills ever passed for the Chesapeake Bay, agreed to by all the stakeholders including watermen. It finally passed Monday night with little opposition after much negotiation.

Then there were bills with broad support that had been wrangled over for weeks to resolve differences between the House and Senate, but were not finally enacted till the final hour of the session.

Those included Noah’s Law, SB302, named after a Montgomery County police officer killed by a drunk driver. It will require ignition interlock devices for most people found driving under the influence of alcohol.

Weeks ago, both chambers had also unanimously passed legislation that stops the use of individually administered kindergarten tests. The tests had upset teachers because of the time taken to give the tests individually to every child and then to provide the data to the state education department.

Those bills, HB657 and SB794, sponsored by Del. Haven Shoemaker, R-Carroll, and Senate Minority Leader J.B. Jennings, R-Baltimore-Harford, eventually went to conference committee to resolve small differences. They now permit those tests to be used on a sample of kindergarten students before they start school.

There were other bills that passed overwhelmingly in one legislative house only to die quietly in a committee of the other chamber. That included HB141, by Del. Eric Luedtke, D-Montgomery, that restricted mandated standardized testing to 2% of instructional time — about 20 hours per school year.

Much of the legislative action was bipartisan, with hundreds of changes in law passed with overwhelming majorities.

Then there was the unusual bipartisan victory of a $37.5 million tax break over five years for defense contractor Northrup Grumman. It was a Hogan administration bill, SB1112, that many Republicans didn’t like because it was corporate welfare, but voted for anyway.

It ultimately passed in the House 74-59, with about 30 Democrats joining most Republicans supporting the bill. It included a debate between House Minority Leader Nic Kipke, who didn’t like it but supported it, and Del. Herb McMillan, a fellow Anne Arundel Republican, who disputed the merits of the bill. 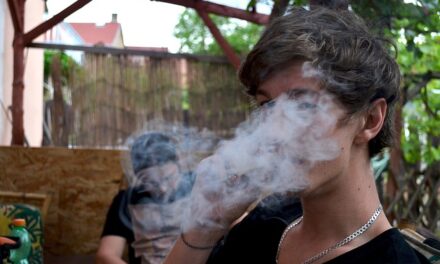