UNRESOLVED: Several critical issues, including income tax cuts and an overhaul of Maryland’s criminal justice system, remain unresolved as the General Assembly enters the marathon finale today to its annual 90-day session, reports Michael Dresser and Erin Cox of the Sun. Also hanging in the balance are broad changes in the way police departments hold officers responsible for misconduct and stiffer sanctions for drunk drivers.

JUSTICE REFORM: Maryland lawmakers are poised to vote on sweeping reforms to the state’s criminal justice system in the final hours of their annual legislative session today, reports Pamela Wood for the Sun. The Justice Reinvestment Act will push more low-level drug offenders into treatment, create an easier path for some inmates to be released sooner, limit the amount of time parole violators spend behind bars, remove some mandatory minimum sentences and allow people to expunge more convictions from their criminal record.

INTERLOCK LAW: Maryland’s long-stalled ignition interlock bill, which was on the verge of final passage in the General Assembly, has hit a roadblock with the legislature set to adjourn tonight at midnight. The two chambers need to reconcile differences in the bills before the session ends, Ovetta Wiggins and Josh Hicks of the Post report.

TAX RELIEF: House Ways and Means Committee approved legislation Friday that would expand tax credits for the working poor and reduce taxes for individuals and many businesses, setting up a likely floor vote on the package, reports Josh Hicks for the Post. The bill was an amended version of a measure the Senate passed overwhelmingly last month. It would reduce state revenue by an estimated $201 million, while the Senate plan would mean $227 million less for state coffers, according to lawmakers on the panel.

1st RESPONDERS TAX BREAK: The General Assembly has given final approval to legislation granting a property tax break to first responders who buy a home in Baltimore City, reports Michael Dresser for the Sun. The measure, which now goes to Gov. Larry Hogan for his consideration, allows the city to give Baltimore police officers, sheriff’s deputies and firefighters a tax credit of up to $2,500.

FANTASY SPORTS PLAY: Fans of commercial fantasy sports play may find the outcome of the 2016 Maryland General Assembly session less than satisfying, reports Bryan Sears for the Daily Record. Two Senate bills meant to address the legality of popular sites such as FanDuel and DraftKings appears doomed in the House of Delegates heading into today, the final day of the session, at the same time that those companies have paid for radio ads urging players to contact legislators to oppose the laws.

HOGAN’S FIRST TWO YEARS: In a long interview with Len Lazarick of MarylandReporter.com, Gov. Larry Hogan touches on topics from the transportation scoring bill to his vetoes and the legislature’s overrides to mandates and tearing down vacant buildings in Baltimore City’s blighted neighborhoods.

A RAPE VICTIM’S NIGHTMARE: For the second year in a row, he put it all out there: the shame, the fear, the self-loathing, the pain, the dark details of his horrific, repeated rape. An Army veteran and attorney, Del. C.T. Wilson stood before his colleagues in Annapolis, confessed that he “really, really” didn’t want to be there and told them why he doesn’t sleep much at night. Why he hoped his children would never be boys. Why he knows he is “a monster on the inside.” Columnist Petula Dvorak of the Post writes about one man’s attempts to change the statute of limitations on civil action against sexual abusers.

SERIAL RAPISTS AT TRIAL: Trey Perkins, in a op-ed for the Sun, urges the General Assembly to change the law and allow prosecutors to try serial rapist cases together. Maryland law currently prevents prosecutors from allowing the jury to hear the entire extent of a serial rapist’s crimes. No matter how many times a serial rapist assaults a new victim, the jury will only hear one victim’s case at a time. Perkins is assistant state’s attorney working in the Special Victims Unit of the Baltimore City state’s attorney’s office

COMPROMISE ON REDISTRICTING: A leading Democratic senator said Friday that Gov. Larry Hogan (R) may be open to a compromise proposal for redrawing the boundaries of congressional districts, after his own plan has stalled in the legislature for three months, write Ovetta Wiggins and Josh Hicks in the Post.

WASHINGTON BILLS: Tamela Baker of the Hagerstown Herald Mail writes about the bills affecting Washington County that have made it in the General Assembly. She outlines where they stand now.  A number have already been approved for the governor’s signature, some are pending and a few others have been left in limbo.

HOGAN HOLDS POWER: Richard Cross, in a column for Center Maryland, writes a humorous piece addressing Gov. Larry Hogan’s success in Annapolis and popularity throughout the state, and the zombie culture that surrounds him.

HOGAN CEDES POWER: Gov. Larry Hogan has made it clear he’d just as soon do away with those pesky lawmakers and rule by executive fiat, opines Barry Rascovar in MarylandReporter.com. His propaganda pitch is simple: I’m immensely popular right now and that should be enough to sweep away all opposition to my policy proposals.

EQUAL PAY LAW: The AP is reporting in the Sun that the General Assembly has passed an expansion of the state’s equal pay law. The House of Delegates gave the bill final approval on a 100-36 vote Saturday. The bill strengthens state law that prohibits pay discrimination based on gender. The measure also prohibits discrimination based on gender identity and prohibits businesses from retaliating against employees for discussing or disclosing salaries.

LYNNE PORTER RETIRES AT MIDNIGHT: Lynne B. Porter is treasured in the august State House chamber for her unflappable calm. For nearly three decades, Porter has worked as the Senate reading clerk, calling out the name of each bill as it is considered, tallying votes and projecting the legislation under consideration on two electronic screens. She retires at midnight tonight, Ovetta Wiggins of the Post reports.

GUN BOARD NOMINEE OUT: A Hogan administration appointee who questioned the constitutionality of the concealed carry law he was supposed to enforce officially lost his post on the Handgun Permit Review Board Saturday, Erin Cox of the Sun reports.

HOGAN RECALLS TIM McGRAW GIFT: As we got up to leave the interview with Gov. Larry Hogan Friday afternoon, we spied the guitar hanging on the wall of his Statehouse office in a big shadow-box frame, writes Len Lazarick for MarylandReporter.com. The governor was happy to explain. Turns out the guitar is a signed gift to Hogan from country singer Tim McGraw.

CONSTITUENT SERVICE MATTERS: In the congressional races affecting Anne Arundel County, one thing is becoming clear among Democratic primary candidates: Constituent service matters, Phil Davis of the Annapolis Capital reports. During several meetings with the Annapolis Capital’s editorial board, candidates in races for the 4th Congressional District seat and Maryland’s open U.S. Senate seat say constituent service will be a key to how they meet the needs of Anne Arundel.

RASKIN AD TICKS BARVE: Two Democratic candidates for Maryland’s 8th Congressional District are in a dust up over an ad that claims only one them has crafted laws to reduce the state’s carbon footprint, reports John Fritze for the Sun. State Sen. Jamie Raskin began airing a series of ads late last month in the competitive race, including one that trumpeted his endorsement from the Sierra Club.

ON BARVE: Kumar Barve, 57, a seven-term delegate who represents Rockville and Gaithersburg, looks for opportunities to bring a lighter touch to his politics. In a U.S. House campaign filled with solemn and earnest discussions of jobs, immigration, redistricting and climate change, he stands out as serious about the work — but less so about himself, Bill Turque of the Post reports.

VAN HOLLEN ATTACKS EDWARDS: Rep. Chris Van Hollen’s campaign for Senate began airing its first attack ad against rival Rep. Donna F. Edwards on Friday, criticizing his opponent by suggesting she has been an ineffective member of Congress, John Fritze writes in the Sun. The story is topped by the ad.

EDWARDS TOUTS CRIMINAL JUSTICE: In a tight race for the seat of retiring U.S. Sen. Barbara Mikulski, U.S. Rep. Donna Edwards thinks she has found a way to draw a distinction between herself and fellow progressive U.S. Rep. Chris Van Hollen: Their stances on criminal justice, writes Phil Davis for the Annapolis Capital.

CAPITAL BACKS VAN HOLLEN: The editorial board for the Annapolis Capital opines that U.S. Reps. Chris Van Hollen of Montgomery County and Donna Edwards of Prince George’s County both graciously accepted invitations to meet with it. And of the two, Van Hollen is clearly the one best qualified to take up where Mikulski will leave off.

ON GUTIERREZ: Del. Ana Sol Gutiérrez says she’s made history with each step of her political career: First Hispanic elected to a Maryland school board when she won a seat on the Montgomery County Board of Education in 1990. First Latina elected to the Maryland General Assembly, in 2002, Fenit Nirappil of the Post reports.

MD PRIMARY VOTE MAY MATTER: Marylanders who vote in the state’s presidential primaries this month will find themselves in an unfamiliar position: For the first time in years, their choices might actually matter, reports John Fritze for the Sun. Maryland’s late primary — it falls nearly three months after the first-in-the-nation Iowa caucuses — generally relegates the Old Line State to an afterthought in the presidential nomination process. But in this unpredictable election year, Maryland could exert a level of influence not felt in decades. 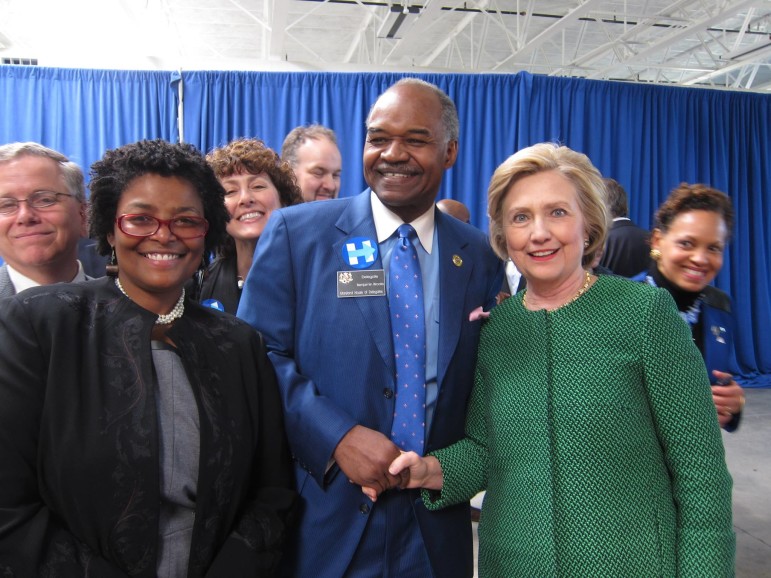 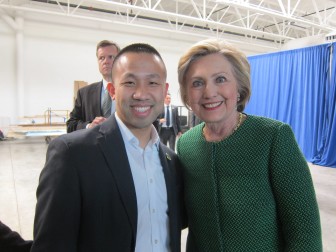 ENDORSING CLINTON: Hillary Clinton’s presidential campaign announced more than 200 endorsements from Maryland women on Saturday, a day before her first visit to the state.  The extensive list includes Bel Leong-Hong, a former deputy assistant secretary of defense who is one of Maryland’s super delegates, state Sen. Joanne C. Benson of Prince George’s County and former Baltimore Mayor Sheila Dixon, who is running this year to reclaim City Hall, John Fritze of the Sun writes.