SOME VETOES, SOME SIGNATURES, SOME NOT: Gov. Larry Hogan said Tuesday he will let a series of bills he dislikes become law without his signature, avoiding a showdown with the General Assembly over vetoes, Pamela Wood of the Sun writes. Among them are a package that will send hundreds of millions of dollars to Baltimore City to expedite demolition of vacant housing, redevelop blighted neighborhoods and pay for park renovations and after-school programs.

PAID SICK LEAVE PASSES HOUSE: The House of Delegates easily passed a bill requiring paid sick leave for all but the smallest businesses in Maryland, rejecting Republican warnings that it was job killer, reports Len Lazarick for MarylandReporter.com. In the 84-54 vote, five Democrats joined all 49 Republicans present opposing the bill, which faces an uncertain fate in the Senate Finance Committee.

TAX RELIEF, REDISTRICTING REFORM REMAIN OPEN: Gov. Hogan was clearly picking his battles Tuesday afternoon, claiming early success in this year’s Maryland General Assembly primarily because of the swift passage of the new state budget. But he urged lawmakers to use the remaining days of the session to get to work on two issues he said were important to Marylanders: income-tax relief and redistricting reform, reports Tamela Baker for the Hagerstown Herald Mail.

RURAL HEALTH CARE STUDY:  A bill providing for a study of health care in rural areas that would also put off any possible partial closing of the hospital in Chestertown has passed the Maryland state Senate and is currently before a House of Delegates committee, reports Jack Shaum for the Easton Star Democrat.

POLICE REFORM IN PERIL: The future of Maryland’s police accountability bill — a priority for lawmakers this year — could hinge on whether the measure should require Baltimore City to place civilians on police review boards, reports Ovetta Wiggins in the Post. The legislation passed out of committee this week but ran into trouble on the Senate floor because it would allow cities and counties to decide for themselves whether to include civilians on such panels and whether to allow them to vote.

CLEAN ENERGY BILL MOVES FORWARD: The Maryland Senate is moving forward on a proposal to increase the number of clean energy jobs in the state, despite objections that it will cause higher electricity costs. But, writes Bryan Renbaum for MarylandReporter.com, the bill also generated some trash talk because some of those “clean” energy jobs could be at trash incinerators that generate power.

ASSAULT POLICY REVAMP DIES: A bill that would require Maryland institutions of higher education to revamp their sexual assault policies will not receive a vote this year, setting up a debate between university officials and activists about how to address the problem on college campuses, Josh Magness reports for Capital News Service. 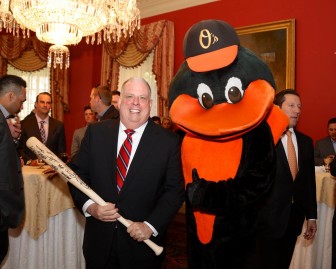 Gov. Hogan hosted the Orioles at Government House Tuesday, and got a bat signed by the team. With the bat and Taekwondo he seems well equipped for the closing days of the General Assembly.

HOGAN BREAKS GRIDLOCK WITH BARE HAND: Erin Cox of the Sun writes that Gov. Larry Hogan used his honorary ninth-degree Taekwondo black belt to usher in the state’s first Taekwondo Day honoring a martial art developed in the home country of Hogan’s wife, Yumi. To add a bit of politics to the day, the boards that he broke were labeled “Partisan Gridlock.” The video tops the story. 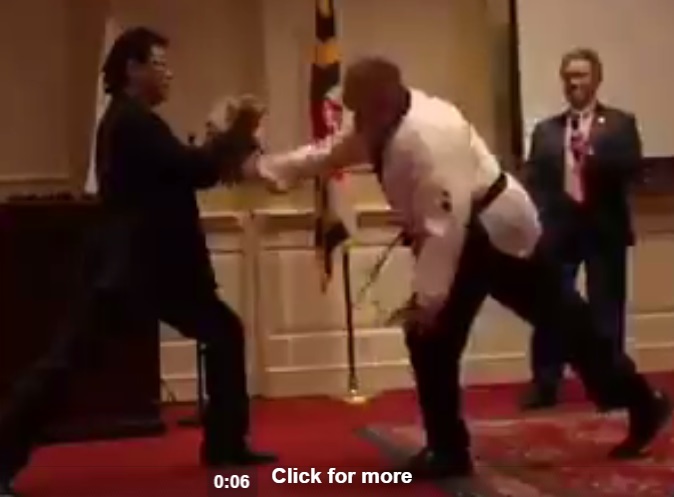 BPW EXPECTED TO OK PURPLE LINE PACT: The lengthy and complicated Purple Line agreement is expected to be approved today by the state’s Board of Public Works, reports Andrew Metcalf for Bethesda Beat. The $5.6 billion, 36-year agreement is more than 800 pages, with an additional 1,200 pages of technical provisions and design plans.

2nd BIGGEST GAMING MONTH: Maryland’s gaming industry had its second biggest month ever, bringing in $97.85 million in revenue in March, Jonathan Munshaw reports for the Baltimore Business Journal. The strong showing trailed only July 2015, when the state’s casinos brought in over $98.9 million in revenue, according to data released by Maryland Lottery and Gaming on Tuesday.

ON JAMIE RASKIN: The photo from Life magazine hangs on the wall of state Sen. Jamie B. Raskin’s Annapolis office. It shows his liberal-activist parents cooling their feet in the Lincoln Memorial Reflecting Pool, listening to Martin Luther King Jr. at the August 1963 March on Washington for Jobs and Freedom. So begins Bill Turque’s profile of state Sen. Jamie Raskin, now contender in the Democratic primary in Maryland’s 8th Congressional District.

ON JOEL RUBIN: Former State Department official Joel Rubin is running for the Democratic Congressional nomination in Maryland’s 8th District. Bill Turque offers up five things you should know about the candidate.