TRANSIT BILL VETOED QUICKLY: As promised, and faster than expected, Gov. Larry Hogan vetoed HB1013 on transportation project scoring Friday morning. We have a text of his letter explaining his decision.

THIS WAS NO JOKE: On April Fool’s Day, Gov. Larry Hogan played a whopper of a prank on the Maryland General Assembly: He vetoed a bill that brings public accountability and transparency to an important state government decision-making process. Political observer Barry Rascovar asks in a column for MarylandReporter.com: Surely, Hogan wasn’t serious about this veto. Right?

BILL SIGNING, VETO OVERRIDES: Hours after issuing his first veto of the year, Gov. Larry Hogan scheduled for today a bill signing for three measures, including one that requires at least $16.5 million to be spent on Baltimore City parks over the next four years, reports Erin Cox of the Sun. Hogan has objected in principle to those sorts of spending mandates, but has not ruled out endorsing them if he agrees with the policy.

BILL UPDATES: Today marks the start of the final week of this year’s General Assembly session, which will come to a close on April 11, writes Amanda Yeager for the Annapolis Capital. She updates the status of some of the more important bills going through the legislature.

HEROIN EPIDEMIC: Josh Hicks of the Post writes about the fast-growing heroin epidemic in Maryland as Gov. Larry Hogan and the Democratic-controlled legislature are weighing ideas for tackling it. Many solutions focus on loosening criminal penalties for drug offenses and shifting more money to treatment and rehabilitation programs. But some view those ideas with skepticism. They want the state to immediately and significantly expand long-term residential treatment.

JUSTICE REFORM: The House of Delegates on Friday advanced a sweeping bill that revamps the criminal justice system, favoring drug treatment over incarceration, reports Pamela Wood in the Sun. The Justice Reinvestment Act now moves to a final vote in the House this week. The state Senate already approved a version of the bill, but it differs significantly from the House version, so the differences will ultimately be addressed in a conference committee.

PAID SICK LEAVE, YES, BUT: Rebecca Lessner of MarylandReporter.com writes a column about the passage of HB 580, the Healthy Working Families Act that allows workers to earn paid sick leave. She’s working as a waitress to help pay off college loans and isn’t so sure that it’s a good idea to keep restaurant workers in the bill.

KEEP TANEY, ADD DOUGLASS: Phil Davis of the Annapolis Capital writes that as symbols of the Confederacy face increasing criticism across the country, a statue of a Supreme Court justice who helped uphold slavery in the 1850s is back in the limelight in Maryland. But for all the calls to remove Roger Taney’s visage from the Statehouse grounds, one man wants a compromise: To contrast Taney with one of the era’s noted abolitionists, fellow Maryland native Frederick Douglass. 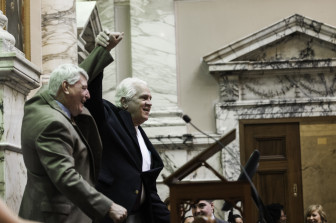 APRIL FOOLS! When Michael Busch presides over the state Senate and Mike Miller takes the gavel in the House of Delegates, you know which day it is, Michael Dresser and Erin Cox of the Sun report. House Speaker Busch and Senate President Mike Miller marked April Fool’s Day by switching roles at the opening of each chamber’s session Friday.

SANDERS, CLINTON IN MARYLAND: Democratic candidates for president have started to ramp up their campaign operations in Maryland, scheduling a series of events for a late primary in a state that in other election years has been an afterthought. The campaign of Democratic front-runner Hillary Clinton had scheduled an event in Howard County on Sunday featuring Sen. Ben Cardin. Vermont Sen. Bernie Sanders’ campaign opened an office in Baltimore on Wednesday, writes John Fritze for the Sun.

VAN HOLLEN POLL GIVES HIM EDGE: Rep. Chris Van Hollen appears to have taken a small edge in the heated Senate primary race against fellow Rep. Donna F. Edwards, according to polling conducted by his campaign, writes Rachel Weiner for the Post.

JEALOUS BACKS EDWARDS: Benjamin Jealous, the former head of the NAACP who briefly flirted with running for Maryland’s open Senate seat last year, endorsed Rep. Donna F. Edwards for the job on Friday, pointing to her commitment to urban communities and criminal justice reform, writes John Fritze for the Sun.

ON DAVID TRONE: In this first of a series of profiles of congressional candidates running in the 8th, Bill Turque writes that David Trone was a kid on his family’s chicken and hog farm in southeast Pennsylvania, not a Potomac wine retailer and philanthropist, when he first thought about entering politics. He admired the local congressman, a moderate Republican named Bill Goodling. Most of all, though, he wanted to run as Tom Trone’s son.

TRONE CRITICIZES SOME CONTRIBUTIONS: David Trone, the wealthy businessman running for Congress in Maryland’s 8th District, is taking a dig at one of his opponents over what he describes as indirect contributions from the oil and gas industry. Trone wrote in a letter to Greenpeace this week that the environmental group created a loophole in its anti-fossil fuel campaign pledge by allowing candidates to accept donations from other campaigns that had taken money from the energy industry, John Fritze of the Sun reports.