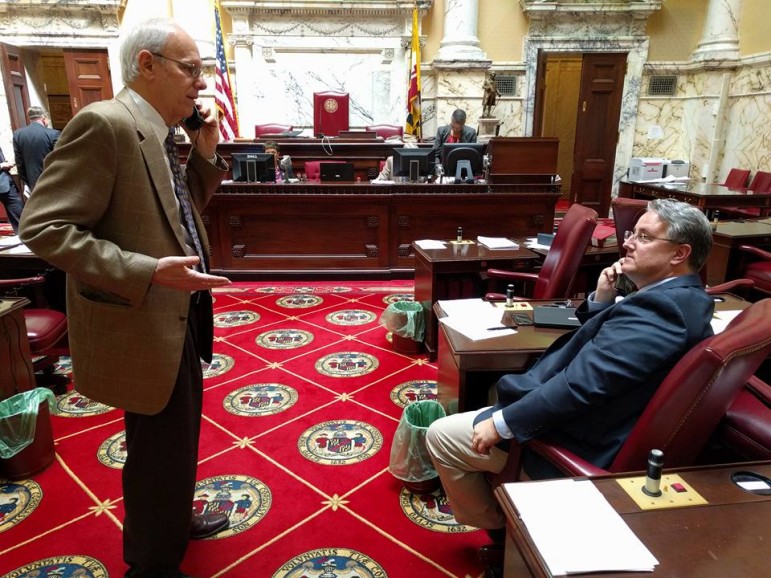 Sen. Paul Pinsky, left, and Sen. Richard Madaleno, floor leader of the College Affordability Act, Sen. Bill Ferguson put the photo on his Facebook page with the comment: “Want to know what legislating is like? This picture captures it. Two legislators on the floor, each on the phone trying to negotiate a compromise amendment to an important college affordability bill to help Marylanders.”

With the cost of college rising and student loan debt a growing issue, the Maryland Senate Friday passed legislation that establishes a matching state contribution to eligible college savings accounts and creates a refundable tax credit of up to $5,000 for undergraduate student loan debt.

UPDATED 4/7/2016: The House of Delegates greenlighted the Senate’s changes and gave final passage to the highly debated bill and passed it 92-45, sending it to Gov. Hogan for his signature. Republicans voted against the bill because it mandates up to $52 million in new spending over the next five years, and Hogan urged the legislators to stop passing mandates.

Because of the spending mandate, most Senate Republicans voted against the bill when it passed 34-11.

The Senate version of the bill, SB676, ran into problems on the floor last Wednesday over its initial requirement that students take 15 credits of courses each semester. University officials had testified that students who do not carry a full course load are less likely to get a degree.

The Senate eventually agreed on a compromise of 30 credits per year, including summer semesters.

The matching fund is designed to give incentives to families, especially lower income families, to invest in college savings accounts. In order to increase participation, the state would match the donations and provide an additional $250 per year for amounts as low as $25 for single people making less than $50,000 or $100,000 for a family.

The bill creates a tax credit worth up to $5 million that would help students in debt. Those who qualify would be students who had, at some point, more than $20,000 of undergraduate student debt and still have more than $5,000 in outstanding loans.

Eligible candidates could apply to the Maryland Higher Education Commision (MHEC) for a credit in an effort to relieve some financial burdens. MHEC would award the credits based on income levels it would set.

The legislation would permit students with as much as $250 in unpaid balances to register for classes for an upcoming semester. If a student owes more than $250, the university would put the student on a payment plan, thus making it more feasible for the student to graduate.