REGISTERING TO VOTE: Gregory Carpenter owns a home and a small business. He’s more than four decades removed from the armed-robbery conviction that landed him in prison for 20 years, and he has spent the past two decades working with the NAACP in the community. But he remains on parole. On Thursday, reports Colin Campbell in the Sun, the 62-year-old Carpenter and others like him removed what they say has been a stigmatizing barrier to their full re-entry into society: They registered to vote.

ABANDONING GERRYMANDERING TOGETHER: In deep-blue Maryland, Democratic state lawmakers have shown little interest in giving up their power to redraw the boundaries of congressional districts every 10 years. The Republicans who control the legislature in Virginia are similarly unwilling, reports Fenit Nirappil for the Post. But with both states’ congressional maps under attack for unfairly favoring the majority party, a few lawmakers have come up with a new suggestion: Why don’t we give up our power together, negating the political effects?

WEAKENED NOAH’S LAW: Versions of the bill that requires all convicted drunk drivers to use ignition interlock devices have been before the General Assembly for years, but have repeatedly stalled in the House of Delegates. The bill is finally moving forward in the House, with a key debate scheduled for this  morning, but the man who is pushing the bill on behalf of his late son said the legislation is now too weak to do much good, reports Pamela Wood in the Sun.

EVIDENCE EXCLUSIONS: Prosecutors heavily criticized Thursday a bill they said would “attempt to change hundreds of years of Supreme Court case law” but advocates said ensures police would not be rewarded for conducting searches without probable cause, reports Heather Cobun for the Daily Record. Del. Curt Anderson, D-Baltimore City, said House Bill 615 would strengthen Maryland’s exclusionary rule for evidence in criminal trials to remove good faith and other exceptions recognized by courts.

EDUCATION FUNDING: There has been much talk of bipartisanship at the State House this legislative session, but not a lot of evidence of it, until Thursday morning in the Senate, writes Len Lazarick for MarylandReporter.com. “I want to thank the governor,” said Senate President Pro-tem Nathaniel McFadden, the chair of the all-Democrat Baltimore City delegation. Republican Gov. Larry Hogan on Thursday morning provided an additional $12.7 million in his third supplemental budget for Baltimore City schools.

MORGAN SEEKS TECH BUCKS: A sweeping proposal to create a single University of Maryland with campuses in Baltimore and College Park includes millions of dollars to support the commercialization of university research. Now, Morgan State University wants a piece of the action, too. Daniel Leaderman of the Daily Record reports that the historically black research institution is asking lawmakers for $3 million to support its Office of Technology Transfer, which helps students, faculty and staff guide their research discoveries to the marketplace.

FUTURE OF ONLINE ASSETS: Under the cross-filed Senate Bill 239 and House Bill 507, the online service industry would be relieved of the cost and responsibility of handling a person’s digital assets (electronically-stored videos, pictures, manuscripts, emails, social media and other content) after death. The practical effect will be to strengthen the industry’s hand in continuing to deny families access to the contents of a deceased loved one’s online accounts, irrespective of the decedent’s wishes expressed in any last will and testament. In this commentary for the Daily Record, lawyers Bill McComas, Jay Merwin and Gary Almeter deride the legislation as pandering to the industry.

BIKER PROFILING: Bikers rolled into Annapolis on Thursday to support a bill that would require police to be instructed not to profile them based solely on their membership in a motorcycle organization, Heather Cobun reports for the Daily Record.

HOGAN’S EMPIRE: Gov. Larry Hogan has built a very large and formidable social media empire in a world of increasingly small mainstream media, writes Adam Pagnucco for Seventh State blog.  Policy debates in Annapolis, and their political implications, are increasingly occurring in the context of a shrunken mainstream media. The Sun and the Post have dramatically cut back on their statehouse coverage. The Gazette is no more. The Daily Record is hidden behind an expensive paywall. 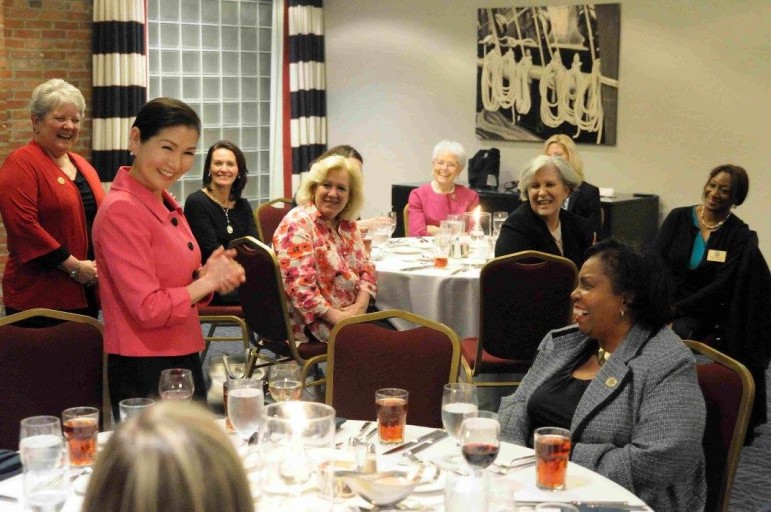 CITY POLICE COMMISSIONER TERM: The Maryland Senate on Thursday unanimously approved a bill that would help Baltimore avoid paying costly severance packages when the city dismisses a police chief, Erin Cox writes in the Sun. No other jurisdiction in Maryland has the same problem as Baltimore, where the term of the police commissioner is set in statute at a minimum of six years. That means every police chief’s contract must be negotiated for that long, even though the city hasn’t had a chief stay in the job that long for decades, lawmakers said.

FROSH JOINS SUPREME DEBATE: Twenty-one Democratic Attorneys General — including Maryland’s Brian Frosh — sent a letter to congressional Senate leaders on Thursday calling for them to consider President Barack Obama’s nominee for the Supreme Court once that person is named, writes John Fritze for the Sun.

HOGAN TO ATTEND SISTER’S FUNERAL: Gov. Larry Hogan was to leave the state Thursday evening to attend his sister’s funeral in North Carolina on Saturday. The governor’s older and only sister Mary Theresa Lazarus died last Saturday at 66 from a rare degenerative brain disorder, writes Erin Cox for the Sun.

MAYOR HOPEFULS DEBATE: Many of the leading candidates to become Baltimore’s next mayor expressed concerns Thursday night over the $535 million proposal to provide tax increment financing for the massive Port Covington development, writes Luke Broadwater for the Sun. The debate was held at the Murphy Fine Arts Center at Morgan State University.

ALL THE MAYORAL CANDIDATES: Here’s a link to the City Paper’s edition focusing on the mayor’s race and including lots of information on even the most obscure candidate.

VAN HOLLEN TOUTS TUBMAN: Rep. Chris Van Hollen is sponsoring a measure to put a statue of abolitionist Harriet Tubman at the U.S. Capitol. The Maryland Democrat was to make the announcement Thursday on Harriet Tubman Day, the anniversary of her death in 1913, according to an AP story in the Salisbury Daily Times. In 2012, Maryland lawmakers formed a panel to find an artist and pay for a statue to donate.

6th DISTRICT CONGRESSIONAL DEBATE: Republican 6th Congressional District candidates had plenty of overlap in their positions during a lengthy debate Thursday night in Frederick. The debate mainly highlighted their stances on the economy, but also on other prominent issues, such as Obamacare, foreign relations and security, reports Jeremy Bauer-Wolf for the Frederick News Post.

RUBIO’S COMEBACK: Marco Rubio finally made a strong showing in the latest Republican presidential debate, writes Richard Vatz for MarylandReporter.com. But will this make a difference in his standing in the primaries?

CARSON TO ENDORSE TRUMP: Conservative favorite Ben Carson, who last week suspended his campaign for the Republican presidential nomination, plans to endorse Donald Trump on Friday morning, according to two people familiar with his thinking, Robert Costa reports for the Post.

BALD EAGLE DEATHS: Thirteen bald eagles found dead on the Eastern Shore last month did not die of natural causes, federal wildlife officials said Thursday. Christina Jedra of the Annapolis Capital reports that necropsy results of the eagles found in Federalsburg on Feb. 20 ruled out disease, including avian influenza, according to the U.S. Fish and Wildlife Service.