REVENUE ESTIMATES CUT BY $51M: CNS’s Connor Glowacki writes in MarylandReporter.com that the Maryland Board of Revenue Estimates on Wednesday decided to write down state revenue estimates for fiscal 2016 and 2017 by approximately $51 million from those made last December. State Comptroller Peter Franchot said the new estimates reflected weak sales throughout Maryland during the recent holiday season. Economic growth has continued to be stagnant in the last few months. 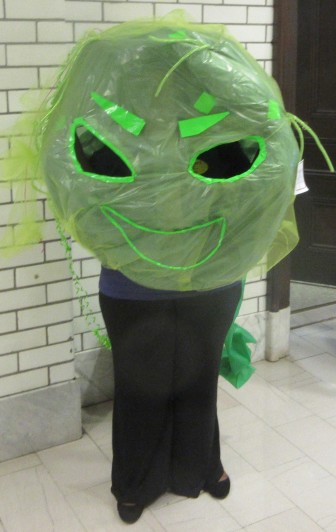 Was it a space alien in the hallway outside the State House press rooms? No, it was a hacking, snorting “germ,” there to promote legislation for earned sick leave.

BEE SMART BILL: The state Senate approved a bill Wednesday that will remove some pesticides from retail store shelves, reports Pamela Wood in the Sun. The Senate voted 32-14 to pass the Pollinator Protection Act, which bans consumers from using a class of pesticides called neonicotinoids, which are believed to harm bees and other pollinators.

GUN CONTROL DEBATE CONTINUES: Hundreds of people arrived in Annapolis on Wednesday to debate whether Maryland’s already strict gun laws should go further in restricting access to firearms — or if they go too far already. Erin Cox and Pamela Wood of the Sun are reporting that the legislature is weighing more than a dozen gun control proposals that advocates say would close deadly loopholes and opponents contend would further infringe on their Second Amendment rights without making the public any safer.

AIDING SEX ABUSE SURVIVORS: Sexual abuse survivors and advocates urged lawmakers Wednesday to increase the statute of limitations to file civil lawsuits alleging child sexual abuse to 20 years after the victim’s 18th birthday, writes Lauren Kirkwood for the Daily Record. Victims of child sexual abuse now have seven years, or until they turn 25, to file civil litigation. But many do not come forward to report the abuse until decades have passed.

INTERLOCK LAW WEAKENED: Advocates who have been pushing for seven years to expand the use of interlock ignitions for drunk drivers in Maryland were elated last week when the House Judiciary Committee unanimously passed the measure. This week, they are not as happy with the bill, reports Ovetta Wiggins in the Post.

UM PARTNERSHIP ACT VOTE DELAYED: Darcy Costello and Grace Toohey of the Diamondback report that the Maryland Senate delayed a vote yesterday morning on the amended version of the Strategic Partnership Act of 2016, which would combine this university with the University of Maryland, Baltimore to create one University of Maryland with two campuses.

HEALTHIER VENDING MACHINES: Vending machines are stocked with many guilty pleasure snacks and beverages. But people might see less of these traditional snacks and drinks in certain areas if the legislature passes HB 1498. Alessia Grunberger of MarylandReporter.com reports that the bill would require that at least 75% of packaged food and beverage options on state owned or managed grounds meet a healthy standard, said bill sponsor Del. Antonio Hayes, D-Baltimore City, when he introduced it to the House Economic Matters Committee on Wednesday.

ENVIRONMENTAL GROUPS SUE EPA: The Environmental Protection Agency may have broken federal law by removing dozens of Maryland waterways from its impaired water list, according to a lawsuit filed Tuesday. Christine Jedra of the Annapolis Capital reports that six area waterkeeping organizations allege the EPA violated the Clean Water Act when officials excused 53 river segments — some in Anne Arundel County — from “total maximum daily load” requirements in 2012, according to the lawsuit filed in federal district court in Washington, D.C.

VAN HOLLEN BACK ON AIR: Rep. Chris Van Hollen’s campaign for Senate is back on the air Wednesday with a new advertisement that comes after a series of polls show the race for Sen. Barbara Mikulski’s seat is a tossup, writes John Fritze for the Sun.

PUGH, DIXON TIE IN POLL FOR MAYOR: Sen. Catherine Pugh and former Mayor Sheila Dixon are locked in a virtual tie in the Democratic race to become Baltimore’s next mayor, a new poll for the Baltimore Sun and the University of Baltimore shows.The Sun’s Luke Broadwater writes that Pugh, whose support has surged in recent weeks, is now favored by 26% of likely voters in the Democratic primary. That’s two points higher than the 24% who back Dixon, who has led the field for months. Businessman David L. Warnock, who has spent more than $650,000 on television ads, is in third place with 10%.