MENTAL HEALTH CARE ADVOCATES RALLY: Hundreds of advocates for mental-health and substance-abuse treatment rallied in Annapolis on Thursday for something Gov. Larry Hogan is pushing to tame: automatic spending increases. With the legislature nearing the halfway point of its 90-day session, activists gathered outside the State House to support legislation that would tie the state’s ­behavioral-health funding to the rate of inflation for medical costs, Josh Hicks and Ovetta Wiggins of the Post are reporting. 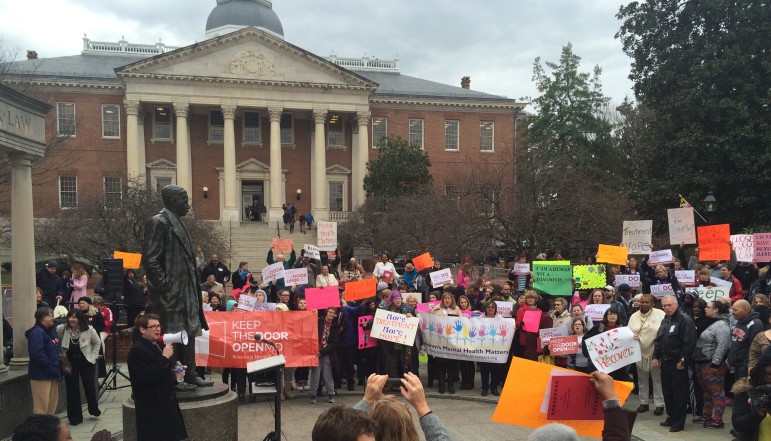 LIVESTREAMING & HOGAN’S PERCEPTION: Bryan Sears in the Daily Record writes: If you’re in favor of the idea of live streaming voting sessions from the floor of the Maryland House and Senate there’s a reason why you can’t have nice things — Maryland Public Television. Miller and Busch both independently invoked the name of the state-funded broadcasting network when asked about the issue. (This interesting blog post is not the behind the usual paywall and can be read in full.)

EXPUNGEMENT BILL: Heather Cobun of the Daily Record reports that the logistics of a proposed bill that would allow people with multiple criminal charges from one incident to expunge the ones that qualify for removal from their record were questioned at a committee hearing Wednesday, with judges and prosecutors objecting to the measure on practical grounds. Senate Bill 328, introduced by Sen. Joan Carter Conway, would permit partial expungements when some charges in a unit did not result in a conviction.

TRANSIT RECORDING: The Maryland Senate delayed its debate on whether to restrict audio recording on public buses and trains until Tuesday. Several senators and local transit agencies have raised questions about the bill, spurring the drafting of amendments. Senators agreed on Thursday to bump debate a few days to allow time for amendments to be written and for further research on the bill, Pamela Wood of the Sun reports.

BUSINESS INCENTIVE BILL: Gov. Larry Hogan’s proposal to attract new manufacturing jobs to the state with a 10-year tax credit is “not ready for prime time” according to the vice chairman of the House Ways and Means Committee. Bryan Sears of the Daily Record reports that Del. Frank S. Turner, D-Howard, made the comments Tuesday after almost an hour of testimony and tough questions from lawmakers. At several times during the hearing, Department of Commerce Secretary Michael Gill responded to criticism from lawmakers by expressing a willingness to amend the bill — sometimes heavily.

CONFEDERATE FLAG: The Maryland House has passed a measure prohibiting the transfer or renewal of a license plate depicting the Confederate battle flag to another vehicle, according to an AP story by Brian Witte in the Daily Record. The House voted 131-8 on Thursday for the bill. It now goes to the Senate. Maryland does not now offer plates with the Confederate battle flag. But prior to November, the Motor Vehicle Administration offered a Sons of Confederate Veterans organizational special registration plate that included it.

SETTLEMENT SALVATION: Attorney General Brian Frosh urged lawmakers Thursday to pass legislation protecting holders of structured settlements, who have already suffered personal injuries, from a “predatory” purchaser who preys on their imminent need for money by offering them just pennies on the dollars due them, reports Steve Lash for the Daily Record. “Some of our most vulnerable citizens have been victimized twice,” Frosh told the House Judiciary Committee, referring to the physical injury followed by the financial victimization.

SMALL-STAKES CARDS: The House of Delegates unanimously voted Thursday to legalize small-stakes card games in homes and senior-living facilities, sending the bill to the Senate for consideration, reports Michael Dresser for the Sun. Maryland law currently forbids even penny-ante games among family members — a provision many consider archaic and intrusive.

ED ADVOCATES SEEK MORE FUNDING FOR CITY: Pamela Wood writes in the Sun that education advocates called on Gov. Larry Hogan Thursday to send more money to Baltimore schools. Standing outside the gate of the governor‘s mansion in Annapolis, members of the Baltimore Education Coalition said after a tough year in Baltimore, city students need all the help they can get. A good education is a “ticket out of poverty,” said Del. Cheryl Glenn, a Baltimore Democrat.

KIDS LOBBY IN ANNAPOLIS: About 400 high school students in shiny black heels and neatly knotted ties formed a long line outside the Lowe House Office Building in Annapolis Thursday morning to ask elected officials to pass bills they support, writes Cindy Huang for the Annapolis Capital. They want Anne Arundel County schools to be able to hire experts in certain subjects without a state certificate. They want to ban free plastic bags from supermarkets. And they want students to have more power on county school boards.

6TH DISTRICT GOP DEBATE: National issues were brought down to the local level Thursday night, as Washington County voters got a chance to hear from the field of Republicans looking to unseat Democratic U.S. Rep. John Delaney in the 6th Congressional District. Seven of the eight candidates running for the GOP nomination in the April 26 primary were in attendance at the Funkstown American Legion for a lively debate on a wide array of topics, including national security, immigration reform and the economy. CJ Lovelace reports the story for the Hagerstown Herald Mail.

***8TH DISTRICT DEBATE SUNDAY: Nine Montgomery County Democratic clubs and the Democratic Central Committee are sponsoring a debate for to all nine of the Democratic candidates for the 8th Congressional District this Sunday, Feb. 28 from 3 to 5 p.m. at Walt Whitman High School, 7100 Whittier Blvd., Bethesda. 20817. The debate will be moderated by former Montgomery County Councilmember Gail Ewing.***

MAYOR HOPEFULS ON TRANSIT: Last year, Gov. Larry Hogan shocked Baltimore officials when he rejected $900 million in federal funding to kill the city’s long-planned East-West light rail called the Red Line. With the massive project dead, eight of the leading Baltimore mayoral candidates, including seven Democrats, gathered Thursday to answer the question: Now what? The forum held at the Real News Network focused solely on transportation issues; so the format gave the audience more time to dive into topics like bike lanes, water taxis and buses than during a typical debate, Luke Broadwater reports for the Sun.

CNN GOP DEBATE: The new aggression against Trump may be due to the fact that source after source cites Thursday’s debate as the Republicans’ last chance to stop Trump, although warnings of a last chance tend to be not a one-time warning. Rick Vatz and Len Lazarick dash off quick commentary on Thursday’s debate, laughing and cringing.