TEARING DOWN BALTIMORE JAIL: Six months after abruptly closing the Baltimore jail, Gov. Larry Hogan is putting forward an ambitious plan to tear down the troubled facility and build a modern corrections complex. His plan to more quickly demolish the Civil War-era jail complex and erect a Baltimore Justice Center in its place would save the state hundreds of millions of dollars, Hogan administration officials say, but would require the delay of several costly projects at Maryland universities, Justin Fenton and Erin Cox write in the Sun.

K-12 FUNDING SAFE: Josh Hicks of the Post reports that Gov. Larry Hogan’s proposal for mandate relief does not affect the state’s K-12 education-funding formulas, contrary to Democrats’ concerns that he would target the requirements as part of his plans to reduce automatic spending increases.

ODD COMPARISON: Comptroller Peter Franchot is being criticized for comparing the lack of air conditioning in Baltimore County and Baltimore City public schools to contaminated drinking water in Flint, Mich. He made the comparison during the Board of Public Works meeting Wednesday before Gov. Larry Hogan, Treasurer Nancy K. Kopp and Franchot voted to allow schools to use state construction money to install portable air conditioners, Pamela Wood of the Sun reports.

LEAD PAINT PROBE: State officials are urging nearly 400 families to find out whether their children may have lead poisoning after launching an investigation of a private inspector who they say improperly certified rental properties as lead-free.Luke Broadwater of the Sun writes that the Maryland Department of the Environment said it is partnering with the U.S. Environmental Protection Agency in the investigation of an unnamed individual involved in 384 inspections in Maryland, including Baltimore and its suburbs. 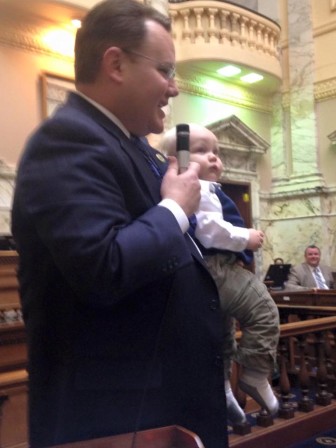 LIVE STREAMING LEGISLATION: A conservative Republican leader and one of the most liberal Democrats in the House of Delegates are co-sponsoring legislation that would require video streaming of all sessions of the House and Senate and their committees, including voting sessions, reports Len Lazarick of MarylandReporter.com. The bill, HB316, sponsored by House Minority Whip Kathy Szeliga, a Baltimore County delegate running for U.S. Senate, and Del. David Moon, D-Montgomery County, faces likely opposition from Senate and House Democratic leaders who have blocked video of floor sessions and the crucial committee voting sessions.

HELPING ORPHANS WITH COLLEGE: The Maryland Senate on Thursday passed a bill sponsored by Frederick County Sen. Ron Young to create the Maryland Loan Assistance Repayment Program for Orphans and Foster Care Recipients, reports Danielle Gaines in the Frederick News Post. The bill would help young people who grew up orphaned or in foster care repay their college loans, as long as they attend a state college and work full time for the state or a municipal government.

HOGAN’S UNSOUND REFORM: David Brunori, writing in the Tax Notes blogs, says, “I  thought there was hope for Maryland. Republican Gov. Larry Hogan seems like a moderate guy compared with most Maryland pols. I had hoped the governor would release a comprehensive tax plan to broaden the base and reduce rates in a state long known for its bad tax policy. Instead, Hogan has proposed the opposite of sound, comprehensive reform.”

SENTENCING DISCRETION: Amanda Yeager of the Annapolis Capital writes that Shane Pardoe was sentenced to 55 years in prison for the February 2000 murder of Bobby Hightower in Glen Burnie. But in 2014, an Anne Arundel County judge decided to release Pardoe after he’d served 14 1/2 years in prison. On Thursday, Hightower’s family testified in favor of a bill introduced by Sen. Bryan Simonaire that seeks to limit the discretion judges have to reduce sentences post-trial. But the state’s public defenders are concerned that making it harder to reduce a prisoner’s sentence could weaken incentives for good behavior and compliance with treatment programs.

FAMILY VISITATION RIGHTS: Two years since the death of disc jockey Casey Kasem, one of his daughters is lobbying Annapolis to prevent other adult children from going through the ordeal she experienced in her father’s final months, Elisha Sauers reports in the Annapolis Capital. Kerri Kasem, 43, visited Annapolis Thursday to testify in the Maryland legislature on a measure to protect visitation rights for friends or family members of sick, disabled or dying people.

NO-FAULT BIRTH FUND: Legislation that would create a special fund for the care of babies who suffer neurological injuries during birth has been reintroduced in the Maryland General Assembly, setting the stage for another showdown between hospitals and the state’s trial lawyers, reports Daniel Leaderman in the Daily Record. Del. Dan Morhaim has once again proposed creating a no-fault birth injury fund, which would allow families to be compensated without filing malpractice claims but also require them to give up their right to sue.

FIXING TAX GLITCH: Maryland’s top tax collector said his agency is well on its way to fixing a problem that sent tax money to a number of municipalities in Montgomery County in error, reports Bryan Sears in the Daily Record. Comptroller Peter Franchot blamed the glitch on a complicated tax system unique to that county and said his agency would fully reimburse Montgomery County for tax dollars it should have received over the last five years, as well as create a payment plan for the smaller jurisdictions that were paid out more money than they were due.

TRONE’S MONEY: David Trone is jumping into the race for the Democratic nomination for the Eighth Congressional District. He calls himself a “strong Democrat” but will have to explain quickly his major heavy donations to Republican candidates, writes David Lublin for Seventh State blog.

MATTHEWS PULLS IN THE LOOT: Kathleen Matthews, the former television news anchor and Marriott executive running in the 8th Congressional District, will report raising just over $500,000 in the fourth quarter of 2015, another significant haul for the first time candidate, John Fritze reports in the Sun.

8th DISTRICT FORUM: Two Republicans joined seven Democratic candidates in Maryland’s 8th Congressional District at a campaign forum Wednesday night, using the moment to argue that with the House likely to remain under GOP control next year, they would be the better choice for voters, reports Bill Turque in the Post.

CHANGES IN CITY HALL: No matter who is elected mayor of Baltimore City this year – even if it’s a retread like Sheila Dixon, even with veteran City Council President Jack Young well on the road to re-election – there’s a big change coming to City Hall and the local political discourse, writes Josh Kurtz in Center Maryland.  That’s because four of the City Council’s 14 members who are elected by district have already announced their plans to retire, and others could follow – voluntarily or otherwise. This is a good thing.

ON THE GOP DEBATE: Richard Vatz and Laslo Boyd watched last night’s Republican debate — which was sans Donald Trump — and each sums up the affair for MarylandReporter.com. While Trump was mentioned, he apparently wasn’t missed as talk turned to issues.

MISSING THE BERN: Political commentator Richard Cross, writing in Center Maryland, says when it comes to Maryland’s primary election on April 26, the good news and the bad news is that both presidential nominations will likely be settled before the madness gets here. This will spare Marylanders much of the drama and partisan pathos we have witnessed in Iowa and New Hampshire.  In that respect, Maryland is kind of like the skipped venue on a WWE national tour. But it also deprives us opportunities to witness up close the phenomenon that is Sen. Bernie Sanders’ candidacy.

LOST CAMERA: A small silver Canon SureShort camera got left behind at the Death With Dignity news conference Thursday. If found, contact Len@MarylandReporter.com or 410-499-5893.