COMMERCE TO MOVE BUREAU TO MD: Nearly 600 federal workers will be relocating from the District of Columbia to Prince George’s County this summer, after the Department of Commerce announced on Friday that it would move its Bureau of Economic Analysis to the Suitland Federal Center, reports Ovetta Wiggins for the Post.

TUG OF WAR OVER SURPLUS: Gov. Larry Hogan wants to cut $71 million in fees over the next five years, including one that would save utility customers about 15 cents a month, write Erin Cox and Michael Dresser for the Sun. But the Republican’s plan to pay for the relatively small break is on collision course with leading Democrats, who want to use the same pot of cash to create more clean-energy jobs. The conflict sets up yet another front in the ongoing battle over how to spend the first state surplus in nearly a decade, and illustrates how even mundane initiatives can become partisan fights.

GROWING STATE ECONOMY: Grant Zeigenfuse of MarylandReporter.com reports that the chief economist with Moody’s Analytics said that while Maryland’s economy is performing close to the national average, it needed to do more to grow its performance. Mark Zandi told the Senate Budget and Taxation Committee that Maryland should focus on reducing key taxes and costs, investing in infrastructure, and reducing the perception of business unfriendliness.

HELP SMALL BUSINESS: The Sun editorial board opines that while it would prefer to see Gov. Larry Hogan and the General Assembly pursue broad reforms of Maryland’s tax and fee structure to improve its competitiveness and fairness, some of the targeted ideas Hogan unveiled are intriguing, such as the acceleration of increases to the Earned Income Tax Credit. “We do wish, though, that he would revive an unheralded part of his agenda from last year: exempting small businesses from the personal property tax. The way the levy currently works for small businesses is simply idiotic.”

MARYLAND’S BUDGET & OUTSIDE WORLD: Tumbling oil prices, a bear market for stock and 401(k) investors and a sharp economic pullback in China and other developing countries could wreak havoc in Maryland as Gov. Larry Hogan prepares to release his budget for the coming fiscal year, writes columnist Barry Rascovar for MarylandReporter.com.

CURBING GUN VIOLENCE: Attorneys general from Maryland, Virginia and the District of Columbia met on Friday to coordinate efforts on reducing gun violence and illegal gun trafficking in the region, CNS’s Troy Jefferson reports in the Daily Record. “The folks who are doing the crimes are doing it across the borders,” Maryland Attorney General Brian E. Frosh said at a news conference. “We clearly have a problem regionally.”

DEATH WITH DIGNITY: A renewed death with dignity bill before the Maryland General Assembly is modeled on Oregon’s Death with Dignity Act, and would allow a terminally ill adult who is mentally competent to request and obtain a prescription that can be self-administered to bring about a peaceful and humane death should the person’s suffering become unbearable. The patient must be diagnosed with no more than six months to live, Mike Persley of the Frederick News Post writes about one woman’s fight to get the bill passed.

CLARITY SOUGHT ON FANTASY SPORTS LEAGUES: Daily fantasy sports leagues in Maryland should have been placed on the ballot in 2012, and state legislators now need to clarify whether the popular sports betting sites are legal, according to an attorney general’s advisory letter. Bryan Sears of the Daily Record reports that the 22-page letter differentiates traditional fantasy sports — the so-called beer and Fritos leagues — from sites such as FanDuel and DraftKings. But the letter stops short of ordering the sites to cease operations in Maryland.

CARROLL ATTORNEY APPOINTED: Gov. Larry Hogan has appointed Carroll County State’s Attorney Brian DeLeonardo to the Maryland Commission on Criminal Sentencing Policy, Heather Mongilio of the Carroll County Times reports. This is the first time a state’s attorney in Carroll County has received a gubernatorial appointment, according to a news release from DeLeonardo’s office. He is the only member on the commission from Carroll County, according to its online member list. 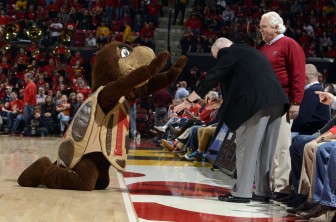 UMd Terrapins mascot Testudo the turtle bows to Gov. Hogan and Senate Prez Mike Miller. It looks like Hogan is bowing back. Photo by Greg Fiume of Maryland Athletics

HOGAN, MILLER SOLVE WORLD PROBLEMS: After a week of talking about the importance of communication without doing much of it, Republican Gov. Larry Hogan and Democratic Senate President Mike Miller spent two hours Saturday chatting together courtside at the University of Maryland basketball game, Erin Cox of the Sun reports. “We solved  almost everything,” Hogan said and laughed after the men’s team blew out Ohio State 100-65. “We talked about everything, but mostly basketball. We’re communicating great.” 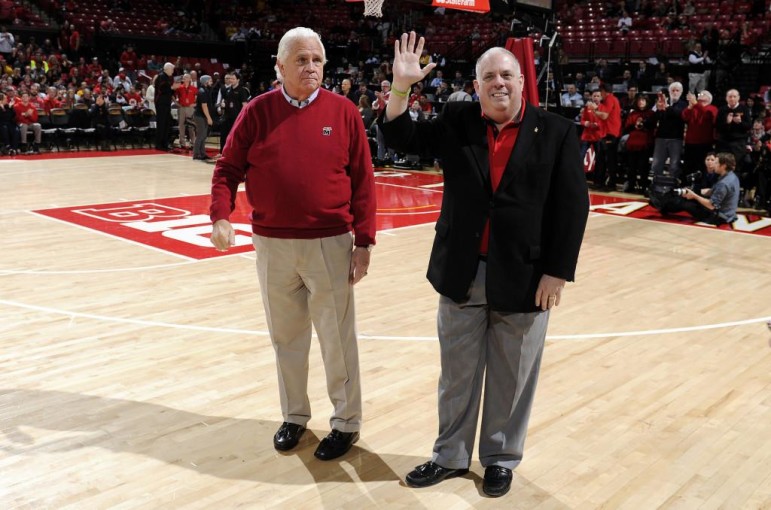 Gov. Larry Hogan waves to crowd from center court of the Xfinity Center in College Park, with Senate President Mike Miller at his side. Photo by Greg Fiume of Maryland Athletics on Hogan’s Facebook page.

CLOSING PURCHASING LOOPHOLE: Del. Haven Shoemaker has proposed legislation that he says will eliminate any appearance of political favoritism if a governor wants to purchase furniture from the governor’s mansion in Annapolis, reports Doug Donovan for the Sun. The Carroll County Republican’s bill would require that the Department of General Services, which manages state property, obtain final approval from the Government House Trust before declaring any furnishings from the mansion as surplus property. The designation renders such items eligible for public sale or transfer to other agencies or charities.

A QUESTIONABLE PLAN: Matt Hill of the Public Justice Center and North East Housing Initiative board members Chris Lafferty and Ty Hullinger, in an op-ed for the Sun, outline the reasons why they are skeptical of Gov. Hogan’s planned $700 million investment into Baltimore City.

BUSINESS-SCHOOL CONNECTION: In an op-ed for the Sun, former Maryland Public Schools Superintendent Nancy Grasmick writes about the historic bond between education and business

MONUMENTS OLD & NEW: People cheered and chanted “this is what democracy looks like!” as they stood today in front of Baltimore’s memorial honoring Confederate generals Robert E. Lee and Stonewall Jackson, recommended for removal by a panel this week, writes Fern Shen for Baltimore Brew. Some whooped and laughed as they dropped pictures of Lee and Jackson into a toilet festooned with media business cards, a smiley face sticker and a copy of the U.S. Constitution. Each photo was set on fire, to the delight of the crowd.

AN OFFICIAL TARTAN? Paul Wiedorn, a Severna Park resident, loves the Maryland flag and Celtic culture so much he has combined those interests and created a Scottish tartan based on the flag’s color scheme. But it’s not enough that he learned how to create an original tartan, with criss-crossed shafts of red, yellow, black and white, evoking the Calvert family arms. It’s not enough that he copyrighted the design and had a weaver produce a dozen yards of it. He’s thinking more grandiose: a designation for the pattern as the official state tartan, Elisha Sauers of the Annapolis Capital reports. There’s a short video topping the story.

FREDERICK TACKLES RX POT: Midway through January, there are already nearly half as many bills before the Frederick County Council compared with what was considered in all of 2015. The council is exploring the zoning regulations that would allow medical marijuana to be grown in the county, as well as controversial increases to fees that developers pay, which would pull in money for school construction. Jeremy Bauer-Wolf and Danielle Gaines offer a roundup of bills.

WA CO LEADS IN RECYCLING: For the second year in a row, Washington County ranks among the leading Maryland jurisdictions in recycling rates, according to statistics recently released by the Maryland Department of the Environment. CJ Lovelace of the Hagerstown Herald Mail reports that the county’s recycling rate of 60.59% in 2014 is a slight dip from a year before, but it still managed to beat the second-place figure of 59.03% in Prince George’s County.

NO BACKGROUND CHECKS: The Anne Arundel County school board nominating commission does not do background checks on candidates that it recommends to Gov. Larry Hogan for seats on the Anne Arundel County school board. If it had, it would have discovered that two candidates had records of bankruptcy. One of those candidates withdrew his application Saturday, a few days after The Capital began asking about his legal history, reports Cindy Huang for the Annapolis Capital.

HOW O’MALLEY FARED: The AP is reporting in the Sun that at the Democratic presidential debate in Charleston, S.C., Sunday night, former Maryland Gov. Martin O’Malley defended his record in Baltimore and Maryland on criminal justice. Asked about his crime policies in light of the death of Freddie Gray in Baltimore police custody, O’Malley said Sunday night that “we weren’t able to make our city immune from setbacks” but, “we were able to save a lot of lives.”