PARTISAN DIVISION IN ASSEMBLY? Before the annual season of lawmaking even begins in Annapolis on Wednesday, rising partisan tensions are threatening the chances that very much will get done, write Michael Dresser and Erin Cox for the Sun. Republican Gov. Larry Hogan, riding a wave a popularity, has warned the General Assembly’s Democrats that their maneuvering cannot force him to spend money he doesn’t want to. The Democrats, who profess not to be intimidated by Hogan’s poll numbers, promise to open the 90-day session by overriding most of the vetoes the governor issued last year. And they vow not only to promote their own initiatives, but to block the governor’s attempt to seize more control over the budget.

ENVIRONMENT ON FRONT-BURNER: As environmental advocates gear up for the upcoming Maryland General Assembly session, targeting climate change is going to be a top priority, Anamika Roy of the Daily Record reports. “This is going to be the year for climate and clean energy,” said Mike Tidwell, founder and executive director of the Chesapeake Climate Action Network.

MILLER ON GOVERNORS, PRIORITIES: In this video interview in the Sun, Senate President  Mike Miller says that vision and enthusiasm are two of the traits a governor needs. He offers some thoughts on successful politicians as well. With the start of the 2016 General Assembly session nearing, rising partisan tensions are threatening the chances that very much will get done.

MD SCHOOLS RANK 4th: Maryland public schools are the fourth best in the nation, according to a report released Thursday by a national education newspaper, according to the Cecil Whig. Education Week, which yearly ranks all 50 states and Washington, D.C., gave Maryland a “B” grade and a score of 82.7 out of 100 in its 2016 “Quality Counts” report. Massachusetts, the only state to earn a “B+” grade, held onto the top spot with a score of 86.8, followed by New Jersey (85.1) and Vermont (83.8).

ILLEGALS FEAR; REFUGEES GET HELP: A 27-year-old Guatemalan has nightmares recalling the sound of immigration agents knocking on her door. A 40-year-old cancer survivor from El Salvador fears driving to the doctor. Unmarked vans parked near schools make parents skittish. A state of unease approaching panic has set in for Central Americans living in the country — and in Maryland — illegally after the Obama administration announced this month it is targeting recent border crossers under a stepped-up enforcement effort, Liz Bowie and John Fritze of the Sun report. 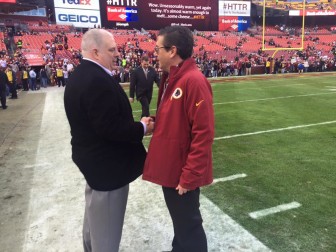 MAKE A BET, LOSE A BET: Count Maryland Gov. Larry Hogan in on the friendly wagers being made (and lost) with Wisconsin elected officials over Sunday’s playoff game, writes Ovetta Wiggins in the Post.  Hogan posted late Friday on his Facebook page that he has made a bet with Wisconsin Gov. Scott Walker that the Washington Redskins will triumph over the Green Bay Packers.

GOP FORUM HEATS UP: Candidate Amie Hoeber cruised through the first 90 minutes of Thursday night’s Republican forum for congressional hopefuls in Western Maryland’s 6th Congressional District, writes Bill Turque for the Post. But then the subject of abortion came up.

O’MALLEY ON THE MARGIN: Democratic presidential candidate Martin O’Malley will likely qualify for the next debate — but just barely, reports John Fritze for the Sun. Criteria announced by NBC News on Friday for its Jan. 17 Democratic debate in Charleston requires qualifying candidates to have at least 5 percent support in the early nominating states of Iowa, New Hampshire and South Carolina or nationally.

STATE PLANNING TO THE RESCUE: Snags, miscommunication and the proverbial red tape seem to be the culprit with several major Talbot County projects, according to the planning and zoning department. County planners and engineers hoped to overcome them by enlisting the help of Maryland Secretary of Planning David Craig when he came to town last November, Chris Polk of the Easton Star Democrat reports.

GRASSO CALLED BEFORE ETHICS BOARD: Arundel County Councilman John Grasso, who late last year asked to join the protracted legal battle between a liquor license applicant and the Anne Arundel County Board of License Commissioners, has been called before the county’s ethics commission to discuss his involvement in the case, Amanda Yeager of the Annapolis Capital writes.