TACKLING ED CONCERNS: A Maryland commission will review school construction policies in the state and offer recommendations to the General Assembly next year on ways to address the needs of the state’s 24 school districts. Senate President Mike Miller and House Speaker Michael Busch announced the formation of the commission on Friday, reports Ovetta Wiggins for the Post.

AIDING IMMIGRANT STUDENTS: Confronting a decade-long increase in the number of immigrants in Maryland schools, a state task force is looking at how to improve the education of these students, reports Liz Bowie in the Sun.  The task force, convened by the interim state school superintendent in May, is weighing several options, including expanding teacher training and creating a central repository of resources for teachers. State officials are also working with seven other states to come up with less punitive ways to hold schools accountable for achievement of newly arrived students.

COLLEGE-BUSINESS EFFORTS: When the Maryland General Assembly convenes in Annapolis next month, universities and community colleges will support ongoing efforts to develop the economy and make the state more business-friendly – such as by helping expand the workforce through continuing education, reports Daniel Leaderman in the Daily Record.

BAY BRIDGE’S FUTURE: The Bay Bridge will be safe for decades to come, but in the next quarter-century it will become a nightmare to drive, with miles-long backups nearly every day in the summer, Pamela Wood reports for the Sun. It’ll be costly, too. Just maintaining the bridge at gridlock standards will cost $3.35 billion over the next 50 years — without any improvement to capacity or traffic flow. Adding lanes would help, but that could cost as much as $6.85 billion. Those are among the findings of a study released this week by the Maryland Transportation Authority, the latest attempt to craft a long-term vision for the transportation link that state Sen. John C. Astle calls an “impossible problem.”

WIDE VARIANCE IN TESTING HOURS: In Queen Anne’s County, second graders take 28 hours of locally mandated tests each year, the highest in any Maryland school system. In Montgomery County, they take just four hours of county required assessments but that number climbs to 23 to 26 hours by the time students are in high school. In Carroll County, high school seniors take 32 hours of required tests — not counting the statewide assessments — the highest amount in the state, along with Cecil County. In Howard County high schools, seniors take no locally mandated assessments. What do these numbers mean? A new commission on testing would like to figure that out, Len Lazarick writes in MarylandReporter.com.

FOR UNIVERSAL VOTER REGISTRATION: The editorial board for the Frederick News Post comes out in favor of the recent proposal for universal voter registration in Maryland, writing, “if it is carefully conceived and managed it could be a secure and fair system and would bring many more eligible Maryland voters into the electoral process.”

JOB HIKES: After adding 3,600 jobs in November, according to the latest government figures released Friday, Maryland’s economy has added 46,100 private-sector jobs in the past year, Lorraine Mirabella writes for the Sun. The state’s job gains came across multiple industries as the national economy continued to strengthen.

LIQUOR COMPETITION STUDY: Comptroller Peter Franchot on Tuesday will release an economic impact study on the effect of introducing private sector competition into Montgomery County’s public liquor control system. Franchot has been a leading critic of the county’s public control regimen. Also in attendance will be Del. Bill Frick, who—in advance of the 2016 General Assembly session—has introduced a bill to authorize a public referendum on whether to allow private wholesalers and distributors to compete with the county’s Department of Liquor Control, Louis Peck reports for Bethesda Beat.

POT PARTNERSHIPS: Two of Somerset County’s largest institutions have announced separate partnerships with a startup seeking to grow medical marijuana in the county. The University of Maryland Eastern Shore has signed an agreement with Wellness Farms to create a research and grant program for medical cannabis studies.  Meanwhile, McCready Health, which operates the rural county’s lone hospital, has vowed to work with the fledgling firm on ways to improve health-care access, Jeremy Cox writes in the Salisbury Daily Times.

HOGAN AS BIZ ADVOCATE: Larry Hogan is the ideal governor to take on the difficult task of balancing the need for stronger economic growth in Maryland while at the same time slowing government spending, writes Barry Rascovar for MarylandReporter.com. Republican Hogan is a committed conservative who gained election by pledging to cut the fat out of state government and lower taxes (eventually). But Hogan also was elected because he is a pro-business executive intent on slashing business regulation and making Maryland more business-friendly.

HOGAN IN NEW HAMPSHIRE FOR CHRISTIE: Writes People magazine: N.J. Chris Christie hasn’t taken off his “Hogan Strong” wristband since his friend Maryland Gov. Larry Hogan was diagnosed with non-Hodgkins lymphoma in June, but now that Hogan is “100% cancer-free,” Christie cut off the band in a big way. Hogan joined the presidential hopeful on the campaign trail in New Hampshire on Sunday where he took a pair of scissors to Christie’s green wristband to mark his remission. Here’s the video on Christie’s Facebook page. (Photo below). 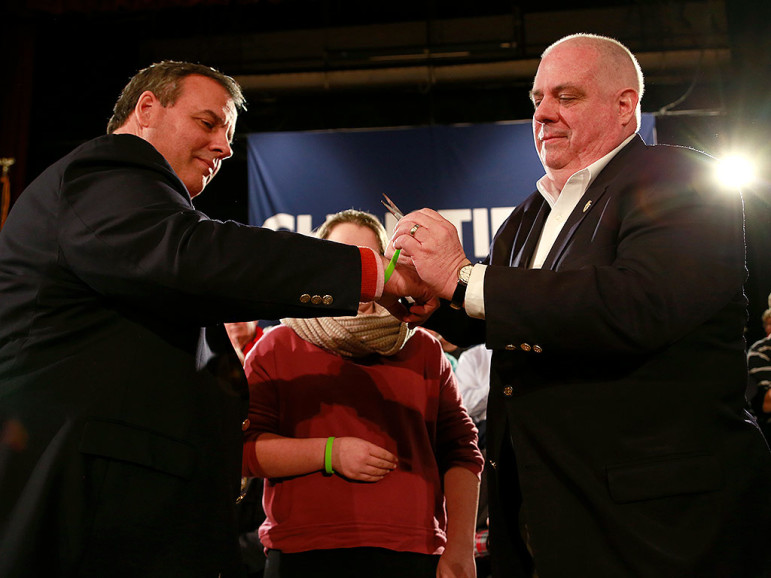 BALTIMORE COUNTY’S GRINCH: Sun columnist Dan Rodricks offers his “wish for the holiday season: If Del. Patrick McDonough manages to find out where poor people plan to live in Baltimore or Harford counties, he bakes them a cake, or maybe gingerbread cookies, or maybe a lasagna — anything that serves as a housewarming treat. My wish is that … McDonough becomes more gentle, and instead of criticizing efforts to better the lives of the poor, he will get involved in those efforts himself.”

JAWANDO & THE SHKRELI DONATION: Bill Turque of the Post follows up on an earlier story about Will Jawando, a Democratic candidate for Congress in Maryland’s 8th District, receiving campaign contributions from Martin Shkreli, the pharmaceutical executive and hedge fund manager charged Thursday with securities fraud.

TRACHTENBERG NOT IN: It first appeared Wednesday on a national politics blog and was soon spreading via Twitter. “Ex-Montgomery County Councilwoman Duchy Trachtenberg (D) launches primary run vs. Cong. John Delaney (D),” declared the Politics1.com blog, in a post later picked up by the Daily Kos. In fact, Louis Peck of Bethesda Beat writes, Trachtenberg did file a statement of candidacy late last week with the Federal Election Commission. But Trachtenberg—responding via email Friday to a question about her political status—said the filing “was made to comply with FEC regulations and nothing more.”

4TH & 8TH CONGRESSIONAL RACES: The candidates running for Maryland’s two open House seats have operated mostly out of view so far, building campaigns and raising money in the shadow of the state’s high-profile race for Senate. That’s about to change, writes John Fritze in the Sun. As they turn toward the post-holiday stretch, when more voters will begin tuning in, several top candidates in Maryland’s 4th and 8th Congressional Districts are preparing to ramp up their advertising and presence on the trail.

ON THE DEM DEBATE: In two columns, Len Lazarick of MarylandReporter.com and Richard Vatz write about Saturday’s Democratic candidates’ debate. Lazarick found the whole thing worthy of a snoozefest, and took the hint, leaving the Hillary Clinton dominated event at 10 p.m. Vatz stuck it out til the end and found the candidates adept at attacking each other and painting the Republican Party as the party of Donald Trump.

ANTI-DIXON AD: Luke Broadwater of the Sun reports that a political action committee called “Clean Slate Baltimore” has created a negative Sheila Dixon advertisement to run on Facebook during the holiday season. The ad focuses on the former mayor’s embezzlement conviction for stealing gift cards while she was mayor of Baltimore. It depicts her as the Grinch, and encourages viewers to “remember” her crime. The ad tops the article.

GROUPS HOPE TO DENY APPT: Two Maryland women’s advocacy groups are calling for Woody Spong’s appointment to the Washington County Board of Commissioners to be denied in the wake of an inappropriate comment he allegedly made to a female elected official earlier this year, reports CJ Lovelace for the Hagerstown Herald Mail.

LIBIT TO HEAD JEWISH COUNCIL: The Baltimore Jewish Council named Howard Libit its next executive director, writes Marc Shapiro in the Baltimore Jewish Times. Libit is currently the treasurer of the BJC and the public affairs chief and director of strategic planning and policy at the office of Mayor Stephanie Rawlings-Blake. Libit was formerly at Center Maryland and the Sun as an editor and reporter.