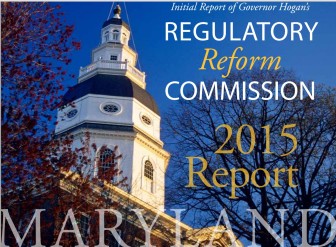 Gov. Larry Hogan’s Regulatory Reform Commission is recommending a massive overhaul of Maryland’s “convoluted” governmental structure along with a host of small and medium-size changes to streamline regulations and focus state employees on helping businesses and citizens.

“We have to fundamentally change the mindset of the state’s regulatory mission from one of glaring bureaucracy looking to punish and change it into a customer service base,” Hogan said as he touted the commission’s initial 30-page report at the Board of Public Works meeting Wednesday.

“We want to change the entire culture of state government to one of customer service … to change the mindset that you’re guilty until proven innocent,” the governor said.

Hogan admitted he and his staff “haven’t had the opportunity to review” all of the commission’s recommendation yet, but he clearly liked what he saw.

Hogan set up the commission in July to deal with one of the biggest complaints he heard on the campaign trail, “even more than taxes are too high” — that Maryland regulatory process is slow, cumbersome and unresponsive compared to Virginia’s.

So did the 11-member commission, getting an earful from more than 450 citizens who came to more than 24 hours of hearings at six locations across the state, according to the commission chairs. In addition, the commission website got more than 200 comments and suggestions.

The first part of the report quotes dozens of these witnesses by name, mainly government officials and business representatives. 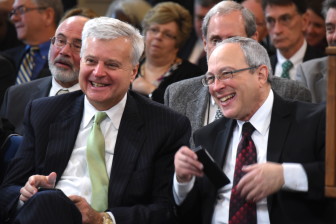 “Although the Commission had expectations of hearing almost exclusively specific regulatory recommendations, the fact is that the vast majority of citizen and business testimony dealt with the need to change the culture of state agencies and the way they interact with the public,” co-chairs James Soltesz and Abba David Poliakoff wrote in a letter to the governor. “It is to these concerns that our primary recommendations are focused.”

Their top recommendation is that Hogan “undertake a comprehensive review of Maryland’s state government structure, its regulatory environment, responsibilities, and functions with the goal of reorganizing state government to improve efficiency, accessibility, technology, customer service and adaptability to a rapidly changing business environment.”

Gov. Marvin Mandel reorganized Maryland government 45 years ago, and it needs a redo to bring the state into the 21st century, the report says.

The commission found agencies and departments with overlapping authority, creating duplicative review of plans and permits. The report recommends:

Customer service and the lack of it was a consistent theme.

“It is no secret that Maryland’s state government has long held a glaring bureaucratic, uncooperative reputation,” the report said. “This is a systemic, cultural disease that needs to be eliminated. Response times are inconsistent and often, it requires communication with an elected official to get the wheels turning.”

“Many business owners have protested that state regulators focus on finding reasons why something cannot be done, when in fact the emphasis should be on how (if possible) it may be legally accomplished.”

“This really is not a Republican or Democratic issue…We’re going to work very hard to change the attitude of state government,” Hogan said. He then lapsed into a familiar campaign mantra: “We’re here to get the government off of our backs and out of our pockets.”

“This is going to be a primary push for us.”

The commission also acknowledged some progress that 10 state departments had already made in implementing some of its recommendations.

While the commission took a broad overview of some problems and issues, it also delved into specific regulations that needed change.

The commission even got into regulations for vineyards and food trucks.

At vineyards, state regs said “wine and (hard) cheese could not be served to the public on the premises unless special equipment was installed for draining oils from grilled cheese – even though the cheese was not being grilled.”

State requirements for food vending trucks were even higher than those for restaurants and “unreasonably burdensome,” such as banning the sale of most food on state roads, yet permitting the sale of seafood and flowers.

Brief, intense special session kicks off with target on Bartlett’s back