Reps. Chris Van Hollen and John Delaney, right, were on opposite side of the House vote on refugee restrictions. Democrat Delaney voted with Republicans for the bill, as did a full quarter of House Democrats. Democrat Van Hollen was opposed. Photo by Karen Smith Murphy with Flickr Creative Commons License. 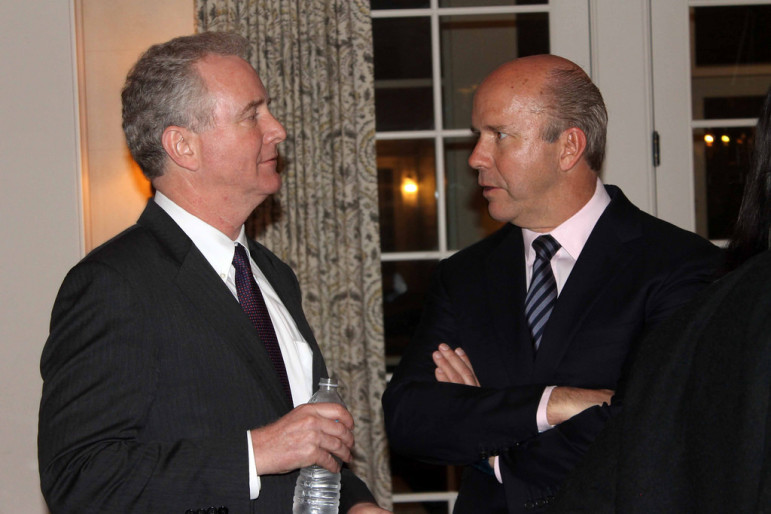 Reps. Chris Van Hollen, left, and John Delaney, were on opposite sides of the House vote on refugee restrictions. Democrat Delaney voted with Republicans for the bill, as did a full quarter of House Democrats. Democrat Van Hollen was opposed. Photo by Karen Smith Murphy with Flickr Creative Commons License.

WASHINGTON–Maryland Rep. John Delaney was among 47 Democrats to join with almost all House Republicans, including Rep. Andy Harris, Thursday in blocking further admissions of Syrian refugees into the United States pending tougher vetting.

The restrictions, in a bill called the American Security Against Foreign Enemies Act, passed on a 287-137 vote, despite a veto threat from President Barack Obama. Rep. Dutch Ruppersberger, D-Timonium, was recovering from surgery and was one of only eight representatives who did not vote.

The vote came in the wake of 129 people being killed in Paris in an attack for which the Islamic State of Iraq and Syria (ISIS) claimed responsibility. Obama has said he would take in 10,000 refugees fleeing war-torn Syria and surrounding regions.

“Regarding Syrian refugees, we should not have an arbitrary cap of 10,000, we should expedite the screening of women and children, and the screening process should be of the highest standard,” said Delaney, of Potomac, explaining his support for the bill.

Under the measure, refugees would have to undergo elaborate background investigations before entering the country, a process that likely would be lengthy.

Maryland Gov. Larry Hogan, a Republican, on Tuesday called on federal authorities to stop additional resettlements of refugees in Maryland “until the U.S. government can provide appropriate assurances that refugees from Syria pose no threat to public safety.”

“Today we voted to protect the American people and our national security,” he said in a statement. “Currently, this administration does not have a coherent plan for screening these incoming immigrants in a way that ensures they are not a threat to Americans.”

“This knee-jerk reaction that would punish mostly women, children, and seniors seeking safety from the brutality of ISIS is a betrayal of American values,” she said in a statement, adding that the comprehensive security process could take between 18 and 24 months.

Edwards said that ISIS was the enemy, not the refugees, and asserted that the United States could shelter refugees while taking steps to tighten its own security.

CORRECTION, 10/17, 10:18 a.m. Rep. Chris Van Hollen, D-Kensington, who opposed the bill and had criticized Hogan, said: “We can protect our security and uphold our values by carefully vetting refugees fleeing the horror of ISIS. ”

Speaking on Baltimore’s WBAL radio hours after the vote, Van Hollen said that the House action was a “political stampede.”

“While our screening process for refugees is the toughest of any, the reality is we have a visa entry program from Europe,” Van Hollen said. “This would do nothing to protect individuals who have been radicalized in those countries from coming in easily.”

Rep. Elijah Cummings, D-Baltimore, also opposed the legislation, saying in an earlier statement that “preserving the safety of Maryland’s residents and providing refuge for Syrians fleeing violence are not mutually exclusive; we can and must do both.”

Ruppersberger did not vote but said he opposed the bill.

He said in a statement that barring refugees “would not only do nothing to strengthen our national security, it would fuel the anti-American sentiment that strengthens ISIS.”

The bill will do nothing to keep American safe beyond measures already in place, said Rep. Steny Hoyer, D-Mechanicsville, the House minority whip.

“I believe it creates new requirements that will make it harder for our already-shorthanded security agencies to fulfill their critical missions,” he said.