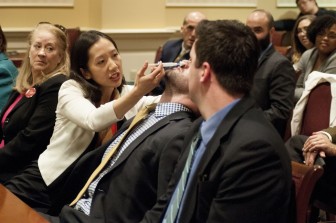 SAVING DRUG ADDICTS: Baltimore’s health commissioner didn’t just tell legislators Tuesday how to save a person who has overdosed on heroin. She showed them, reports Michael Dresser for the Sun. In an Annapolis committee room, Dr. Leana Wen leaned over her deputy, who slumped back in her chair as if unconscious. As lawmakers watched, Wen simulated the act of administering a dose of the anti-overdose drug naloxone by nose. She also showed how to use the form of the medicine that is injected into a muscle. “You have now been trained,” Wen told the delegates and senators.

PRISON POPULATION REDUCTION: A Maryland panel, created to scale back the state’s prison population, is considering changes to the probation and parole system, aimed at reducing the number of people who return to prison for technical violations, such as missing an appointment, writes Ovetta Wiggins for the Post.

REDISTRICTING REFORM: While her colleagues debated how they might come up with an independent nonpartisan redistricting commission — as the governor instructed them to do — the highest ranking legislator among them urged them to propose something lawmakers might actually pass: Rational standards for compact and contiguous congressional districts, writes Len Lazarick for MarylandReporter.com. “Don’t you want to come out of this with something?” asked Sen. Joan Carter Conway, a Baltimore Democrat who chairs the Senate committee that would likely handle any legislation the commission might recommend. “We want something that works.”

FARMLAND TRANSFER TAX REDUCTION: The farmland transfer tax owed to counties upon the sale of agricultural property must be reduced by a state surcharge of 25%, a divided Maryland high court has ruled. Steve Lash of the Daily Record writes that Montgomery County had argued in vain that the surcharge was in addition to — and not part of — the transfer-tax calculation and now owes the Phillips family, which had sold a family farm in Germantown, a tax refund of more than $41,000, the Court of Appeals ruled last week.

CHILD ID THEFT NOW A WORRY: In case you felt parenting wasn’t hard enough, officials say there’s something else to worry about: identity theft, which can destroy children’s credit scores before they’ve even learned to count. But Maryland hospitals and elected officials say there’s a solution – a proactive “freeze” on a child’s credit report that prevents any new credit accounts from being opened. Daniel Leaderman of the Daily Record writes about Attorney General Brian Frosh’s latest effort.

DEM POLL GOOD ON HOGAN: Josh Kurtz of Center Maryland writes that as if there was any doubt that Gov. Larry Hogan (R) is popular these days, a new poll conducted for a prominent Maryland Democrat, contains plenty of additional good news for the governor. This new poll delves into issues that the other polls didn’t. For one thing, the survey contains some more potentially bad news for Democrats, who are struggling to regain their footing after Hogan’s surprise victory last November.

ARUNDEL COUNCIL WANTS LOOSER POT RESTRICTIONS: Rema Rahman of the Annapolis Capital reports that the debate over how Anne Arundel County will implement Maryland’s medical cannabis law is far from over. County Council members are poised to support further easing restrictions on the growing, processing and dispensing of medicinal marijuana as they continue to consider dueling measures.

STEP BACKWARD ON THE BAY: The editorial board for the Sun addresses the Baltimore County Council’s likely repeal of the “rain tax.” Here’s how much most Baltimore County homeowners pay for stormwater remediation: $26 per year. Yet combined with the larger contributions made by businesses, the county is able to invest $16 million annually in projects to protect the Chesapeake Bay and its tributaries from the growing threat posed by runoff. If Baltimore County repeals the tax, it would put the seven-member council, including four Democrats, on an anti-environmental path beyond such GOP-led counties as Howard and Anne Arundel.

TRANSPARENCY IN HO CO SCHOOLS: In response to constituent complaints about the Howard County Public School System’s handling of public records requests, state Del. Warren Miller has drafted a bill intended to increase transparency and accountability in the process, Amanda Yeager reports in the Howard County Times. Miller’s legislation would “force a better control and release of information” from the school district to the public, according to the Republican, who represents western Howard County.

SAFETY LAGS  IN BALTIMORE CITY SCHOOLS: According to a CNS piece in MarylandReporter.com, a survey by the Centers for Disease Control has found that while schools are getting to be safer places to be, that isn’t the case for Baltimore City schools. CNS breaks down the survey into its various parts.

BAKER & LEGGETT’S LONG LONG FRIENDSHIP: Bill Turque and Arelis Hernandez profile the relationship between two county executives: Prince George’s Rushern Baker and Montgomery County’s Ike Leggett. It’s a close and long one, and one that started at Howard University, with Baker as a student and Leggett as assistant dean.

O’MALLEY IN THE MEDIA: Sean Walsh of the Sun gives a roundup of assessments of former Gov. Martin O’Malley’s recent media appearances that included Monday night’s spot on The Daily Show with Trevor Noah and his guitar-playing Tuesday on The View.

MOSBY TO MAKE MAYORAL ANNOUNCEMENT: Baltimore City Councilman Nick J. Mosby, who is considering a run for mayor, is planning an announcement event on Sunday, writes Luke Broadwater for the Sun. In an email to supporters sent out Tuesday, Mosby uses the tagline: “The best choice for a better Baltimore.” He is also husband to Marilyn Mosby, who is prosecuting police in the Freddie Gray case. 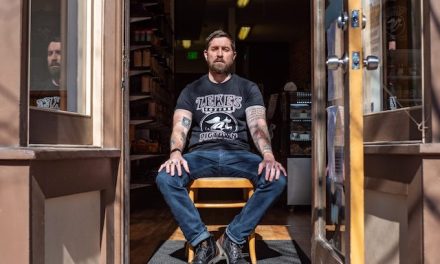