STATE TOPS IN LAW COST ASSESSMENTS: Maryland lawmakers may or may not propose wiser bills than those in other states, but they receive solid information about their costs, according to a study released last week. Michael Dresser of the Sun reports that the Center for Budget and Policy Priorities, a well-known Washington think tank, said Maryland is one of only five states to follow all of the “best practices” for informing lawmakers about the costs of the legislation they propose.

KNOWING AN ADDICT: Josh Hicks and Peyton Craighill of the Post report that nearly 3 in 10 Marylanders say they have a close friend or family member who was or is addicted to opioids such as heroin and prescription pain pills, according to a Washington Post-University of Maryland poll.

HOGAN’S POPULARITY: Columnist Barry Rascovar, in MarylandReporter.com, writes, “Make no mistake: Republican Gov. Larry Hogan Jr. is an anomaly in today’s ‘hate everything’ society: He’s a popular public official. Hogan tops out at 58% approval in a Goucher College poll and gets a 61% rating in the Washington Post poll. Good for him.”

DEMS BLOCK EARLY VOTING SITE SWITCH: Democrats on the state elections board voted Thursday to block a plan by Montgomery County Republicans to move one of the county’s nine early voting sites to a more GOP-friendly area, Michael Dresser of the Sun reports. The state board’s three Republicans voted for the plan, but it fell short of the 4-1 supermajority that was required to make the change. 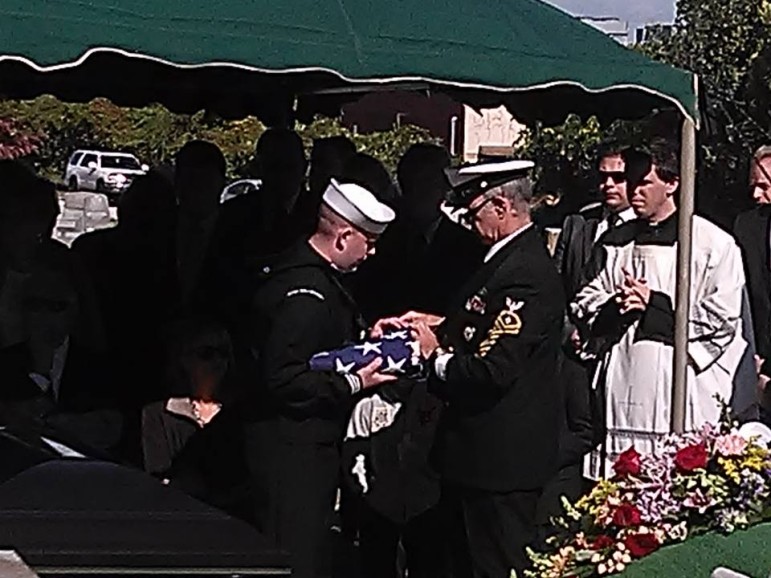 Former Delegate Sonny Minnick, a Navy veteran, was buried in Dundalk on Friday. Minnick was one of the founders of the Veterans Caucus in the Maryland General Assembly. Gov. Hogan ordered state flags flown at half mast in Minnick’s honor. Photo by Rebecca Weir Nelson

AA HONES IN ON POT SITES: The growing and processing of medical cannabis would mostly be relegated to Anne Arundel’s southern, rural section with dispensaries being allowed to operate in the county’s northern, more densely populated commercial area, Rema Rahman reports for the Annapolis Capital.

NO MORE REEFER MADNESS: The editorial board of the Daily Record urges local jurisdictions to stay calm and be smart when it comes to regulating where medical marijuana processing and dispensing facilities can locate.

REASSESSING SENTENCING: Over the past decade, Maryland has been sentencing even nonviolent offenders to longer and longer prison terms — at greater and greater public expense. Now, Annapolis lawmakers from across the political spectrum are taking a hard look at whether that makes sense, writes Michael Dresser for the Sun.

EXPUNGING RECORDS: Tom Hall and Jonna McKone of WYPR-FM report on the process of getting a police record and some convictions expunged to help former offenders get work. A new law went into effect on Oct. 1 that allows people to do just that.

NEW VOTING MACHINES IN HARFORD: For voters expecting the 2016 election to reflect an ever-more-digitized world, the new voting system debuting in Maryland next year may look surprisingly old-fashioned. Harford County’s Board of Elections is staying busy touring with the new equipment, which will first be used in the county for the upcoming presidential election, writes Bryna Zumer of the Aegis. The major change on Election Day will be a paper ballot, to be filled out by pen or pencil before being tabulated by machine. Early voters will have a slightly different process

HUNTERS DELIGHT: In a column for the Cumberland Times News, Michael Sawyers sings the praises of a new Maryland Department of Natural Resources app that allows him to do all the paper work to register a deer or turkey that he has bagged. 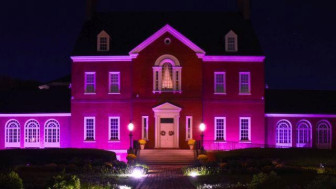 Government House was lit up in pink for Breast Cancer Awareness Month. Photo from WMDT-TV.

GOVERNMENT HOUSE IN THE PINK: The governor’s mansion in Annapolis was lit pink to raise awareness for breast cancer this weekend, according to WMAR-TV. Earlier in the month, Gov. Larry Hogan issued a proclamation announcing October as Breast Cancer Awareness Month.

CUMMINGS COULD LEAD IN SENATE RACE: Rep. Elijah E. Cummings would become the immediate front-runner if he entered the race to succeed retiring U.S. Sen. Barbara A. Mikulski, holding a double-digit lead over Democratic primary contenders Rep. Donna F. Edwards and Rep. Chris Van Hollen, according to a new Washington Post-University of Maryland poll.  Bill Turque and Scott Clement write the story for the Post.

EDWARDS AHEAD OF VAN HOLLEN: Rep. Donna Edwards leads fellow Democratic Rep. Chris Van Hollen in the race for U.S. Senate in Maryland, according to a new Washington Post-University of Maryland Poll released Friday. Dylan Reffe of CNS writes in the Easton Star Democrat that Edwards, of Fort Washington, leads Van Hollen, of Kensington, by 10 percentage points — 38% to 28% — the survey found.

MATTHEWS AHEAD IN FUND-RAISING: District 6 Rep. John Delaney, whose seat includes about one-third of Montgomery County, has so far remained neutral in the Democratic primary for the open seat in adjacent District 8. But his wife, April Delaney, has weighed in—contributing $2,700, the maximum allowed, to the campaign of Kathleen Matthews for the 8th District seat, Louis Peck of Bethesda Beat reports.

MILLER, HOYER TO HOST CLINTON: As former Gov. Martin O’Malley continues to struggle to gain traction in the presidential race, two of his state’s most prominent Democrats are co-hosting a fundraiser tonight to benefit their preferred candidate: Hillary Rodham Clinton. Former President Bill Clinton is billed as the “special guest” at the event, which will be held at the Chesapeake Beach home of state Senate President Mike Miller. U.S. House Minority Whip Steny  Hoyer is listed as the other host on the invitation, John Wagner of the Post is reporting.

O’MALLEY SAYS DEBATE BOOSTED FUND-RAISING: Presidential candidate Martin O’Malley said Friday that his debate performance was a “shot in the arm for fundraising” and said he is “absolutely” confident he will have resources to compete in early primary states despite a lackluster third quarter, John Fritze of the Sun reports.