DEMS URGE HOGAN TO PROTECT PLANNED PARENTHOOD: The national debate over Planned Parenthood funding spread to Maryland on Tuesday as Democratic lawmakers rallied in Baltimore and issued a letter urging Gov. Larry Hogan to commit to continued funding for the organization, Josh Hicks of the Post reports. The Baltimore demonstration was one of more than 200 “National Pink Out Day” events to take place at Planned Parenthood centers across the country in an effort to push back against hard-line conservatives who insist that Congress should defund the organization or else shut down the federal government. 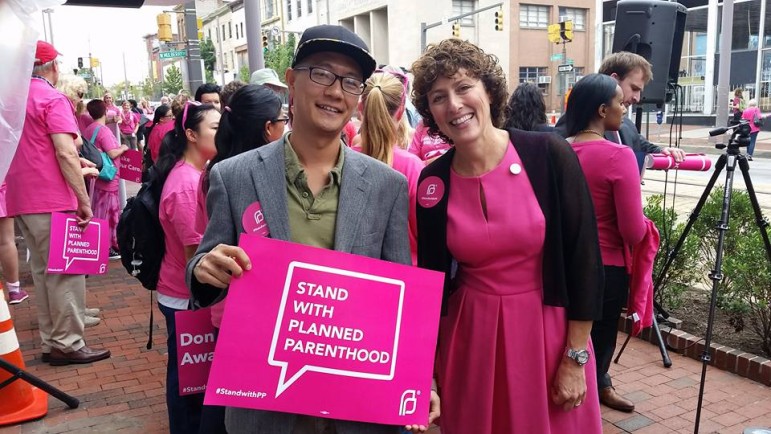 $15M FOR TRAILS: Michael Dresser of the Sun reports that bicycle and pedestrian trails will be the primary beneficiaries of $14.9 million in grants by the Maryland Department of Transportation, Gov. Larry Hogan announced Tuesday. The 63 grants will go to counties, municipalities and nonprofit groups for projects extending from Western Maryland to the Eastern Shore. The largest grants, totaling $7 million, will go to the C&O Canal Aqueduct at Williamsport in Washington County.

TAX REFUND EXCITEMENT: Fraser Smith and Karen Hosler, of the WYPR news team, discuss the reactions of Gov. Larry Hogan and Comptroller Peter Franchot to a Supreme Court decision that could lead to tax refunds for 55,000 Marylanders.

DIVORCE RULES EASED FOR SOME: When spouses in Maryland agree to split up and amicably hammer out a separation agreement, state law still makes them wait a year to file for divorce. That will change Thursday — at least for some couples — when a new law eliminates the waiting period for those without minor children who mutually consent to divorce and agree on a property split, the Sun’s Michael Dresser writes.

8 MD SCHOOLS EARN BLUE RIBBONS: Eight Maryland schools — six public and two parochial — were named 2015 National Blue Ribbon Schools on Tuesday by the U.S. Department of Education. The designation given to the most successful schools in the country went to schools in Anne Arundel, Baltimore, Harford, Frederick and Washington counties,  Liz Bowie reports in the Sun.

EBERLY ON GERRYMANDERING: Todd Eberly had been invited to speak before the redistricting commission last night. MarylandReporter.com runs his prepared remarks, in which he said in part that a critique of Maryland’s gerrymandered districts should not be viewed as an attack on the Democratic Party. “It’s not. It is an attack on a process that encourages both parties to substitute their needs and their agenda for those of the people and the voters.”

FROSH WEIGHS IN ON APPORTIONMENT: Maryland Attorney General Brian E. Frosh has joined 20 colleagues in urging the Supreme Court to uphold the practice of states apportioning their legislative districts based on total population and not just on those residents eligible to vote, Steve Lash reports in the Daily Record.

VAN HOLLEN CLAIMS STATE PROGRESSIVES: Rep. Chris Van Hollen said Tuesday that his campaign for Senate is capturing support from progressive Democrats — particularly those who vote in Maryland — despite his opponent’s effort to count the party’s liberal base as her own, writes John Fritze for the Sun.

DUTCH TO SEEK RE-ELECTION: U.S. Rep. Dutch Ruppersberger said Tuesday he will run for reelection rather than seek the Democratic nomination for Senate in Maryland, all but assuring his party will not have a Baltimore-based candidate in the race for Sen. Barbara Mikulski’s seat next year, John Fritze reports in the Sun.

MAYORS’ CONFERENCE: Nearly 40 mayors from across the country will gather in Baltimore this weekend for the U.S. Conference of Mayors leadership meeting to discuss areas the 2016 presidential candidates should prioritize, Yvonne Wenger of the Sun is reporting. Baltimore Mayor Stephanie Rawlings-Blake, president of the conference, will lead discussions that also will include economic development, community policing and the spike in homicides many cities saw over the summer.