Professor Toddy Eberly of St. Mary’s College of Maryland was scheduled to deliver this testimony to the Governor’s Redistricting Reform Commission Tuesday night. The commission invited the political science professor and commentator to make a presentation.

First, let me thank the members of the Commission for welcoming me here today. The work that you are doing is critically important and the decisions that you make will affect the quality of governance in the state of Maryland and perhaps inspire other states to take action that could ultimately improve the cause of fair and appropriate representation in every state.

Let me start by admitting that I do not have much patience for dyed-in-the-wool partisans – Democrat or Republican. Folks who think that their party is dedicated to goodness and light and that the opposition party is evil incarnate really need to realize that there is nothing inherently good or evil about the Democratic or Republican Party. Yet die hard Democrats are convinced that Republicans are out to control the country through any and all means and diehard Republicans are equally distrustful of Democrats.

In the end — the Democratic and Republican parties share the same goal — the acquisition of power and influence within government. And both parties will used whatever legal means are available to them to acquire that power.

In states dominated by Democrats, like Maryland and Illinois, Democrats use the redistricting process to game the system and boost party interests. Likewise, in states like Texas and North Carolina, Republicans do the same.

So a critique of Maryland’s gerrymandered districts should not be viewed as an attack on the Democratic Party. It’s not. It is an attack on a process that encourages both parties to substitute their needs and their agenda for those of the people and the voters.

It’s an attack on a process that subverts the very nature of representative government by allowing those in office to choose their voters instead of allowing voters to choose those who will serve in office.

The role of representation and the House of Representatives

I ask everyone to consider for a moment the issue of representation in America and the special role of the House of Representatives in our system of government.

All that was needed was a mix of competing branches and accountability — accountability through elections. Nowhere would this be more true than in the House of Representatives.

No branch of the federal government was more important than the House for it alone was tasked with representing the people – not the states as in the Senate and not the nation as with the President – but the people.

Many early critics believed that Congress would simply become an institution that boosted the powerful few to a position of authority over weaker masses.

But Madison demanded,” who are to be the electors of these men and women?” It won’t be the few or the powerful. It will be the masses. They will represent us, because they were elected by us.

And they will continue to be loyal to us and to represent us because we can fire them through elections.

Members of the House serve short terms in order to maximize the impact of accountability through elections. Of all the institutions of our national government, the House of Representatives was the one body most intended to embody democratic representation.

No reasonable person could look at the Congressional District maps in Texas, North Carolina, Illinois, Pennsylvania, or Maryland – especially the 2nd, 3rd, or 4th districts in Maryland – and conclude that they were drawn to best represent the interests of the people or to boost accountability through elections

As Americans we should be outraged that both parties manipulate something as sacred as representation in the manner that they do – not only in the House of Representatives, but in state legislatures as well.

Gerrymandering ultimately subverts accountability through elections. And without accountability, we have no reason to expect representation.

Today, there are approximately 370-380 safe seats in the House of Representatives. Out of 435 seats, competition exists in about 60. In the rest, the incumbent is safe and protected – and largely unaccountable to anyone other than the small number of partisans who vote in primaries.

In safe seats the majority party is so protected there is no reason to listen to the demands or wishes of minority party voters in the district.

This, coupled with closed primaries, results in far more ideological candidates and representatives. These incumbents are so safe in the general election that their only real fear is a challenge from within their own party in a primary election. And since most states, including Maryland, hold closed primaries these “safe” incumbents are more concerned about pleasing the most partisan and ideological members of their party base – because those are the folks who cut checks and the folks who vote in primaries.

As a result, we have seen the Republican party drift ever rightward and the Democrats ever leftward. A once crucial and vibrant political center is now gone from Congress. As ever more Americans reject the party label our politics are driven ever more by two disparate and intransigent parties. As explored in both of the books I’ve written on American politics, partisan gerrymandering and incumbent protection contribute to this.

A member of Maryland’s most recent redistricting commission defended the fact that so many of the state’s districts contains parts of the Baltimore area by explaining that it’s simply because so many of our incumbents live there. It’s not about representation. It’s about incumbent protection.

The process in the states

In 36 states, the state legislatures are ultimately responsible for the redistricting plan, subject to approval by the state governor – totaling about 340 seats.

A hand full of states, with 88 seats – Arizona, California, Hawaii, Idaho, Minnesota, New Jersey and Washington – have rejected partisan gerrymandering in favor of a non- partisan process. This is what I would I like to see in Maryland. I want to see more states follow the lead of Iowa and California and make this a nonpartisan issue.

If Maryland were to add its 8 seats to the 88 now decided in a nonpartisan manner it would not be sufficient to make the difference between a Democratic or a Republican majority in the U.S. House.  But it may inspire other states to act. There is much to be said for leading by example. 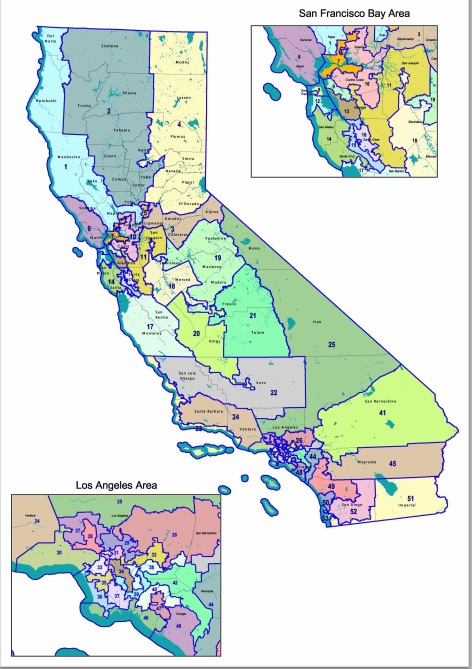 In California, the district maps are drawn by a citizen’s commission that convenes public hearings across the state. The commission consists of 5 Democrats, 5 Republicans and 4 Independent or Third Party members. For a map to be approved it must receive the support of 3 Democrats, 3 Republicans, and 3 of the Independent members. The Citizens’ Commission must abide by these standards:

Population Equality: Districts must comply with the U.S. Constitution’s requirement of “one person, one vote”

Federal Voting Rights Act: Districts must ensure an equal opportunity for minorities to elect a candidate of their choice

Geographic Contiguity: All areas within a district must be connected to each other, except for the special case of islands 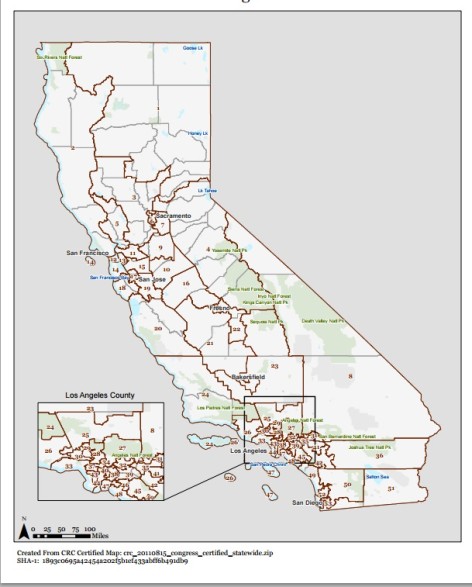 California’s congressional districts in 2011, after reform.

Geographic Integrity: Districts shall minimize the division of cities, counties, local neighborhoods and communities of interests to the extent possible, without violating previous criteria. A community of interest is a contiguous population which shares common social and economic interests that should be included within a single district for purposes of its effective and fair representation.

Geographic Compactness: To the extent practicable, and where this does not conflict with previous criteria, districts must not bypass nearby communities for more distant communities.

The results in California

In that time only one seat changed party hands (0.38%)

After California’s redistricting plan and new map went into effect

Of the 55 competitive seats nationally, California is home to 14…

20 come from other states with non-partisan approaches; 14 result from partisan gerrymandering that has made the incumbent party vulnerable.

And for all of the controversy and all of the pushback by California’s Democratic leaders, who feared that a fair process would simply mean the election of more Republicans, the process did nothing to boost the number of Republican held seats.

Democrats actually ended up with more seats AFTER the redistricting process.

But the seats do a better job of representing the people and communities and the seats are far more competitive – meaning that representatives must worry about all of the voters in their district no just about partisan voters in a primary.

I have included the before and after maps from California and what you see under the new approach is a clear effort to respect existing community boundaries.

California did the right thing. And the people of the state are better off and better represented.

The right thing to do

As a father, I’ve heard this argument many times. Except it usually goes like this “yea, but she started it,” “did not,” did too.” And it usually involves my 4- and 7-year-old daughters. It doesn’t work for them and it doesn’t work when it comes to restoring faith in politics.

I have little patience for folks who prefer excuses instead of reform, especially reform affecting something as important as representation in Congress. Redistricting reform is simply the right thing to do. And folks elected to represent the people of Maryland should not use the people of Texas, Pennsylvania or any other state as an excuse not to act.