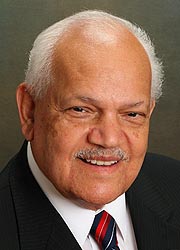 DEL. PROCTOR DIES: Del. James Proctor Jr., who represented Prince George’s County in the State House for more than two decades, died Sept. 10 at MedStar Washington Hospital Center. He was 79m the Washington Post reports. The cause of death was heart disease, said his wife, Susie Proctor. He had been in the hospital for the past two months, she said.

DEL. CAMPOS RESIGNS: Del. William A. Campos (D-Prince George’s) has resigned from the Maryland House of Delegates for personal reasons, nine months after he was sworn in to represent the state’s only majority Hispanic district, Arelis Hernandez reports in the Post.

MEDICAL POT FIRM EYES WA CO: Another medical-marijuana company is eyeing Washington County for a new operation that would bring more than 120 jobs and represent an $11.5 million investment in Hancock, C.J. Lovelace of the Hagerstown Herald Mail writes.

DELEGATE URGES CUT IN CITY AID: Pamela Wood of the Sun reports that Del. Pat McDonough said the state should cut $3 million from aid that goes to Baltimore City, which represents about 45% of the $6.4 million settlement the city will pay to Freddie Gray’s family. The city gets 45% of its budget from the state, he said.

ECONOMY AS HISPANIC ISSUE: When courting the Hispanic vote, politicians often put immigration at the front of their talking points. But Gov. Larry Hogan’s administration is taking a different approach. Anamika Roy of the Daily Record writes that the Hogan-Rutherford administration has been keen on addressing the economy as a Hispanic issue, particularly within the business community. On Tuesday, Hogan appointed CEOs, small business owners and those who have had roles in the U.S. Small Business Administration to the Governor’s Commission on Hispanic Affairs.

TAX CUTS & BALANCING ACTS: Don Fry of the GBC writes in Center Maryland that the discussion over whether Maryland should trim corporate and personal income taxes as a step toward improving the business climate and spurring economic growth and job creation is back on the table these days. Not everyone’s in favor of trimming such taxes. Some argue that it’s just another way to reward big corporations and won’t help Maryland residents. Others argue it would spur economic growth around the state and thus lift all boats.

FREDERICK LAWMAKERS TACKLE SCHOOL CONSTRUCTION: State lawmakers from Frederick County, concerned about having enough funding to build two needed elementary schools simultaneously, are gearing up to introduce legislation in Annapolis that could reduce the costs of building new schools, Jeremy Bauer-Wolf writes for the Frederick News-Post. At a joint meeting of the delegation and the Frederick County Board of Education Thursday, school board members spoke of how certain state laws had trickled down to the Frederick County Public Schools system.

DELANEY HOLDS VOLUNTEER EVENT: In honor of Pope Francis’ visit to the United States later this month, U.S. Rep. John Delaney has organized a volunteer service event in downtown Hagerstown on Sunday, writes Carlee Lammers for the Hagerstown Herald Mail. Delaney, D-Md., will volunteer at the Hagerstown Rescue Mission at 11 a.m., a news release from his office said.

O’MALLEY EARNS AN HONEST BUCK ON WALL ST: Is it possible to make an honest buck on Wall Street? If you’re decked out in an Under Armour shirt with an acoustic guitar in tow, apparently so. Quinn Kelly reports in the Sun that to highlight through-the-roof election spending, Independent Journal sent Martin O’Malley to Wall Street to see how the “everyman” presidential candidate would fare. Even selfies with passersby didn’t cause him to miss a beat of “This Land is Your Land.”

DUTCH SUPPORTS IRAN DEAL: John Fritze of the Sun writes that U.S. Rep.Dutch Ruppersberger announced Thursday he will support the nuclear agreement with Iran, arguing that the deal “removes Iran’s most dangerous and likely path to a nuclear weapon.”

OPPOSITION TO CASINO DEVELOPMENT: The proposal for a hotel and conference center at Maryland Live isn’t sitting well with some nearby Hanover residents who don’t want to see more development around the casino, Rema Rahman reports for the Annapolis Capital. More than 30 people turned out for a meeting Wednesday organized by County Council Vice Chairman Pete Smith in the Villages of Dorchester community.

SECRET WRITE-IN CAMPAIGN CONTROVERSY: Aaron Kraut of Bethesda Beat writes that the controversy over a secret write-in campaign in the tiny town of Chevy Chase has been simmering since the town’s election in May. It boiled over Wednesday night. During a Town Council session, Mayor Al Lang openly ignored calls from another council member to hear a presentation from the town’s Ethics Commission and Election Board on its recommendations for changes to the town’s election law.