HOGAN’S REDISTRICTING PLAN: Maryland’s redistricting commission fight has turned the usual politics upside down, with Gov. Larry Hogan breaking the Republican mold and backing a plan to let an independent panel redraw the lines — and Democrats vehemently fighting him, Anjali Shastry writes in the Washington Times.

HOGAN 95% CANCER FREE: A medical scan of Gov. Larry Hogan shows that he is 95% free of cancer, Michael Dresser reports for the Sun. Spokesman Doug Mayer said results from the scan performed after Hogan’s second round of chemotherapy showed the tumors found when he was diagnosed with non-Hodgkin’s lymphoma in June have mostly been destroyed. The results so far have been much more successful than doctors expected, Mayer said. 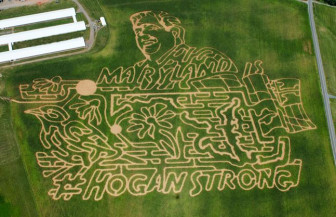 HOGAN A-MAZED: Gov. Larry Hogan will be enshrined for a time as part of a large corn maze that will raise money for the American Cancer Society, Bryan Sears writes for the Daily Record. The design — which sits on 35 acres and features more than 7 miles of trails — is part of Lawyer’s Farm 16th annual corn maze event, according to Taylor Huffman, manager of the family-owned farm.

MERCATUS RANKING REVISITED: UMBC Professor Roy T. Meyers, in MarylandReporter.com, addresses the Mercatus Center study that ranked Maryland only 37th best among the 50 states for its fiscal health. He writes that while there is good information within the study, some of it also should be questioned.

RED LINE DOCUMENTS: Advocates for a now-canceled transit system in Baltimore are accusing state transportation officials of not complying with open records laws and failing to provide documents they say will show how Gov. Larry Hogan and state Transportation Secretary Pete K. Rahn came to nix the Red Line, Bryan Sears reports for the Daily Record.

LAZARICK ON THE RADIO: MarylandReporter.com editor Len Lazarick will spend two hours today Wednesday on WCBM (680 AM and live streaming) from 10 a.m. to noon with guest host Del. Pat McDonough, filling in for Tom Marr. Topics include state government and politics and the Maryland media.

INSURANCE ENROLL RISES: More than 606,000 people have used Maryland’s health insurance marketplace to enroll in coverage for 2015, up nearly 39% from last year, Daniel Leaderman reports for the Daily Record.

PLEA DEAL IN CENTRAL COMMITTEE THEFT: An Elkton woman accused of stealing funds while serving as treasurer of the Cecil County Republican Central Committee is facing up to 10 years in prison after accepting a plea deal on Tuesday, Carl Hamilton of the Cecil Whig reports.

GROWING POULTRY INDUSTRY: The editorial board for the Easton Daily Times writes that the Delmarva Peninsula’s poultry industry is growing tremendously. Accomack County, Va., has a dozen applications pending for a total of 84 new poultry houses. In addition, it has fielded an inquiry from a producer about building 72 more. The peninsula needs to nurture the industry .

FREDERICK REPEALS ENGLISH ONLY: Frederick County government will no longer be required to conduct its official business in English, but many people on both sides of the language debate agree that won’t change much for local government, Kelsi Loos reports for the Frederick News Post.

MO CO TRIES TO OVERHAUL LIQUOR SYSTEM: Montgomery County is moving to unshackle its restaurants and retailers from an archaic system in which the local government distributes every bottle of wine and keg of beer sold in the Washington suburb. Michael Dresser reports for the Sun that, if approved by the General Assembly next year, the change could be the first step in the privatization of Montgomery’s unique county-run liquor store system — or a compromise that preserves it for decades to come.

FEWER IN PRISON: Far fewer people from Baltimore are going to prison each year than a decade ago, researchers reported Tuesday, driving down the numbers of people locked up in Maryland even as more criminals in the rest of the state are put behind bars. The Sun’s Ian Duncan reports that analysts from the Pew Charitable Trusts presented detailed data on Maryland’s sprawling corrections system Tuesday to a state panel charged with finding ways to reduce the number of people in prison and cut the rate at which criminals commit new offenses.

KEIFFER MITCHELL SR. DIES: Dr. Keiffer Mitchell Sr., a prominent Baltimore physician and a member of a nationally recognized family of civil rights activists, died Tuesday after a brief illness, his family said. He was 73. Mitchell, the son of pioneering NAACP leader Clarence Mitchell Jr. and activist Juanita Jackson Mitchell, was the first black student to enroll at Gwynns Falls Junior High School after the landmark 1954 Supreme Court decision that ended segregation, Colin Campbell reports in the Sun. His son, Keiffer Mitchell Jr., served in the House of Delegates and is now on Gov. Hogan’s staff.