Part 3 of a five-day investigative series on human trafficking in Maryland Capital News Service produced by student journalists and professional editors of the Philip Merrill College of Journalism at the University of Maryland College Park.

By Naomi Eide and Carly Morales

For a girl from Cameroon, the idea of America was seen only through a television screen. America was a dream where she could marry the Fresh Prince of Bel Air and be a part of the Beverly Hills 90210 clique.

“The way we see America in Africa, oh my God, it’s like heaven,” said Evelyn Chumbow, a survivor of domestic labor trafficking. “You would have never told me I would see a homeless person or I would be enslaved in America. I would never, ever [have] thought that.”

Labor trafficking can be found in sweatshops, on farms, in restaurants and nail salons, on construction crews and custodial staffs and in American households, according to the Maryland Human Trafficking Task Force. Labor trafficking victims are more commonly immigrants brought to the United States than Americans, according to “Hidden in Plain Sight,” a 2014 Urban Institute-Northeastern University study.

Victims are lured into modern-day slavery with false promises of a better education, work opportunities and higher wages, in search of the American dream, according to the  Urban Institute-Northeastern University study.

“Domestic work is mostly immigrant women,” said Tiffany Williams, former director of the Break the Chain campaign.  “So even those who are on visas are in this precarious immigration status because the employer holds the key to the visa.

“Those who are undocumented don’t come forward, don’t report, don’t challenge unless it’s really bad,” Williams said, “because they don’t want to lose their immigration status.”

The federal trafficking statute defines labor trafficking as obtaining a person for labor or services through the use of force, fraud or coercion to exploit them for involuntary servitude.

Because there is no template for what a labor trafficking case may look like, it often is difficult for the public to identify. And domestic labor trafficking in particular is out of sight, with the worker inside a household.

Victims do not always realize they have been trafficked. Victims’ relationships with their employers may start out as ordinary work situations and deteriorate into trafficking over time, Williams said. 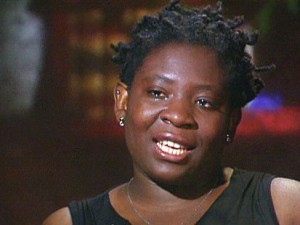 Evelyn Chumbow now travels the country to raise awareness of human trafficking as part of the Survivors of Slavery organization.

Chumbow was between 10 and 12 years old, according to court documents, when Theresa Mubang, an American citizen originally from Cameroon who is now 52, brought her to Silver Spring, after promising Chumbow’s family that she would receive a good education.

“But that’s not what happened when I got here,” said Chumbow, now 29.

According to federal court documents, Chumbow said Mubang forced her to cook, clean and care for her children without payment or schooling and routinely beat her. She’d strike Chumbow with the heel of a shoe or a metal broom, and she used a white plastic television cable to whip the girl’s hands or back until she bled, the documents say.

“Sometimes, when she was tired of beating me up, I had to stand up in her bedroom from 10 p.m. to 5 a.m. I stand up there really straight, no sleep,” Chumbow said in an interview.

Mubang, now in prison, did not respond to a letter requesting comment.

It was years before Chumbow escaped. Because of isolation from the outside world, Chumbow says she had lost a sense of time and did not know her exact age when she first left Mubang.

A stay with an aunt did not work out. Chumbow eventually found a church and a Catholic charity that alerted authorities. At 17, Chumbow said, she was placed in foster care.

The Trafficking Victims Protection Act, which Congress passed in 2000, allows law enforcement to investigate and prosecute human trafficking, including sex and labor trafficking. The law offers legal protections to victims.

“The laws have been, by and large, on the books a shorter period of time. State’s attorneys general and state prosecutors have tended to focus on sex alone because in the commonplace understanding of human trafficking, most people understand it as sex,” Vandenberg said. “It’s an added level of investigative sophistication to identify labor trafficking cases.”

Evidence can be difficult to assemble. While force and fraud can be found through physical signs and records, “coercion can take many subtle forms” and is harder to identify, according to a 2015 report from the National Domestic Worker Alliance.

Many cases are challenging to prove because they are rarely discovered while a victim is being trafficked, with few witnesses or physical evidence to corroborate the victim’s allegations, said Rachel Yasser, assistant U.S. attorney in Baltimore.

U.S. Immigration and Customs Enforcement is responsible for both arresting and deporting immigrants, but it also investigates instances of human trafficking.  Immigrant workers are afraid to cooperate with the agency because of its contradictory responsibilities and fear they might be deported, though they are victims, Williams said.

Many immigrant workers are more likely to cooperate with other investigators, such as those from the Department of Labor, she added.

In 2014, about 25% of the 135 potential human trafficking cases reported in Maryland to the National Human Trafficking Resource Center involved labor trafficking. Domestic servitude accounted for 11% of the 135.

Many of the workers recruited from other countries come with hopes like Chumbow’s.

“They come with low levels of education and have a very sincere interest to make improvements in their lives to support their families, and are coming with the hope of achieving the American Dream,” said Isela Bañuelos, one of the co-authors of the 2014 Urban Institute and Northeastern University report.

“Perpetrators of labor trafficking are using this to lure people in, making false promises,” she said.

Almost a third of victims in the U.S. come from Latin America, more than 25% come from Southeast Asia and almost 11% come from Africa, according to the “Hidden in Plain Sight” report.

Of 122 closed labor trafficking cases from four U.S. locations — the urban Northeast, the rural Northeast, the South and the West — studied since 2000 by researchers from the Urban Institute and Northeastern University, about 10% of victims were trafficked from the U.S. and Canada.

Traffickers use the threat of an illegal immigration status to coerce victims by threatening arrest and telling them no help is available to improve their situation, according to the research.

But, Bañuelos said, more than 70 percent of studied trafficked victims legally came to the U.S. on a visa.

Traffickers dehumanize their victims and force their labor by controlling almost every aspect of their lives, researchers say. They control their movements and outside communication, psychologically and physically abuse them and deny them food and medical care all while living in substandard conditions, according to “Hidden in Plain Sight.”

A federal jury in Maryland convicted Mubang in 2004 of holding a juvenile for a term of involuntary servitude and harboring a juvenile for financial gain. In 2005, she was sentenced to more than 17 years in prison. She is scheduled for release in 2021.

Meanwhile, Chumbow has earned U.S. citizenship and her associate degree and is finishing her bachelor’s degree in homeland security at University of Maryland, University College.

“I am an advocate now. I’m using my experience and I’m teaching other people,” she said. “Yes we are survivors, but also we’re above that. We’re also human beings. We are the abolishers of the modern day slavery, and we have to work together.”