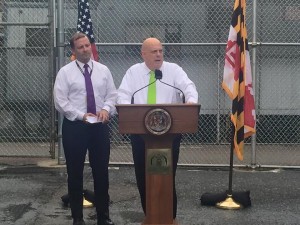 DETENTION CENTER TO SHUTTER: Justin Fenton and Luke Broadwater of the Sun reports that Gov. Larry Hogan said Thursday that he will immediately shut down the decrepit Baltimore City Detention Center, moving inmates to nearby facilities and ending a long-standing “black eye” for the state.The Republican governor said the Civil War-era jail — which is run by the state — could be torn down, and there are no plans to build a new facility. The article is topped by a video of Hogan’s announcement.

UNILATERAL DECISION: When Gov. Larry Hogan decided to close Baltimore’s long-troubled men’s jail, he didn’t call members of a state commission who had studied the issue, Justin Fenton and Luke Broadwater report in the Sun. He didn’t call the mayor of Baltimore. He just did it. “You don’t do this by committee,” said Stephen Moyer, Hogan’s secretary of public safety and correctional services. “You make a decisive action. Look at this place. It’s got to be closed.”

HOGAN BLASTS FEMA: Gov. Larry Hogan on Thursday lashed out at a Federal Emergency Management Agency decision to deny the state’s appeal for disaster aid after April’s rioting in Baltimore City, reports Rick Seltzer for the Baltimore Business Journal. “What could possibly be an emergency if that riot in Baltimore wasn’t an emergency?” Hogan said. “I just don’t understand.”

LAWMAKERS SEEK FEDERAL FUNDING FOR INNER CITIES: U.S. Rep. Elijah Cummings and Sen. Barbara Mikulski have introduced an emergency spending bill that would direct $1.2 billion in funding to address challenges faced by inner-city neighborhoods, an effort to reverse what they described as decades of disinvestment, reports John Fritze for the Sun.

ROCKVILLE STATUE CONTROVERSY: Rockville police officers are investigating the vandalism that occurred at the Confederate soldier monument that sits near the Red Brick Courthouse. Vandals spray painted “Black Lives Matter” at the base of the monument, writes Aline Barros for mymcmedia.com. It was reported on Monday morning. Major Michael England, of the Rockville City Police Department, said the city’s Criminal Investigations Unit is “actively investigating this incident, [but] at this point and time we still don’t have any viable suspect.”

MCINTOSH BACKS VAN HOLLEN: U.S. Rep. Chris Van Hollen scored a major endorsement Thursday in the Maryland Democratic Senate primary, winning the backing of state Del. Maggie McIntosh (D), reports Rachel Weiner for the Post. McIntosh, a longtime Baltimore politician who chairs the Appropriations Committee in the Maryland House of Delegates, called Van Hollen “one of the most effective leaders that we have in Maryland.”

VAN HOLLEN SUPPORTS IRAN DEAL: U.S. Rep. Chris Van Hollen said Thursday he will support President Barack Obama’s controversial nuclear agreement with Iran, a decision that could have implications for the Democrat’s campaign for Senate in Maryland. The decision puts Van Hollen, of Montgomery County, on the same page as House Democratic leader Nancy Pelosi and former Secretary of State and presidential candidate Hillary Clinton, but it has the potential to alienate some Jewish groups that ardently oppose the pending deal, writes John Fritze for the Sun. 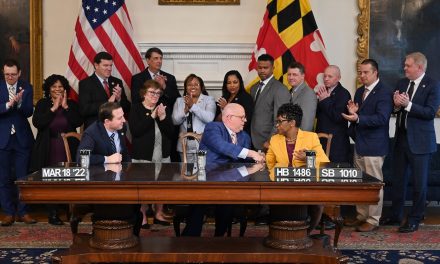