MARYLAND KEEPS AAA BOND RATING: MarylandReporter.com is reporting that the state of Maryland has continued to maintain its triple-A bond rating from all three New York rating agencies ahead of next week’s sale of $500 million in state bonds. The state treasurer’s office announce the ratings and posted the reports from Fitch, Moody’s and Standard & Poor’s on its website. “The citizens of Maryland will continue to save millions of taxpayer dollars as they benefit from lower interest rates warranted by these AAA ratings,” State Treasurer Nancy Kopp said in a statement.

SPENDING ON LOBBYISTS: Health care interests representing hospitals, providers and insurers continue to spend the most to influence Maryland legislators and state officials, paying out $4.5 million to lobby this past session, according to figures compiled by Common Cause from State Ethics Commission filings. MarylandReporter.com has the story.

BUS FARE HIKES HURT COMMUNITY GROUPS: When the Maryland Transit Administration implemented fare increases across Maryland for public transit last month, the $1 increase for tickets on MARC trains garnered most of the attention. But for some local community assistance groups, the raise in the cost of bus fare was the most damaging part of the hike, writes Heather Norris in the Catonsville Times. On June 25, the fare for one trip on a local bus, light rail, subway in the Baltimore area rose 10 cents, from $1.60 to $1.70. It doesn’t seem like much, but over the course of a week of commuting or multiple trips in a day, it adds up

LOWER NARCAN COSTS SOUGHT: U.S. Rep. Elijah Cummings is calling on Maryland leaders to negotiate lower prices for a heroin overdose antidote to ensure first responders have the drug at hand when they need it, according to an AP story in the Daily Record.

NESTING ISLANDS: Rachael Pacella of the Salisbury Daily Times writes about small islands that the state creates specifically to encourage endangered seabirds to nest. But once humans see that sandy beaches, their use of the islands can discourage nesting.

BODY ARMOR GRANTS: The Frederick County Sheriff’s Office received about $3,000 from a state grant to pay for body armor, a state agency announced Tuesday. Paige Jones of the Frederick News Post reports that it is one of 17 police agencies from 12 jurisdictions to receive funding, which totaled $49,077 in grants statewide. The amounts awarded ranged from $335 for the town of Sykesville in Carroll County to $15,152 for the Baltimore Police Department.

RASKIN’S COFFERS: State Sen. Jamie Raskin has raised more than a half-million dollars in his Democratic primary campaign for Maryland’s 8th Congressional District, his campaign announced Tuesday. Bill Turque of the Post writes that Raskin’s campaign said in a statement that he has raised $553,000 from more than 2,400 donors. Nearly 75% of Raskin’s donations came in amounts of $100 or less.

EDWARDS: TOUGHEN NATIONAL GUN LAWS: John Fritze of the Sun reports that federal gun control has emerged as an issue in Maryland’s Senate contest, with the two Democratic candidates pushing a series of proposals after last month’s massacre at a South Carolina church. U.S. Rep. Donna Edwards called for a sweeping overhaul of federal gun laws in an opinion piece in The Baltimore Sun. The Prince George’s County lawmaker says she supports a ban on assault weapons and a prohibition on domestic abusers purchasing firearms. This comes after her opponent, Rep. Chris Van Hollen, introduced a bill to toughen handgun licensing requirements and make it harder for people to buy firearms from private dealers and at gun shows.

URBAN SOLAR POWER TOUTED: The Obama administration announced a series of measures in Baltimore City on Tuesday intended to help low-income communities across the nation tap into solar power, and it significantly expanded its commitment to using renewable energy in federally subsidized housing, John Fritze reports for the Sun. Gathered behind a rowhome in East Baltimore, local and federal officials said they hope to encourage projects that allow multiple homes to draw off a single set of solar panels. And the White House tripled its goal of renewable energy produced in federal housing to 300 megawatts by 2020.

HO CO COUNCIL, EXEC AT ODDS: The Howard County Council voted to approve dozens of appointments and some high-profile bills Monday night, in its last legislative session before the council’s summer recess. But, reports Amanda Yeager in the Sun, perhaps even more significant were the votes they didn’t take. In an apparent rebuke to County Executive Allan Kittleman, a majority of the council voted to delay making decisions on two nominations, one of which has generated controversy over the past month. 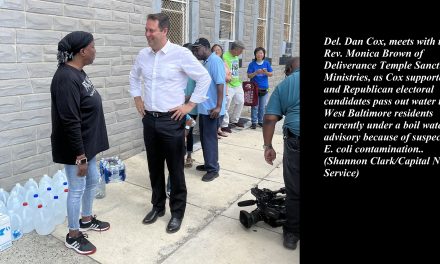