EXELON-PEPCO PURCHASE PROTESTED: Exelon Corp.’s proposed purchase of Pepco Holdings Inc. is drawing fire from several environmental and consumer groups. Twenty groups are sending a joint letter to the Maryland Public Service Commission opposing the deal, which would create a utility company with a $26 billion rate base and roughly 10 million customers. The groups announced their opposition in Baltimore City Thursday, criticizing the deal and characterizing it as bad for business, consumers and the environment, Rick Seltzer reports for the Baltimore Business Journal.

RED LINE SUIT: More than two dozen property owners have filed suit in Baltimore City Circuit Court seeking to stop the state from building the $2.9 billion Red Line transit project, reports Bryan Sears for the Daily Record. The 25 plaintiffs, who own 20 properties in the 300 block of North Fremont Avenue, say state Department of Transportation officials violated their due process rights and decimated their property values in redrawing the proposed alignment of the 14.1 mile project.

REPLACING KIRWAN: The search is on to find a replacement for “Mr. Maryland Higher Education,” Chancellor Brit Kirwan, whose remarkable 45-year career at the University of Maryland could end in the next six to nine months. It’s a national search, with a high-paid consulting firm culling the usual suspects within American academia. Columnist Barry Rascovar puts together local list of candidates.

ARCHIVES OPENS FOR FAMILY HISTORY: The Maryland State Archives is about more than dusty old books, writes Theresa Winslow for the Annapolis Capital. So, the staff is hosting a first-ever open house Saturday and showcasing — dusty old books. But the Family History and Genealogy Festival will feature a lot more than a behind-the-scenes glimpse some of the rare documents in the archives’ climate-controlled collection.

GOOD, MIDDLE SKILLS JOBS: Don Fry of Center Maryland writes about “middle skills” jobs that will be growing regionwide. These jobs aren’t diminished skills, he writes. “Basic skills in math and reading are prerequisites for the overwhelming majority of these jobs. More than half also require some technology and computer skills, as well as customer-service skills.”

INCOME TAX CASE GOES TO COURT: The U.S. Supreme Court is set to hear a case involving a Maryland couple who believe their out-of-state income should not be taxed by their state of residence, reports CNS’s Ashley Westerman for MarylandReporter.com. Brian and Karen Wynne of Howard County argue the income they earn in several other states through Maxim Healthcare Services Inc., a company Mr. Wynne partially owns, should not be taxed by Maryland if they pay the income taxes in those other states.

We expected to find more selfies from politicos on Facebook from the Orioles blow out of the Tigers Thursday night. Maybe we looked too early in the morning. Here we have, upper left, Del. Steve Schuh, Republican nominee for Anne Arundel County executive, and his daughter Brittany; upper right, County Council member Courtney Watson, Democratic nominee for Howard County executive, her father Ed Cochran, the former HoCo exec, and a son; bottom left, power lobbying couple Sean Malone and Lisa Harris Jones; and, it isn’t from the game, but here’s a selfie of Del. Ariana Kelly and former President Bill Clinton, pinch hitting for Hillary at an Anthony Brown fundraiser Tuesday night. Reportedly, no one was disappointed they got Bill instead of Hill.

HARRIS ON YOUNG RESEARCHERS: Rep. Andy Harris, a physician and former co-investigator on grants for the National Institutes of Health, wrote an op-ed in the New York Times on ways to prioritize young investigators at the NIH. The median age for first time recipients of R01 awards is 42 even though according to a study, the peak age of discovery is 35-39.  Harris wants to make sure young investigators are prioritized.

EXTENDED VACATION BAD IDEA: Hagerstown Rotarian David Hanlin, chair of its Literacy Task Force, writes in an op-ed in the Sun that Comptroller Peter Franchot’s campaign to extend summer vacation past Labor Day is misguided. “Unlike children in middle and higher income households, children in lower socio-economic households generally do not have access to enrichment activities during the summer. The result is that children lacking summer enrichment can experience learning loss of as much as 30 percent compared to those who do have enrichment-filled summers. These children need to return to school sooner rather than later because for many families school provides the most constructive enrichment to which they have access,” he writes.

POLICE BRUTALITY: Stories of alleged police brutality have drawn recent headlines both in Baltimore City and nationally. WYPR’s Fraser Smith and Donn Worgs of Towson University talk about the why the problem is so persistent and what the political establishment needs to do to rebuild trust between the citizenry and the police.

COLM DISHES ON DGA: Josh Kurtz of Center Maryland profiles Colm O’Comartun, the longtime lieutenant to Gov. Martin O’Malley who is completing his fourth year as executive director of the Democratic Governors Association, and picks his brain about the November elections that could make more statehouses and governor’s mansions Democratic. He also talks about O’Malley’s work inside the DGA as chief fund-raiser.

AA STATE’S ATTORNEY’S RACE: The contentious race for Anne Arundel state’s attorney was given a spotlight Wednesday at a crowded candidate forum in Arnold. All six candidates running for House of Delegates in District 33 came to the forum: Republican incumbents Cathy Vitale and Tony McConkey, both of Severna Park, and GOP nominee Sid Saab, as well as Democrats Kostas Alexakis, Tim Angelis and Henry Green. State Sen. Ed Reilly, who is running unopposed, also attended. Rema Rahman writes the story for the Annapolis Capital.

BROWN ON GUN LAWS: In an op-ed in the Sun, Lt. Gov. Anthony Brown says that if he is elected governor, he will continue to uphold the state’s gun laws passed by the General Assembly two sessions ago. “I was proud to be a part of the diverse coalition of police officers, teachers, gun violence prevention advocates, faith leaders and Maryland families who worked to pass the Firearm Safety Act.” He adds that his opponent in the race, Larry Hogan, is against the assault weapons ban, among other features of the new law. (The Sun will give Hogan space on its op-ed page in the next few weeks.)

DISTINGUISHING BROWN: Opinionmaker Fraser Smith, in a column for the Daily Record, writes that if Anthony Brown is to win his race for governor he needs to make it clear to voters that their is he is the compelling choice.

HO CO EXEC CANDIDATES ON MENTAL HEALTH ISSUES: A little more than a week after state-level candidates talked about mental health policy at a forum sponsored by the Howard County chapter of the National Alliance on Mental Illness, both Howard County executive candidates have released their own ideas for improving mental health services in Howard, Amanda Yeager reports in the Sun.

FORUMS & FRESH VIEWS: In Howard County, targeted forums are helping candidates get their message out and helping diverse groups of people hear them. With about a month to go until election day, there have so far been forums focusing on mental health, LGBTQ concerns and business issues, writes Amanda Yeager for the Sun. Last weekend and Monday, Howard Countians heard from candidates in two new settings, at forums hosted by the African American Coalition of Howard County and the Howard County chapter of the League of Women Voters. 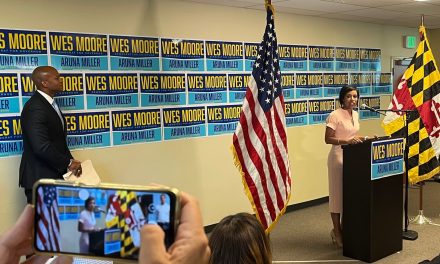