TASK FORCE METHOD: Kathleen Kennedy Townsend, the chairwoman of a task force appointed to make recommendations on how to improve retirement savings among private-sector employees, said her group will place an emphasis on what other countries are doing to solve their own problems since no states are significantly ahead of Maryland.

O’MALLEY TOUTS MINIMUM WAGE: Gov. Martin O’Malley on Thursday reunited with U.S. Labor Secretary Thomas Perez, a former member of the governor’s Cabinet, to make some burritos and talk up the importance of raising the minimum wage, reports John Wagner in the Post. The event at a Bethesda restaurant was the first time O’Malley had appeared in public with a member of the Obama administration since a dust-up last monthover how to handle thousands of unaccompanied migrant children coming across the U.S. border.

UBER & THE PUBLIC INTEREST: The editorial board for the Sun writes that the Maryland Public Service Commission’s decision this week to classify the ride-sharing service Uber as a common carrier is probably not the end of the story as to whether the company will continue its operations in Baltimore City and Annapolis. Uber has said it will appeal the decision, and the PSC itself ordered regulators to begin crafting new rules for for-hire companies in a tacit recognition of the changing nature of the industry. Ultimately, what needs to emerge is a compromise that allows consumers to continue to benefit from Uber’s innovative business model (and others that may come after it) but also protects the public’s interest.

FUNDING METRO FOR KEEPS: David Lubin of the Seventh State writes that Maryland needs to fund investment in Metro infrastructure maintenance and upgrades on a constant basis–not only when a crisis creates public demand to fix it. Maryland also needs to plan how it’s going to fund projects on a long-term basis. Beyond finding the money to build them, Maryland needs ongoing funding sources for the Purple Line and the (Baltimore) Red Line light rail projects.

CASINO, COMMUNITY & SALARY: In the 4th part of the series on gambling in Maryland, Idrees Ali and Jace Evans of the Capital News Service write about how one Baltimore City neighborhood — Westpost — which has felt ignored, with industry and jobs have moving out, people moving away and blocks crumbling for decade. Now the Horseshoe Casino is rising at the edge of Westport, and it, like other nearby neighborhoods, will share in millions of dollars every year for community improvements — a part of the state’s cut of gambling revenues. That’s good news, Westport residents say. But gambling, they caution, hasn’t saved other cities. These articles appear in MarylandReporter.com.

BENEFITS OF BIG TEN: As a past president of both the University of Maryland and Ohio State University, Brit Kirwan has seen how both the Atlantic Coast Conference and the Big Ten operate, reports Sarah Meehan for the Baltimore Business Journal. While the Big Ten has millions of dollars more to offer in media contracts and sports marketing opportunities that is attractive to a school like the University of Maryland, Kirwan said the benefits of joining the Big Ten go beyond athletics. “The distinguishing feature of the Big Ten is all 12 institutions have a very similar mission, for the most part they’re all major flagship public research universities,” he said.

TU MANSION TO BE SOLD: The Guilford mansion that cost a former Towson University president his job is expected to be sold to a private buyer next week, closing a controversial chapter in the college’s history. Officials are drawing up a contract to be submitted to the Maryland Board of Public Works for a vote Wednesday, authorizing the sale of the house for $1.05 million to an IT professional and his family, Carrie Wells reports for the Sun.

LETTER WRITING CAMPAIGN: Gov. Martin O’Malley is encouraging his supporters to launch an old-fashioned letter writing campaign to persuade Congress not to fast-track deportations of the thousands of unaccompanied minors who illegally crossed the U.S. border, reports Erin Cox for the Sun.

CASA ASKS HOGAN TO DENOUNCE SHERIFF: Immigration advocates this week called on GOP gubernatorial candidate Larry Hogan to denounce Frederick County Sheriff Chuck Jenkins for his links to a group that calls for completely sealing off the nation’s borders until immigration policies are reformed, reports Bethany Rodgers for the Frederick News Post.

CORPORATE GIVEAWAYS: Throughout his campaign to succeed his boss, Lt. Gov. Anthony Brown, has consistently criticized plans to cut Maryland’s corporate income tax as a “corporate giveaway.” Mark Newgent of Red Maryland writes that a tax cut is not a “giveaway,” it is government limiting itself from taking even more money from the corporation or individuals who earned it themselves.  And therein lies the rub. Brown, as part of the O’Malley-Brown administration, has been giving away your money (taxpayer funded subsidies, loans, and grants) to corporations for the last eight years.

FRICK ON SCHOOL CONSTRUCTION: Despite the incumbent advantage and the strength of the Democratic Party in Montgomery County, Del. Bill Frick, a Bethesda Democrat, says he isn’t taking anything for granted as he runs for re-election Nov. 4, writes Elizabeth Waibel in the Gazette. In the next session, school construction funding will be the No. 1 priority, with other quality-of-life issues, such as transportation, continuing to be important, Frick said.

WHO IS RUSSELL NEVERDON? Though the primary is over, the race is still on for Baltimore City State’s Attorney. WYPR’s Joel McCord and P. Kenneth Burns talk about the background and platform of an independent candidate, local defense attorney Russell Neverdon.

STEELE CONSIDERS MD RUN: Former Republican National Committee chairman Michael Steele, who is also a former Republican lieutenant governor, said Thursday that he is considering another run for office in Maryland in coming years, writes John Wagner in the Post.

WSSC HIKE QUESTIONED: Some Montgomery County residents on Wednesday questioned a proposal by the Washington Suburban Sanitary Commission to increase a maintenance fee and add an infrastructure fee for water and sewage services. The fee changes would be in addition to annual rate increases, which have been as high as 9% in recent years, writes Kevin James Shay in the Gazette.

BAKER HEADS NATIONAL COUNTY EXECS ORG: Prince George’s County Executive Rushern Baker has been elected to serve as the board president for the County Executives of America, reports Jamie Anfenson-Comeau for the Gazette. “I’m really excited about the next two years of heading up this organization,” Baker said. “This is a great way to promote Prince George’s County and raise our profile on a national stage.” 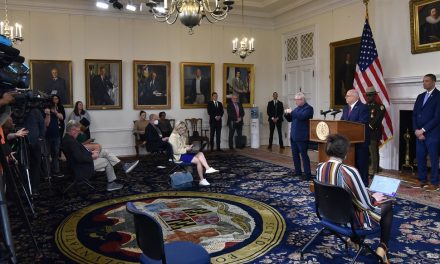