Workers on many local school construction projects would be paid at a higher rate under a prevailing wage bill approved Tuesday by the Maryland Senate.

The bill would increase overall construction costs by as much as 5%, estimates the state Department of Legislative Services.

Republican legislators were critical of SB 232, sponsored by Baltimore County Democrat Norman Stone. The bill passed 32-15 and requires that local governments pay the prevailing wage if the state has contributed 25% of funding or more to a school construction project.

Any other public work project valued at $500,000 or higher will be built by workers paid at prevailing wage if the state has subsidized 50% of the project, which is current state law.

The measure, along with prevailing wage requirements as a whole, is pro-union and meant to ensure construction workers are paid adequately. The state Commissioner of Labor and Industry determines the fair prevailing wage.

The bill would likely only affect 10 of Maryland’s 23 counties — those with school boards which accept roughly 50% from the state to fund school construction projects. The Department of Legislative Services estimated that overall construction costs would rise as much as 5%.

Kittleman, a member of the Task Force to Study the Applicability of the Maryland

Prevailing Wage Law, called it unfair that the local governments would need to scrape together money themselves to supplement the higher pay for the workers.

Kittleman’s task force has investigated the issue of prevailing wage laws for more than a year, but has yet to conclude whether projects associated with prevailing wages cost more in the long-term.

“I’ve been in construction management for many years,” Hershey said. “And with prevailing wage – union-rate jobs — they cost more up front.”

While legislators are considering raising the minimum wage for all workers to $10.10 an hour from $7.25, a common or unskilled construction laborer in Anne Arundel County would make $15.47 an hour according to prevailing wage state guidelines. In Frederick County, the same laborer might make $18.67 an hour, or $12.70 in Queen Anne’s County.

The bill supersedes local laws exempting certain projects from prevailing wages. In Montgomery County, for instance, the law states that school projects are exempted from prevailing wage requirements. But all counties would be subject to the stipulations of the bill, according to Sen. Thomas Mac Middleton, D-Charles County and chair of the prevailing wage task force.

All projects within the University System of Maryland and private nonprofit higher education institutions are also exempt from the bill.

Middleton called on the legislature to look past the costs on paper.

The House version of the bill, HB 727, passed 90-46 Monday, with some Democrats joining near unanimous opposition by Republicans in both chambers. 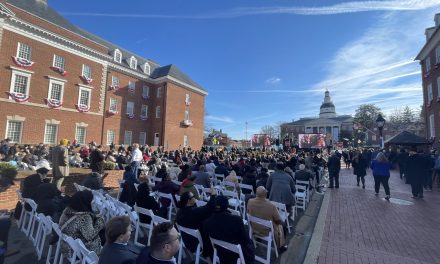 Bill restricts governors from shifting special funds to other programs