Senate Majority Leader Rob Garagiola confirmed Friday that he failed to disclose income as a lobbyist from 2001 to 2003, as reported by the Washington Post. But the Montgomery County Democrat also said that he didn’t report income from another law firm from 2003 to 2006.

Garagiola said he did not report income from the two employers because he misunderstood the instructions on a required financial disclosure form.

The accusations came a week after he voted to censure Sen. Ulysses Currie  for failing to disclose consulting income on required ethics forms, among other charges. The charge against Garagiola was raised by an opponent in his campaign for Congress in the 6th Congressional District, an accusation he called “just smear.”

Based on the instructions, Garagiola believed he was only required to disclose income if he was both the owner of a business and an employee.

“Both had to apply” or none applied, he said. “My logic back in 2001 could have easily been that because I was not a partner at [Greenberg Traurig], I didn’t have to report the income or my wife’s income.”

He said the absence of “and/or” or just “or” in the instructions led him to believe he was not required to disclose any income from the two firms.

Garagiola was employed as a lobbyist with Greenberg Traurig from 2001 to 2003 and as a corporate lawyer for Stein Sperling from 2003 to 2006.

He said the electronic forms changed in 2007 and the instructions were made more clear,  which is when he began to report income from Stein Sperling and his wife’s teaching income.

“So 2007 was the first year I listed my employment with Stein Sperling,” he said.

He said he also didn’t file the ethics forms as a candidate in 2001.

“I filed as a candidate for state Senate in 2001 and is probably why I didn’t file a report,” Garagiola said.

Sen. Christopher Shank, R-Washington, said the instructions on the ethics forms were unambiguous and that employment income must be disclosed on the ethics form — even if you don’t own a business. Shank has been in the legislature for 14 years.

“To me it has been pretty straight forward. I’ve never owned a business, but I’ve always interpreted that you list your places of employment,” Shank said. “If you have any questions about it, you err on the side of caution and ask somebody about it.”

State Ethics Commission Executive Director Michael Lord said Friday that it was possible to misinterpret that employment and business ownership must both apply in order to require disclosure — and that is why the form was changed.

Garagiola said the accusations of omitting income came from his rival in the 6th district Democratic primary, John Delaney. The Delaney campaign put out a press release Wednesday about the omission, saying, “Rob Garagiola blatantly lied to the voters about his professional experience.”

“The claim by my opponent is that I was hiding the fact that I did lobbying work for Greenberg Traurig by not filing them as my employer,” Garagiola said. “But the fact is I didn’t file employment for my wife as a teacher or employment for my other work [as a corporate lawyer].”

He said the accusations from the Delaney camp were “just smear.” 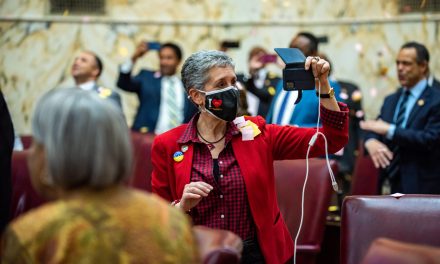