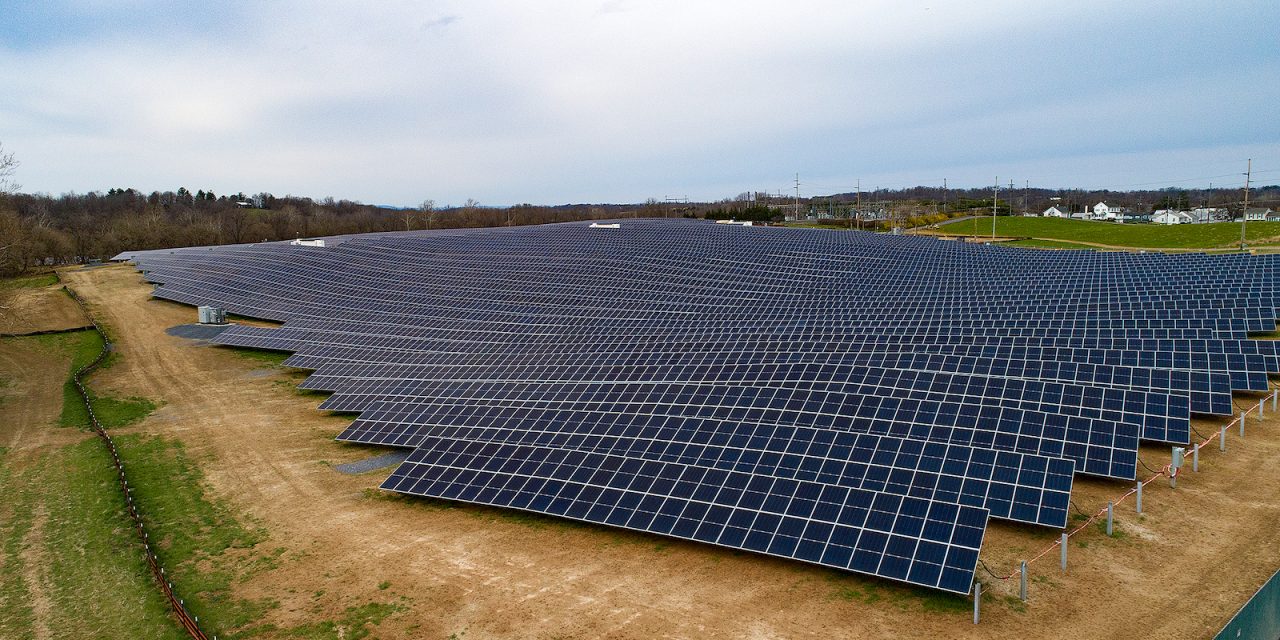 By Ad Crable and Timothy B. Wheeler

The rollout of solar and other renewable energy projects that Pennsylvania, Maryland and Virginia are counting on to end fossil-fuel reliance is caught up in a review bottleneck that is severely hampering the transition.

In those three Chesapeake Bay drainage states, 807 utility-scale, commercial rooftop, community solar and solar storage projects have been stuck in a growing regulatory traffic jam. Proposals have been waiting a year and often longer for PJM Interconnection, the organization that coordinates electricity transmission in 13 states and the District of Columbia, to complete the required studies that would move the projects forward.

Across PJM’s region, about 2,500 solar, solar storage and wind energy projects are awaiting a decision on whether they can connect to the electricity transmission network. Although that number will likely drop for a variety of financing and logistical reasons, the backlog has slowed the rollout of renewable projects, and delays can cause some projects to fail.

The slowdown comes at a time when each of the three major Bay watershed states, like many others, have adopted aggressive climate-change mitigation policies that rely on renewable energy. The combined solar projects waiting in line, if built, could power an estimated 5.6 million homes. At present, existing solar sites in the three states produce enough power for about 128,000 homes.

The role of PJM

PJM is responsible for ensuring that the transmission grid can handle any new electricity added to the mix. It has the authority to require new projects to build equipment and upgrade transmission systems so that the grid has enough power at any moment to keep the lights on in homes and businesses during any kind of weather. As part of that evaluation, PJM considers how the proposed power generation would affect the grid.

In the last four years, PJM has signed off on 725 renewable energy projects from a long line of applicants.

To help relieve the backup, PJM is planning to develop a streamlined review process intended to dramatically shorten the study period. But that overhaul could take two years.

In the meantime, PJM is delaying new applications for two years, and it’s proposing a two-tiered process to handle projects already in the pipeline. The projects deemed most “shovel ready” would be fast-tracked, according to PJM. That would total about 450 of the total 2,500 backlogged projects in all states.

Those less ready, for whatever reason, would have to wait until the new review process is in place, which may not be until late 2025. For them, a determination of whether they can hook into the electric grid may not come until 2027.

Despite the prospect of further delays for many projects, PJM said that Bay watershed states will be able to meet the renewable energy goals they have set to help address climate change.

“We have met with the states, including Pennsylvania, Maryland and Virginia, that have aggressive goals,” said Kenneth Seiler, PJM’s vice president of planning. “We are very well-positioned to facilitate the interconnection of renewable generation and help the states meet their goals out into the future.

“Had we not done anything, there would be limited opportunities for the states to achieve their goals. We are trying to be the voice of reason here.”

The states, though not happy about the current impediments, agree.

“Pausing the process and creating new rules to speed the more-ready projects in the queue we hope will break the logjam and reduce process congestion in the future,” said Jamar Thrasher, a spokesman for the Pennsylvania Energy Office. “We also hope that the pause will be shorter than anticipated.”

The suspension of new project reviews comes at a time when demand for solar energy is growing. Solar made up more than half of all new electricity generated in the United States during the first three quarters of 2021, according to the Solar Energy Industries Association and Wood Mackenzie, a global energy consultant. Most of the renewable projects in the PJM queue are solar.

Virginia in 2020 set a goal of achieving 100% clean electricity by 2050. It has 416 backlogged projects, enough to power 3.7 million homes, according to PJM. In 2021, the state ranked fourth in the nation in new solar installations. But since 2016, at least 225 solar projects have dropped out of the PJM waiting list.

“We need the ability for projects to come into the queue and get built,” said Harry Godfrey, executive director of Virginia Advanced Energy Economy, a business coalition seeking affordable clean energy. “Otherwise, that is a short– and long-term problem for Virginia in meeting its clean economy goals.”

Pennsylvania has committed to reducing greenhouse gas emissions 26% by 2025 and 80% by 2050. It has 443 solar projects awaiting approval in the PJM queue. That’s enough to power approximately 1.4 million homes.

Roots of the problem

PJM has long operated by managing grid access for a relatively small number of large and centrally located power plants. But the nonprofit corporation found itself overwhelmed by the surge of smaller renewable-energy projects, many located in rural areas away from population centers and needing a way to tap into the grid.

Based in Valley Forge, Pa., PJM is the largest of 10 transmission operators in the U.S. It oversees more than 84,000 miles of transmission lines and serves more than 65 million people in Maryland, Pennsylvania, Virginia, West Virginia, Delaware, New Jersey and Ohio, as well as parts of Kentucky, Tennessee, Illinois, Indiana, Michigan and North Carolina.

But its review staff of engineers and other specialists couldn’t keep up as new proposals were filed — with applications tripling in three years. PJM has been expanding staff and hiring consultants to aid with reviews.

PJM officials also say the backup is caused by many projects being filed on speculation, with little chance of actually being developed.

“We have found that to be an issue,” said PJM spokesman Jeff Shields. Solar developers may apply for 10 projects, hoping to find a buyer along the way, but only expect two or three to become reality, he said.

Indeed, many solar projects in the PJM queue end up being withdrawn because of issues with siting, financing or public opposition.

PJM hopes the new filing guidelines, with firmer controls on financing and ownership, “will go a long way for allowing us to focus on projects that are actually going to be built,” Seiler said.

While applauding the newer rules and the fast-tracking of the most viable projects, some representatives of the solar industry and environmental groups say that PJM should have anticipated the problem sooner and is not doing enough to expand the electrical transmission system and accommodate all of the new projects.

PJM’s response to the surge in solar and wind projects was hampered by staffing issues, said Cyrus Tashakkori, president of Open Road Renewables, a Texas-based developer of utility-scale solar. But he said that PJM also clung to an inefficient “first-come, first-served” review process that slowed the flow of projects.

“It did not sneak up on us,” said Tom Rutigliano of the Natural Resources Defense Council, an environmental group. “Other regional transmission operators have done better jobs at this.”

Gizelle Wray, senior director of regulatory affairs and general counsel for the Solar Energy Industries Association, noted that Midcontinent Independent System Operator, the regional transmission operator in the central part of the nation, reviews renewable energy projects in about one year.

There’s also grumbling over whether renewable energy projects should have to assume the burden of paying for needed transmission upgrades instead of spreading the costs among all customers who benefit, as some grid operators have done in other parts of the country.

In reply to criticism, Seiler said that because PJM is in such a heavily developed area, building new transmission lines has been difficult. And he said that, until the Biden administration made it a priority, there was a question of whether the push for renewable energy would continue. Wholesale changes would not have been supported by PJM members several years ago, he said.

Aiming for a reset

Backed-up PJM reviews aren’t the only obstacles to expanding solar energy in the region. Supply chain impacts from COVID, equipment price increases, siting disputes, resistance from utilities and the demise of the federal Build Back Better legislation in Congress, with its generous clean energy tax credits, are also affecting projects. State and local disputes over converting farmland and forests to solar fields are factors, too.

But everyone agrees that PJM’s lengthy reviews have been a major hurdle. Advanced Energy Economy, a nonprofit that advocates for clean and affordable energy, said the long wait at PJM with its uncertainty and connection costs are “often project killers.”

PJM’s plan to put a two-year hold on many projects that have already been waiting for years is likely to add to their problems.

“There are going to be a lot of projects, particularly late entrants to the [renewable energy] market in Virginia, that are going to be hurt by this,” said Open Road’s Tashakkori. He predicted that the Federal Energy Regulatory Commission’s expected approval of the PJM plan could be challenged in court.

Yet Tashakkori said he believed that PJM’s plan to fast-track some projects while holding up others is “the best combination of bad options, given the underlying problem,” which is the grid’s lack of capacity to handle all of the proposed projects.

Rapidly expanding renewable energy in the region, he said, will require an interstate or federal investment to proactively upgrade the transmission network — a kind of “front-loading” that a few states have undertaken.

For now, everyone seems relieved something is being done to relieve the backup.

“It sounds bad,” said Mike Tidwell, executive director of Chesapeake Climate Action Network, a nonprofit group advocating for increased renewable energy in Maryland, Virginia and the District. But if PJM’s pause leads to a truly streamlined review process, he added, “it could actually be positive for solar.”