Blog: Laughs below the belt at MACo 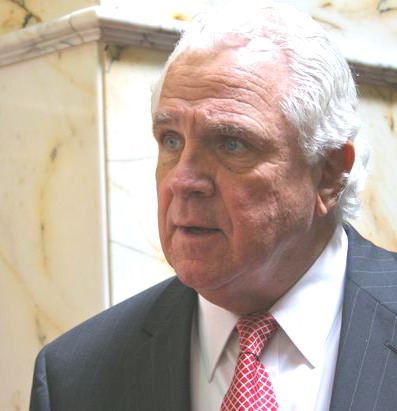 Blog: Laughs below the belt at MACo

Starting a speech with a joke is a good way to soften up the crowd. That’s especially true when you’re delivering bad news, as Speaker Mike Busch and Senate President Mike Miller were doing to local officials at the Maryland Association of Counties meeting Friday.

Busch led off his remarks with an endearing story about his recent colonoscopy, a procedure he had deliberately put off until two days after the election.

Turns out the doctor looking up the speaker’s lower intestine was a Republican who chatted him up about all the seats the GOP had won, telling Busch he “better take note.”

“Just go ahead and do the procedure,” said the Annapolis Democrat just re-elected to his seventh term.

Afterwards, all drugged up and groggy from the sedatives used to make colonoscopy bearable, Busch said to the doc, “Charlie, how’d I do?”

“Perfect, you’re in great shape. But I have to tell you the voters were right.”

“What do you mean the voters were right?” asked patient Busch.

“We did find parts of your head up there,” quipped the doc.

The moral of the story, Busch told the local officials: “You have to keep a sense of humor.”

After a long rant about how state employees have had to suffer more than county workers, and Maryland is better off than most states, Miller said he needed to “put a smile on things. I’ve been a little too somber.”

Miller, the eldest of 10 children, told a story from his youth when his father took the brood to the Prince George’s County fair while his mother worked a booth there.

One of the attractions advertised was “King Duncan, the world’s largest stud bull.” Admission was 25 cents.

Miller Sr. asked the man manning the booth, “How much money to bring these kids in to see King Duncan, the world’s largest stud bull?”

“Mister, all those kids yours?” the man responded, as Miller mimicked a rural drawl.

“Buddy, we want old Duncan to get a look at you.”

As the county leaders laughed and clapped – though not as loud as they roared at Busch’s tale – Miller Jr. told the MACo folks, “Well, I want to get a look at you too.”

Behind Miller on the MACo program was House Minority Leader Tony O’Donnell.

P.S. What does Miller think of those Tea-Party folks promising “no new taxes of any kind”?

“Those people are not worth the powder to blow them up with,” Miller said at MACo, pretty much out of nowhere.

General Assembly website taking weekend off; no word on redistricting