Robey, the former Howard County executive, is a mild-mannered ex-cop on the surface, but clearly a wild and crazy guy underneath. He will mark his eighth decade on the planet in 10 days by again participating in the Polar Bear Superplunge – dipping into the Chesapeake Bay once every hour for 24 hours to raise money for the Special Olympics.

“I’m probably the oldest superplunger down there,” Robey told his Senate colleagues Thursday.

Robey’s pledged to raise $10,000 again this year, and he’s already amassed $5,750, according to the website. Regular plungers need only take one dip in the bay and raise only $50 in this fundraiser sponsored by the Maryland State Police now in its 15th year.

Robey thanked Senate President Mike Miller for donating $10 an hour for every time he went into the bay last year, a total of $240.

Here’s the MarylandReporter.com video of Robey’s plunge last year in which he said the water was “a little warm.”

With this year’s cold snap, the state is getting the icebreakers ready, according to this Sun article.

Water temperatures in the upper bay are hovering around 33 degrees.

O’Malley gets the biggest party a day late, with thousands expected for his second inauguration as governor at noon. Forecast temperature a warm 40 degrees for the outdoor ceremony, with snow showers possible.

The governor observed the Martin Luther King Jr. holiday with a series of public service events. He stacked canned tomatoes at the Howard County Food Bank in Columbia (on shelves bought with federal stimulus dollars) and forecast some lofty rhetoric in his inaugural address. But due to the economy, “the whole celebration is a bit toned down,” he told reporters.

Bita Dayhoff, president of the Community Action Council in Howard County, said it was important for a governor to show his support for services like the food bank, which has seen increasing demand. In 2009, the food bank served 6,000 clients, Dayhoff said. In 2010, the number had more than doubled to 13,000. 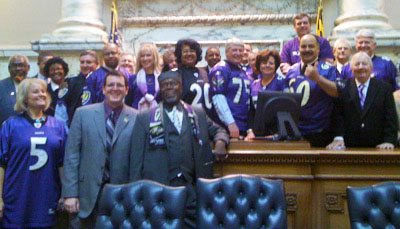 Analysis: From the back corner, a solid speech that was mostly true