This is the sixth and last part of a five-day investigative series on human trafficking in Maryland Capital News Service produced by student journalists and professional editors of the Philip Merrill College of Journalism at the University of Maryland College Park.

By Natalie Tomlin and Ana Mulero

Maria Sorto, originally from El Salvador, had just moved into an apartment complex in Langley Park when she was approached by a man with a business proposition: He wanted to operate a brothel out of her new home.

But others were willing. On Friday nights, after receiving their paychecks, men would swarm into the apartment buildings in search of drugs and prostitutes, she said.

Sorto moved to Hyattsville a couple months ago.

Rife with prostitution and human trafficking

“Throw a rock anywhere in Langley Park and you get a brothel,” said Christine White, a University of Maryland criminologist and chair of the research committee for the Prince George’s County Human Trafficking Task Force.

Even so, law enforcement officials have said they’ve had trouble catching traffickers there, citing the language barrier, elusive perpetrators and scared victims.

More than three-quarters of the Langley Park population of nearly 19,000 are Hispanic or Latino, and 70 percent are foreign-born residents, according to the most recent U.S. Census Bureau report. It’s a landing spot for Central American immigrants who are here illegally.

However, to residents of Langley Park, amid a vast sea of low-rise apartment buildings, there’s little that’s hidden about the problem.

The Rev. Roberto Cortés, pastor of St. Mark the Evangelist Catholic Church in Hyattsville, said church members and friends complain frequently about prostitution and sex trafficking in Langley Park and the surrounding area.  On occasion, he has heard from a victim too.

Cortés recalled that a woman from Langley Park walked into his church about a year ago and told him that she was forced to work as a prostitute in Langley Park and had stayed in the business to support her family.

“She was thrown into it and she was forced into it but then she needed the money,” he said. 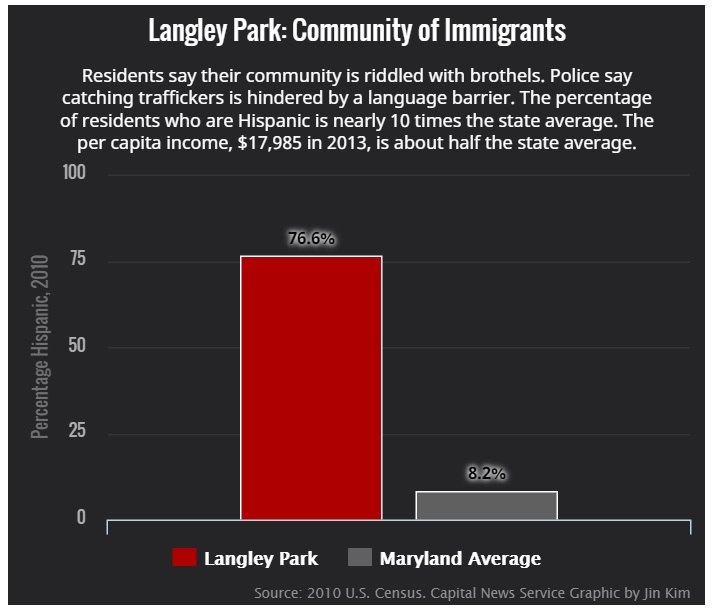 He said Langley Park often serves as a starting point for newcomers rather than a place to establish a family. Many residents remain quiet and tolerate the illegal activity within their neighborhoods because they view Langley Park as a temporary living situation, he said.

Alvarado Diaz was one of several residents interviewed by Capital News Service who said he was concerned about brothels in the apartment complexes. He said prostitution in the area is just one of many disruptive problems faced by the community. There are gangs, and the crime rate is high, he said.

Diaz has lived in Langley Park for 35 years and has spent 18 of those years working as a carpenter for the Maryland-National Capital Park and Planning Commission. He moved to Maryland from Santa Tecla, El Salvador, when he was 15 years old and three years later began living in what Diaz described as a “lovely” neighborhood of mostly elderly residents who genuinely cared about one another.

Today the community is younger, less educated and many residents are here illegally, he said. “They come here, they don’t have papers, nobody wants to hire them, so it’s easy money.”

Victims are reluctant to come forward, police and advocates say, because many are here illegally and they blame themselves for their situation.

The need for undocumented residents to earn a living, coupled with the demand for commercial sex, is what keeps the business thriving despite community-wide disapproval, police and advocates say.

Many residents said brothel managers manage to advertise while evading authorities through the use of business cards that traffickers pass around the Langley Park community.

Manuel Quinteros, a former Langley Park resident and Sorto’s son, said he has seen brothels come and go in his former apartment building. He said he was once given a strange business card, which he suspected was a covert advertisement for sex.

“I got [handed] a card here in Langley Park and they said, ‘If you want a delivery, the girls will do it,’” said Quinteros. “This phone number appears as something false…it’s like a restaurant but it’s not. It is something else. It’s a cover.”

Quinteros said many pimps have stopped passing out business cards because authorities have caught on to this method. Others recounted how men knock on the windows of residences and offer sexual services from women.

“These pimps don’t stay in the same locations with the girls,” she said. “They move around. If a repeat customer wants to come back to that girl, he has to search around.”

Getting the cooperation of victims is difficult, because many don’t speak English and some are in the United States illegally.  When victims are willing to testify against their traffickers, extensive resources are needed to help guide them through the prosecution, said Donnell Turner, a deputy state’s attorney for Prince George’s County.

Ball: Howard County will lift some restrictions on retail establishments and religious services