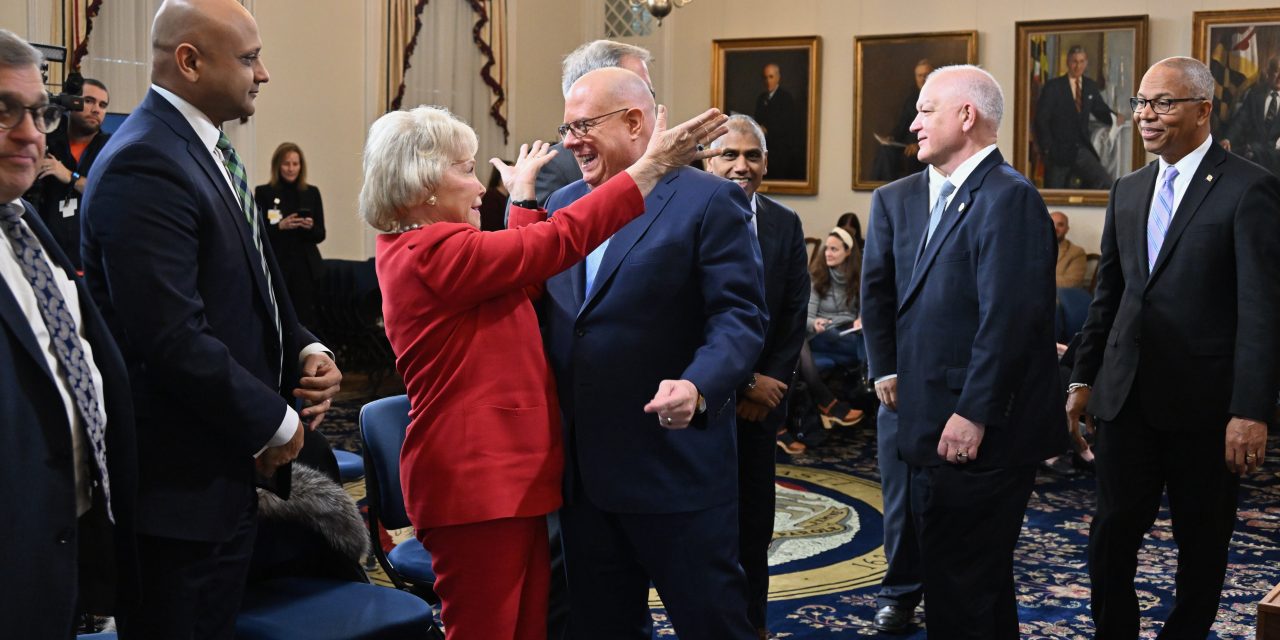 At the close of his budget press conference, Gov. Larry Hogan is about to get a hug from former state superintendent of schools Nancy Grasmick. Governor's office photo

HOGAN WARNS AGAINST OVER SPENDING: Outgoing Republican Gov. Larry Hogan on Thursday warned incoming leaders, a Democratic governor and super-majority in the General Assembly, to keep a tight lid on spending. Failure to do so, he told reporters at a State House news conference, would jeopardize what he called the “best fiscal position that the state has ever been in.” Josh Kurtz/Maryland Matters

MOSBY PRAISED BY CITY COUNCIL: Baltimore’s indicted State’s Attorney Marilyn Mosby was honored Thursday by her husband, City Council President Nick Mosby, and nine other members of the Council. They passed a resolution recognizing her service, despite the pending felony charges against her. Fern Shen/Baltimore Brew

TANEY BUST TO BE REMOVED FROM NATION’S CAPITOL: The House passed legislation Wednesday that calls for removing from the Capitol a bust of the U.S. Supreme Court justice who wrote the infamous 1857 Dred Scott decision that held that African-Americans were not citizens. The bust of Roger B. Taney, the nation’s fifth chief justice, sits inside the entrance to the Old Supreme Court Chamber in the U.S. Capitol. Kevin Freking/Associated Press in The Frederick News-Post

MONTGOMERY BECOMES FIRST IN REGION TO RECOMMEND MASKING AGAIN: A rise in COVID cases in Montgomery County has led the county government to recommend indoor masking and to require it in its own facilities. The county is the first Washington, D.C.-area locality to make such a recommendation since cases dropped dramatically over the course of 2022. Vaughn Cockayne/Washington Times

OPINION: ST. MARY’S COMMISSIONERS SHOULD ADVANCE CITIZEN PROPOSALS: A community organizer is disappointed the commissioners chose to act against a proposal to change voting for commissioners from at-large to by district. Brandon Russell/Maryland Matters

FINE LEVIED AGAINST BETTING APP FOR STARTING TOO EARLY: BetMGM, one of the new Maryland sports betting apps, agreed to pay a $146,000 fine for taking wagers before they were officially authorized to do so — the largest fine ever levied by gaming regulators. Pamela Wood/Baltimore Banner

MORE STATE OVERSIGHT OF SECURITY GUARDS CONSIDERED: After several deaths,  some officials across the state are beginning to pay closer attention to the private security industry, one that equips employees with many of the same tools police use but doesn’t have the same oversight as law enforcement. Alex Mann and Darcy Costello/Baltimore Sun

VACANT HOUSES CATCHING ON FIRE REPEATEDLY ARE STILL STANDING: Data from the Baltimore City Fire Department show fires are starting in vacant homes nearly every day, and an investigation showed most of those are still standing as privately-owned that haven’t met the standard for emergency demolition. Maxine Streicher/WBFF