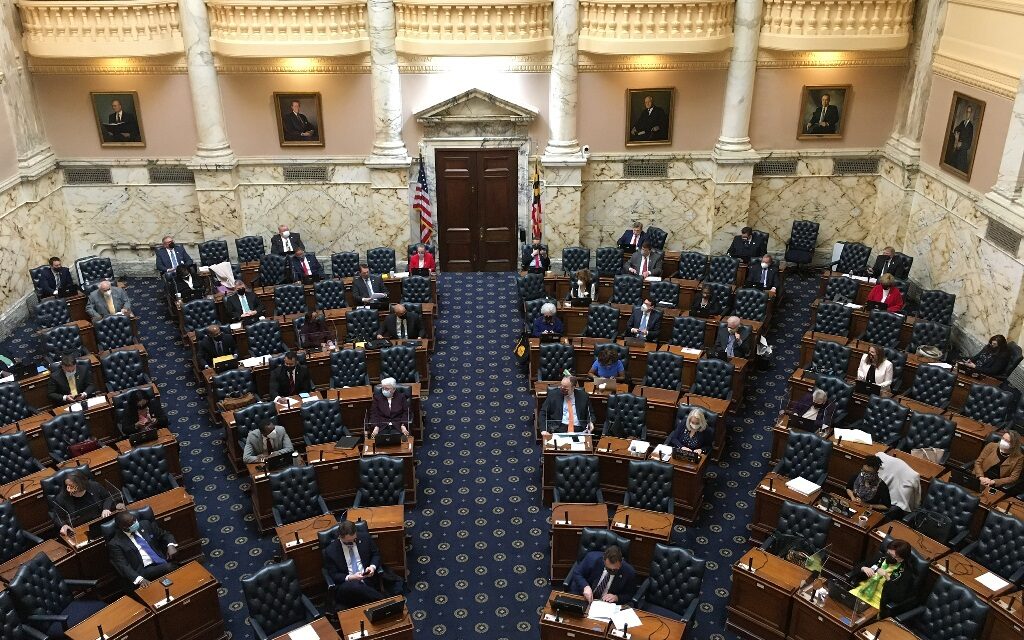 OPEN DELEGATE SEAT CAUSES DRAMA: An upcoming vacancy for a House of Delegates seat in Maryland’s 14th House of Delegates District has caused a new member of the county’s Democratic Central Committee to seek a rule change to a typical appointment process. The ensuing result appears to be a fight about how future vacancies should be filled. Steve Bohnel/Bethesda Beat

MD REPUBLICANS LOOK TO LOCAL LEVEL FOR RESURGENCE: On the Republican side, as Maryland Republicans prepare to gather at the Maryland Live! Casino Saturday to elect a new slate of leaders following a calamitous election cycle, one GOP consultant is pushing an idea to help build the party from the ground up. Josh Kurtz/Maryland Matters

HOGAN GIVES INTERVIEW ON THE WAY OUT: Outgoing Gov. Larry Hogan said his biggest regret was “not getting everyone on the same page when it comes to fighting crime in Baltimore” in an interview talking about how he decided to run, surviving cancer, and still no news on his potential presidential run next year. Jamie Costello/WMAR

‘CHARM CITY’ PHRASE REJECTED FROM TRADEMARK CONSIDERATION: The U.S. Patent and Trademark Office has initially rejected the Baltimore Ravens attempt to trademark the term “Charm City.” It is not entirely known how the trademark would have been used, but the filing was for things like calendars, books and trading cards. Chris Berinato/WBFF

NEW REPORT PREDICTS $5 MILLION IN SAVINGS TO RATE PAYERS WITH OFFSHORE WIND: A new report is laying out the economic and environmental benefits of expanding offshore wind energy production in Maryland — before a single wind turbine has been placed in the Atlantic off the coast of Ocean City. Josh Kurtz/Maryland Matters

BMORE COUNCILMAN RYAN DORSEY CALLS FOR REPEAL OF TERM LIMITS: Baltimore’s newly approved term limits for its mayor, comptroller and the City Council will not be effective until 2024, but a member of council is already calling for their repeal. Emily Opilo/Baltimore Sun

AGREEMENT REACHED IN FEDERAL CLASS ACTION SUIT ABOUT UNEMPLOYMENT BENEFITS: The state labor department will have to refund some unemployment claimants who were forced to repay benefits they were overpaid during the pandemic, according to a settlement agreement effective Wednesday. Brenda Wintrode/Baltimore Banner

LAWSUIT IN FIREFIGHTER DEATHS CASE: Relatives of firefighters who died battling a blaze at a vacant home earlier this year gathered at the site Wednesday with their attorneys, announcing they plan to sue the city and the state in hopes of preventing another tragedy. Justin Fenton and Penelope Blackwell/Baltimore Banner

HEALTH ADVOCATES GETTING READY FOR SESSION: Maryland health care advocates are lining up a list of priorities for the upcoming General Assembly session, which they hope will bring the state closer to their goal of ensuring that all residents have health insurance. Josh Kurtz/Maryland Matters

WESTERN MD DELEGATION DISCUSSES $50 MILLION ECONOMIC DEVELOPMENT FUND: Del. Jason Buckel (R-Allegany) said Thursday that the $50 million being distributed to Western Maryland by the state for business attraction must make an impact if the region ever hopes to see that type of investment again. The four-member District 1 legislative delegation discussed several current issues at a luncheon held at the Ali Ghan Shrine Club on Thursday. Greg Larry/Cumberland Times-News

COMMENTARY: GOP LT GOV CANDIDATE BLASTS DAN COX: The Republican nominee for lieutenant governor blasted her running mate Dan Cox after their failed election attempt  in the front page of Thursday’s Washington Post Metro section. The diatribe came after promising she would “never” say anything negative about him in public. (The Post story was the lead item in Thursday’s MarylandReporter.com State Roundup) Brian Griffith/The Duckpin

DEMOCRATS SAY JAN. 6 MEMORIES ARE PERSONAL: Nearly two years later, U.S. Sen. Ben Cardin is still processing the surreal scenes he saw inside the Capitol on Jan. 6, 2021, as a mob loyal to then-President Donald Trump forced its way in as lawmakers were finalizing the 2020 presidential election results. Jeff Barker/Baltimore Sun

ALSOBROOKS’ GLITTERING AFFAIR IN PG: The glittering waterside resort at National Harbor was the venue for an inaugural gala hosted by Prince George’s County Executive Angela Alsobrooks (D). Other county executives had parties after their inaugurations this week, but none was as packed or as fancy as Alsobrooks’ black-tie affair. William Ford and Josh Kurtz/Maryland Matters

UMD WON’T REQUIRE STANDARDIZED TESTS FOR ADMISSION: The University of Maryland will remain standardized test-optional through the fall 2025 admissions cycle, according to an email from undergraduate admissions director Shannon Gundy. Sasha Allen/The Diamondback