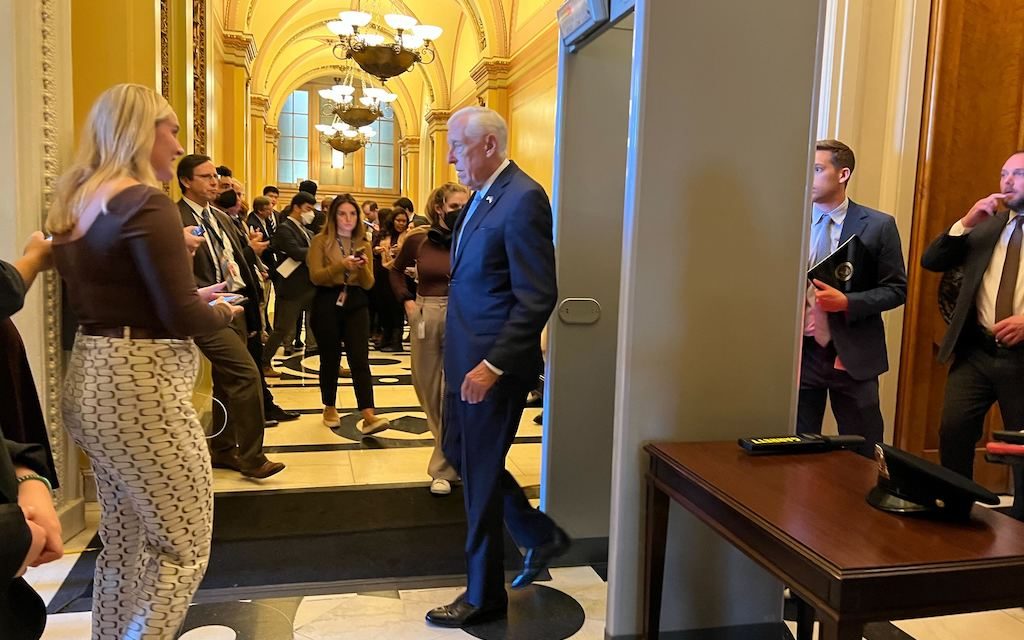 House Majority Leader Steny Hoyer, D-Maryland, leaves the United States Capitol Thursday after telling colleagues in a letter that he would leave leadership but remain in the House. (Ekaterina Pechenkina/Capital News Service)

Listen to this article
By COURTNEY COHN

WASHINGTON — House Majority Leader Steny Hoyer of Maryland, has decided to leave his position as the second-ranking Democrat – a post he has held in the minority and the majority since 2003 – but will remain in the House.

Hoyer for years was considered a likely successor to House Speaker Nancy Pelosi, D-California. But as she stepped away from her post Thursday, so too did Hoyer, part of a smoothly-engineered transition to younger party leadership.

In a letter to his fellow House Democrats on Thursday, Hoyer said: “Like my dear friend, John Lewis, I believe God’s work for us is to create that ‘beloved community’ for which John worked so consistently and courageously. I believe there is much for me still to do in pursuit of that endeavor. I believe that it is time for me, however, to continue my service in a different role.”

“Now is the time for a new generation of leaders, and I am proud to offer my strong endorsement to Hakeem Jeffries for Democratic Leader,” said Hoyer, who is 83 years old.

Hakeem Jeffries has represented New York’s 8th District since 2013. He serves on the Budget Committee and Judiciary Committee.

He is 52 years old, much younger than the current leadership.

Rep. Bennie Thompson, D-Mississippi, who is the chairman of the Jan. 6 Select Committee, has worked with Hoyer in the House for almost 30 years and has valued his leadership.

He told Capital News Service that he’s relieved that there isn’t a “dog fight” as to who will lead the party next and that Democrats are making a smooth transition to younger members in leadership.

“I’m glad that we leave with an understanding that it’s time to pass the torch,” Thompson said.

Democrats lost control of the House in this election, so Jeffries would be serving as a minority leader – and the first Black party leader in American history – for the next two years. However, Hoyer thinks that Jeffries will be speaker after the next election cycle.

“He is a skilled and capable leader who will help us win back the majority in 2024 as we strive to continue delivering on our promises to the American people,” Hoyer said.

Hoyer will still continue his work in the House serving Maryland’s 5th District.

“I do intend to continue my service in Congress and return to the Appropriations Committee as a member to complete work in which I have been involved for many years, including my focus on education, health care, and investing in America’s productive manufacturing capacity to create more jobs and opportunities for our people,” Hoyer said in his letter.

He said he also thrives fighting for equality, especially focusing on voting rights and civil rights.

“I have been honored to serve alongside Nancy Pelosi, whose tenure as Speaker was both historic and extraordinarily productive,” Hoyer said.

Pelosi and Hoyer will still play a significant role in the House, even though they are no longer in leadership, according to Thompson.

“I know the next crop of leaders will weigh heavily on their experience and knowledge,” Thompson said.

Hoyer said he looks forward to providing his guidance to the next generation of Democratic leaders.

“I am honored to serve with you, and I look forward to what we will surely accomplish together in the years ahead,” Hoyer said.