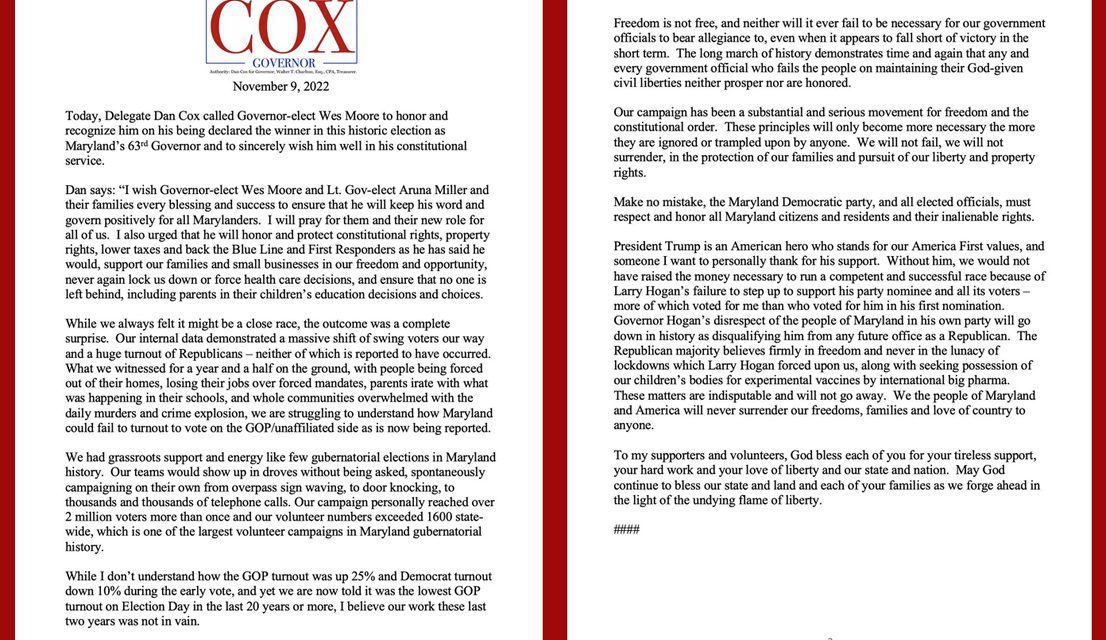 COX CONCEDES TO MOORE, TAKES A BIG SWIPE AT HOGAN: There has been concern that Dan Cox would not concede the gubernatorial election, should he lose, and would instead contest it despite the tally. The above letter, taken from Dan Cox's Facebook page shows that he has conceded. And, on the 2nd page, he is merciless with his invective against Gov. Larry Hogan while praising former President Donald Trump, who has yet to formally concede the presidential election to Joe Biden.

COX CONCEDES; STILL STUMPED BY MASSIVE LOSS: Republican gubernatorial candidate Dan Cox acknowledged on Wednesday that he is struggling to reconcile what he observed and felt on the campaign trail with the results reported by the state Board of Elections. Nonetheless, the Frederick County lawmaker phoned Gov.-elect Wes Moore (D) to offer congratulations and to wish him well as the state’s new leader. Bruce DePuyt/Maryland Matters.

ANALYSIS: 7 FACTORS FOR THE MOORE WIN: How did the best-selling author and former non-profit CEO propel himself to victory? Wes Moore himself called it “an improbable journey” during his election night speech. But there were seven factors that he called on to put him on top. Bruce DePuyt/Maryland Matters.

HISTORIC GOVERNANCE: Along with Wes Moore, who is the state’s first and the nation’s third Black governor, Maryland will see a series of other historic firsts after Democrats swept the top of the ticket Tuesday. They are the first immigrant and Asian American lieutenant governor in Aruna Miller, the first Black attorney general in Anthony Brown and, in Brooke Lierman, the first female comptroller and first woman directly elected to statewide office. Hannah Gaskill and Hayes Gardner/The Baltimore Sun.

PARROTT LEADS TRONE; NOW THE MAIL-IN BALLOT COUNT BEGINS: Maryland’s most anticipated congressional race, a rematch between Rep. David Trone (D) and Del. Neil C. Parrott (R), remains uncalled as of Wednesday afternoon, and it may be a while before results are known. Meagan Flynn/The Washington Post.

PITTMAN CONFIDENT OF OVERCOMING VOTE DEFICIT: Anne Arundel County Executive Steuart Pittman (D) is currently trailing his challenger, County Councilmember Jessica Haire (R), by almost 11,000 votes. But Pittman on Wednesday was expressing confidence that when all the ballots are counted — especially the 45,000 or more mail-in ballots, which will begin to be tabulated on Thursday — he’ll win. Josh Kurtz/Maryland Matters.

KITTLEMAN CONCEDES TO INCUMBENT BALL: Republican Allan Kittleman issued a statement Wednesday afternoon conceding defeat in the race for Howard County executive to incumbent Calvin Ball, a Democrat. “In reviewing the election results that have been reported, it is clear that we will not be able to overcome our deficit when remaining mail-in ballots are counted,” Kittleman stated in an email. Sherry Greenfield/Baltimore Sun Media.

1 DEAD, 4 POSSIBLE ODs POSSIBLE AT STATE RUN JAIL: A 21-year-old man died at Baltimore’s state-run jail after he was found unresponsive in his cell on Monday. Then on Tuesday morning, four detainees at the jail suffered “possible overdoses” at the Baltimore Central Booking and Intake Center, according to the Maryland Department of Public Safety and Correctional Services, which runs the facility. Ben Conrack/The Baltimore Banner. 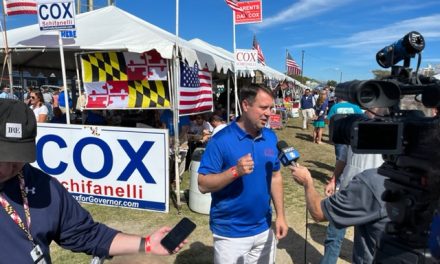