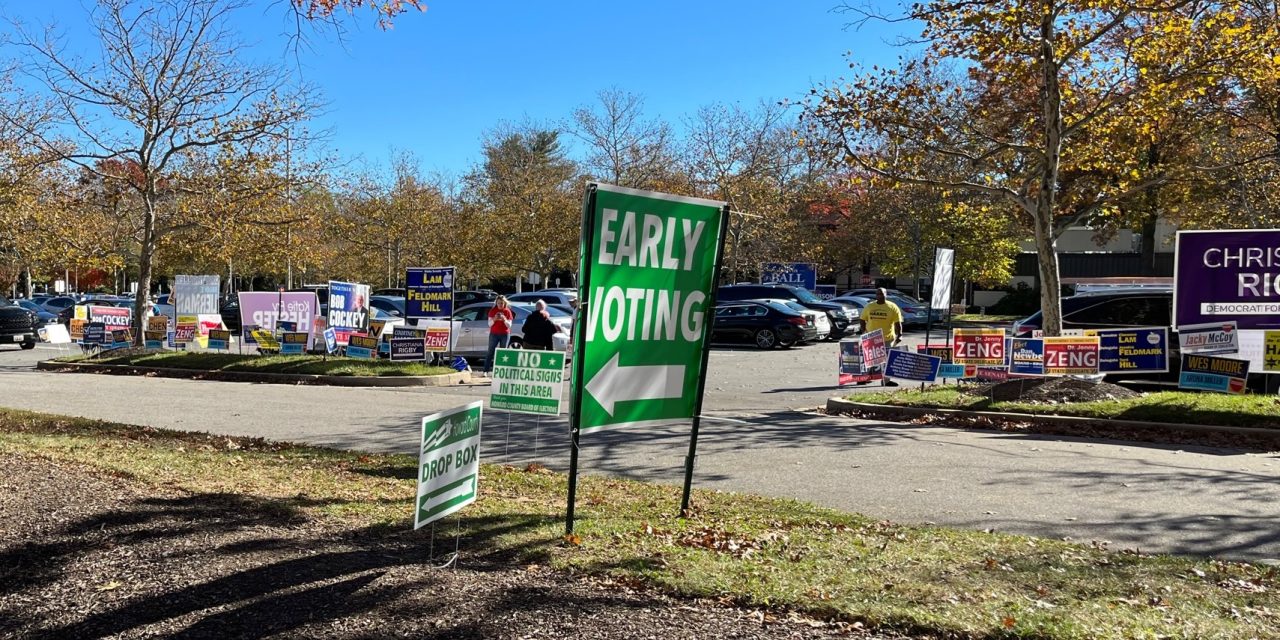 EARLY VOTING BEGINS, MANY REQUEST MAIL IN BALLOTS: A light breeze and a flurry of yellow leaves followed voters as they trickled inside the Silver Spring Civic Building to cast their ballots. It was one of the many election locations Capital News Service visited on the first day of early voting in Maryland. Emmett Gartner, Abby Zimmardi, Timothy Dashiell, Shannon Clark/Capital News Service in MarylandReporter.com

VP TO VISIT MD FOR WES MOORE: Vice President Kamala Harris will be in Baltimore this weekend at a grassroots event for Maryland gubernatorial candidate Democrat Wes Moore. Staff/WJZ

COMMENTARY: LIKE IT OR NOT, WE NEED TO ACCEPT ELECTION RESULTS: When the results from this gubernatorial election are counted, we must respect them and move forward together as one state, recognizing that there is more that unites us as Marylanders than divides us. Gov. Larry Hogan/Washington Post

THIRD OF MD VOTERS IN POLL SAY BIDEN SHOULD NOT RUN AGAIN: While Maryland Democrats appear poised to vote Democratic in the midterm elections, the news from the Baltimore Sun Media and University of Baltimore poll still isn’t all rosy for the president. Their new poll found nearly a third of the state’s likely Democratic voters say President Joe Biden should not run for president again. Sam Janesch/Baltimore Sun

NEW MONT. CO. PLANNING BOARD: The Montgomery County Council appointed five temporary Planning Board members Thursday afternoon, in hopes it will provide stability before permanent members are appointed by the incoming council. Earlier this month, the council accepted the resignations of all of its planning board members. Ginny Bixby and Apps Bichu/Bethesda Beat

COMMENTARY: OUTLAWING PUBLIC EMPLOYEE COLLECTIVE BARGAINING IS BAD IDEA: In Frederick County, a ballot issue committee supported by county government leaders is pushing a roll back of collective bargaining rights for public employees. Ballot issue committees such as this can accept unlimited campaign funds. We would hope this is something legislators in the Maryland General Assembly consider fixing — the door is wide open for corruption and this is a sleazy loophole no government should consider. Jeffrey Buddle, president Professional Fire Fighters of Maryland/Maryland Matters

HINDU NATIONALIST MONEY IN THE GOVERNOR’S RACE: Democratic candidate Wes Moore appears to have tapped into fundraising from those embracing Hindutva, or a Hindu nationalist political ideology. Last month, Moore, a political newcomer, and his running mate, former state Del. Aruna Miller, held a high-dollar fundraiser at the home of Jasdip “Jesse” Singh, the founder of Sikhs for Trump. Rashmee Kumar and Akela Lacy/The Intercept

ANALYSIS: COX THROWS OUT THE PLAYBOOK: Del. Dan Cox (R-Frederick), who is running for governor this year against Wes Moore (D) and three others, appears to have flung the winning GOP playbook of running as a moderate in the middle, out the window, according to a broad spectrum of observers. Bruce DePuyt/Maryland Matters

SCHOOL RESOURCE OFFICERS WIDESPREAD, BUT DO THEY MAKE SCHOOLS SAFER? Amid nationwide concern about school shootings and other violent incidents, all 24 Maryland school districts have employed school resource officers at some time since the 2016-2017 school year, and all but one retain them still. But now, at least five years on, the state says it has no proof that resource officers make schools safer. Emily Condon and Colin McNamara/Capital News Service in MarylandReporter.com

RE-DECKING THE BAY BRIDGE APPROVED: The Maryland Transportation Authority Board Thursday approved a $140 million construction services contract for the Eastbound Bay Bridge Deck Replacement project, which is expected to begin major construction in fall 2023 with anticipated completion in winter 2025/2026. The MDTA has designed the project, often referred to as a re-decking, to ensure minimal traffic impacts for residents and motorists. Angela Price/Easton Star-Democrat