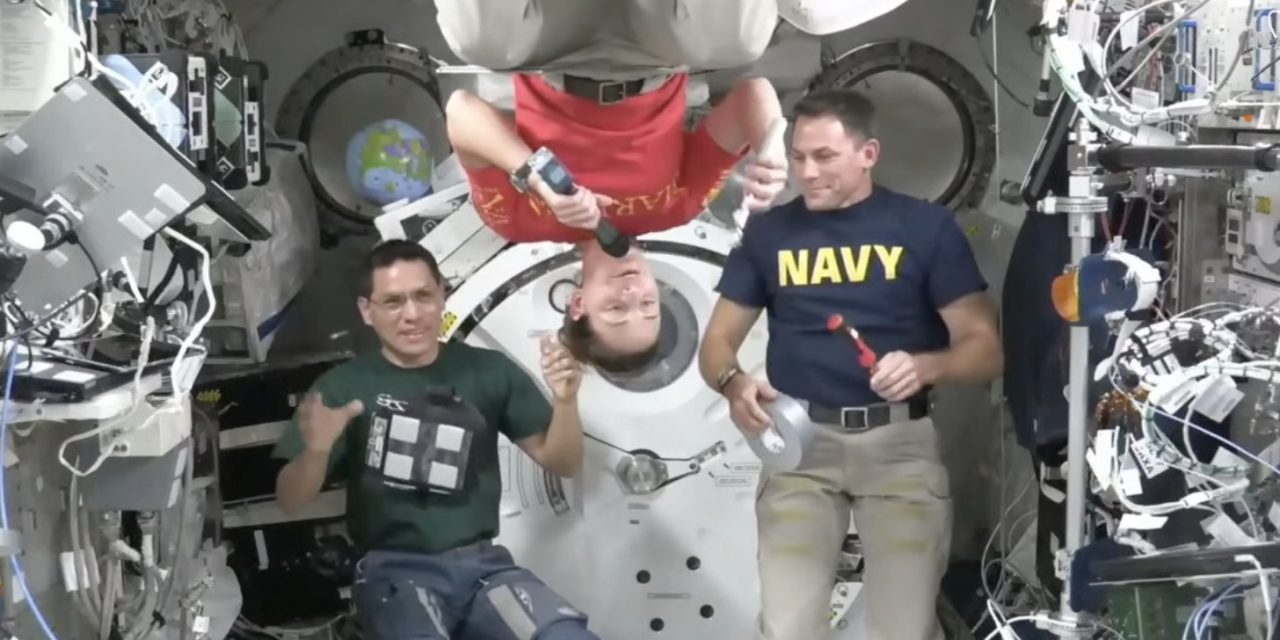 Astronauts (from left to right) Frank Rubio, Nicole A. Mann and Josh Cassada demonstrate the importance of Velcro aboard the International Space Station as they answer questions from Maryland students and students at the U.S. Naval Test Pilot School. (Screenshot from NASA Television by Destiny Herbers/Capital News Service)

Listen to this article
By DESTINY HERBERS
WASHINGTON – The U.S. Naval Test Pilot School partnered Thursday with K-12 schools across southern Maryland to host a question and answer session with astronauts aboard the International Space Station.

Test pilots under instruction and students from seven Maryland schools pre-recorded videos at the Naval Air Station Patuxent River, asking a variety of questions of the astronauts.

Lt. Erin Loft, a test pilot student, asked about the hardest part of adapting to microgravity conditions aboard the ISS, and Mann, the first Native American woman in space, showed off the strips of velcro sewn onto the astronaut’s pants.

“You can imagine, you’re such a mess when you’re trying to get something done,” Mann said, because the air flow and microgravity inside the station makes tools float away.

The astronauts gave Mann’s niece, Brooklyn, a glimpse of daily life on the ISS, where Mann said the day starts with breakfast at 6 a.m. before an “incredibly packed, but very rewarding” 12 hours of work, including maintenance of the station and the science experiments aboard.

Crew members monitor space station research experiments from a wide range of disciplines. A third grade student at Leonardtown Elementary School asked what experiments the astronauts are most excited to work on in space.

On Expedition 68, Rubio said, there are efforts underway to develop organs in space, and to grow tomato plants.

Rubio, who launched on the Russian Soyuz MS-22 last month, said he recently harvested the first tomato grown in space. Lt. Jordan Hernandez asked how involved the astronauts are in decision making with the experiments.

“Up here, we kind of find ourselves in the role of a grad student,” Cassada said. Crew members follow guidance from scientists on the ground to further the experiments, but also lend their own insights from space.

The skills that Mann learned at test pilot school are “100% applicable everyday,” she told student Connor, because the astronauts have to be adaptable and learn quickly to execute their tasks and communicate results.

Cmdr. Jeremy DeBons, commanding officer of the U.S. Naval Test Pilot School, said that nearly 100 graduates of the school have gone on to become NASA astronauts.

Both Mann and Cassada are graduates of the school, and served as test pilots in the U.S. Marine Corps and the U.S. Navy before joining the expedition.

In their limited free time, Cassada said the crew enjoys playing with their meals in microgravity, making calls back to Earth to keep up with their families, and sneaking peeks out of the station windows.

“Looking out that window, at Earth and looking at that atmosphere, you realize how lucky we are to live on planet Earth. It is quite a place and we need to protect it,” Cassada said.