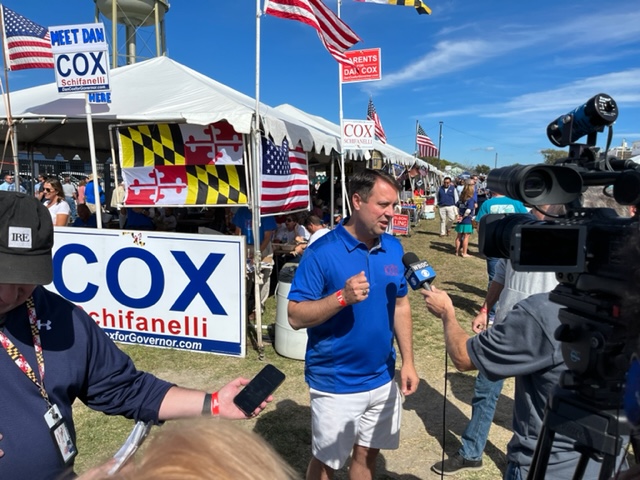 Dan Cox, the Republican nominee for governor, talks to reporters outside his tent at the Tawes Crab & Clam Bake in Crisfield Wednesday. MarylandReporter.com photo by Len Lazarick

COX FACES TOUGH QUESTIONS AT MORGAN FORUM: GOP gubernatorial candidate Dan Cox, attended his solo appearance before a small audience at Morgan State University on Tuesday, was asked about a dozen questions on abortion access, election integrity, critical race theory and gender identity, the attack on the U.S. Capitol on Jan. 6, 2021, and on funding for HBCUs. Cox, who has described the 2020 presidential election as “stolen,” would not commit to accepting the results of his own contest in November. Ovetta Wiggins/The Washington Post.

DEM LAWMAKERS TO SEEK TO PROTECT ABORTION PROVIDERS: Maryland Democratic lawmakers say they are planning on taking up shield laws in the next legislative session to protect abortion providers as more people come from out of state to get reproductive care. Scott Maucione/WYPR-FM.

PROSECUTORS IN McGRATH CASE HOPE TO DODGE SPOUSAL PRIVILEGE: Prosecutors are seeking to introduce potentially damaging text messages into evidence ahead of the trial for Roy McGrath, a former top aide to Gov. Larry Hogan who is facing federal wire fraud and theft charges. The text messages are particularly important because McGrath has married the woman who sent them since being indicted, opening up the possibility that she will claim spousal privilege to avoid testifying against her now-husband. Madeleine O’Neill/The Daily Record.

FIVE TAPPED FOR CARROLL POLICE ACCOUNTABILITY BOARD: The Carroll Board of County Commissioners on Tuesday announced the five members of the county’s first police accountability board created, following a mandate from the state, to receive complaints of police misconduct, review police disciplinary trends and work with local law enforcement to improve policing. Sherry Greenfield/The Carroll County Times.

ANGELOS LAW FIRM ACCOUNTS COULD BE FROZEN: Bankers are considering freezing the accounts of the law firm of Peter Angelos, which would jeopardize the famous Baltimore firm’s ability to pay settlements, its employees, and even carry on with business, attorneys told a Baltimore County judge Wednesday. Tim Prudente/The Baltimore Banner.