STAFF VACANCIES WORSEN CONDITIONS AT B’MORE JUVIE CENTER: The Baltimore Juvenile Justice Center is experiencing a high number of assaults among its youth inmate population. The Maryland Department of Juvenile Services, which runs the facility, is dealing with “higher than usual vacancies” that have worsened “chaotic” conditions and depleted programming, a report has found. Staffing issues such as low morale, burnout and turnover are “not being acknowledged or adequately addressed by DJS leadership,” according to the report. Ben Conarck/The Baltimore Banner.

McGRATH SEEKS TO HAVE STATE CHARGES KEPT FROM FEDERAL TRIAL: An attorney for Roy McGrath is asking a federal judge to preclude introduction of state charges and a related report by the Maryland General Assembly when the former top aide to Gov. Larry Hogan is tried on federal charges of wire fraud and theft. Bryan Sears/The Daily Record. 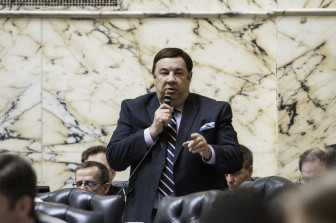 PG COUNCIL TO HEAR FROM POLICE BOARD HOPEFULS: The Prince George’s County Council will hold a virtual listening session Tuesday for candidates willing to serve on the jurisdiction’s new police accountability board. The 11-member body is mandated through legislation state lawmakers approved last year. The council plans to approve five members to the board and County Executive Angela Alsobrooks (D) will name the other five, along with the board chair. William Ford/Maryland Matters.

POLITICAL NOTES: MIZEUR MONEY; CONGRESSIONAL BLACK CONFERENCE IN PERSON: Heather Mizeur is in her old stomping grounds to raise money in her race against U.S. Rep. Andy Harris. The Maryland members of the Congressional Black Conference Foundation will have active roles in this year’s CBC, held in person for the first time in three years and expected to attract 10,000. Wes Moore declined to appear with gubernatorial opponent Del. Dan Cox, the Republican nominee, at a proposed candidate forum tonight at Morgan State University. Instead, Moore said he’ll visit all four of Maryland’s HBCU campuses during the campaign, including Morgan. Josh Kurtz and William Ford/Maryland Matters.

BAINUM ON THE BALTIMORE BANNER: Stewart Bainum Jr., chairman of the board of Rockville-based Choice Hotels International, is looking inward, contemplating a future for his startup Baltimore Banner newspaper, for which there is no blueprint. His energy and intellect have been focused on Baltimore, where he hopes the Banner can become a model for how to revive vanishing local news coverage. Mike Unger/Bethesda Beat.