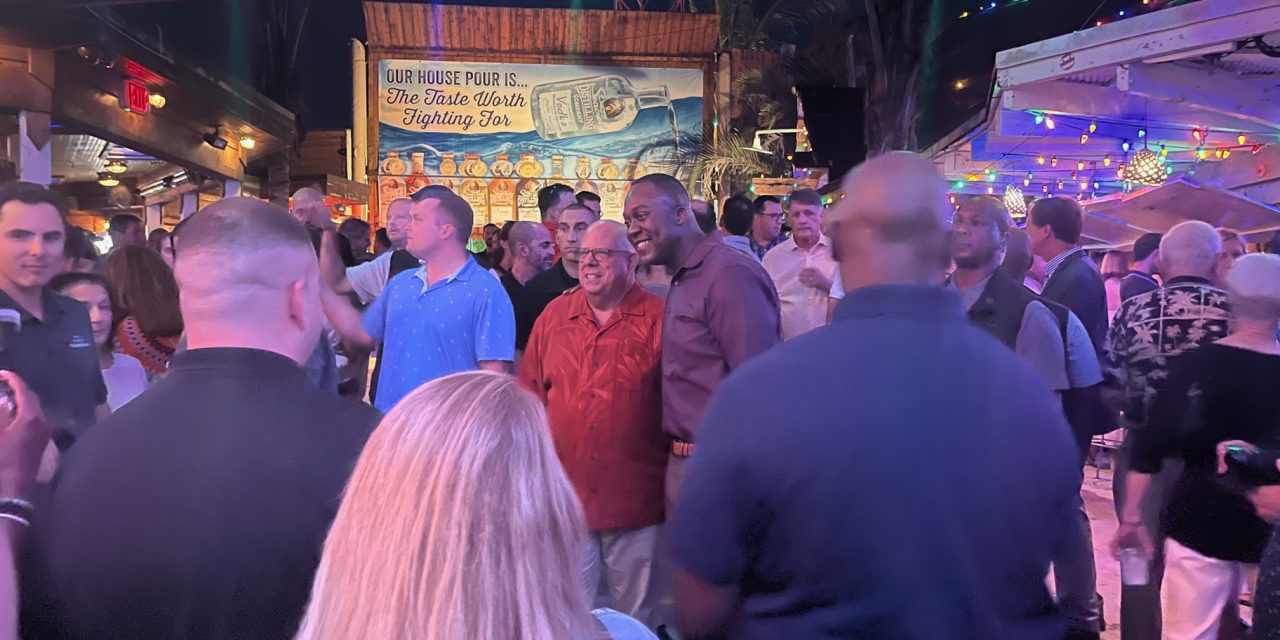 A BIGGER CROWD: Howard County Executive Calvin Ball was one of literally hundreds of guests who posed for a photo with Gov. Larry Hogan at a Thank You Event Wednesday night with attendees of the Maryland Association of Counties Summer Conference at Seacrets night club in Ocean City. Hogan commented to Maryland Reporter that it was a much bigger crowd than the 10 people who attended the first Change Maryland event at his home 10 years ago that helped launch his run for governor. When Len Lazarick responded that he recalled there were a lot more people than that, Hogan 'Maybe 20 people.' MarylandReporter.com photo by Len Lazarick

MOBILE SPORTS BETTING WON’T HIT BY SEPTEMBER: Marylanders will not be able to place mobile bets on sporting events by September as Gov. Larry Hogan hoped. The news comes as the Sports Wagering Application Review Commission Wednesday awarded two new licenses, including the first linked to a professional sports stadium and team in the state. The panel also voted to establish a 45-day window for reviewing applications for mobile sports betting licenses once those applications can be accepted. Bryan Sears/The Daily Record.

MOORE ENDORSED BY FRATERNAL ORDER OF POLICE: Maryland Democratic gubernatorial nominee Wes Moore has picked up a major endorsement from one of the state’s largest unions: the Maryland Fraternal Order of Police. Ovetta Wiggins and Erin Cox/The Washington Post.

FERGUSON PROVES HIS FUND-RAISING METTLE: In his first election as the upper chamber’s leader, Senate President Bill Ferguson (D-Baltimore City), is proving that he’s no slouch on the fundraising front. At this point in the 2018 election cycle, the Senate Democrats under the late Mike Miller had raised $924,000 — at a time when Republicans were aggressively targeting five Democratic Senate seats. The Senate Democratic Caucus Committee under Ferguson has collected $1.26 million so far. Josh Kurtz/Maryland Matters.

HOGAN STOPS AT RISING SUN BREWERY: Gov. Larry Hogan made a stop in Rising Sun on Wednesday to check on one of the many businesses that is benefitting from Project Restore. Steve Applegate and Chris Davis, co-owners of Bog Turtle Brewery, welcomed Hogan and thanked him for the grant funding. “We got grants from the state and Cecil County to get us through the pandemic,” Applegate told the governor, noting the brewery qualified for assistance with rent and operations. Jane Bellmyer/The Cecil Whig.

OPINION: CONVENTIONAL WISDOM FAILS IN TODAY’s POLITICS: A dictionary definition of conventional wisdom is “a generally accepted theory or belief.” This definition needs a disclaimer: Widespread conventional wisdom in politics is challenged regularly by actual election results that are opposite of predicted election results. We live in a world characterized by high levels of Volatility, Uncertainty, Complexity, and Ambiguity. David Reel/MarylandReporter.com.

SCHOOLS START WITH NEW PROTOCOLS: With the start of the new school year approaching on Aug. 29, the Howard County Public School System has issued revised COVID-19 protocols to adapt to the changing realities of an almost 2½-year-old pandemic. Ethan Ehrenhaft/The Baltimore Sun Media.

OPINION: CHOURDHURY GETS IT: The new school year brings energy, hope, and fingers crossed. Some educators even foresee turning the COVID adversity to advantage because of lessons learned, like those on tutoring and online instruction. On the other hand, learning loss is much deeper than realized. Student behavior and emotional problems are worse than ever. Teacher vacancies are extraordinarily high. An unprecedented one-third of all Maryland’s local school districts will have new permanent superintendents this year. However, I am upbeat because of the unique combination of the Blueprint for Maryland’s Future and, arguably even more important, the leadership of state superintendent Mohammed Choudhury. Kalman Hettleman/Maryland Matters.