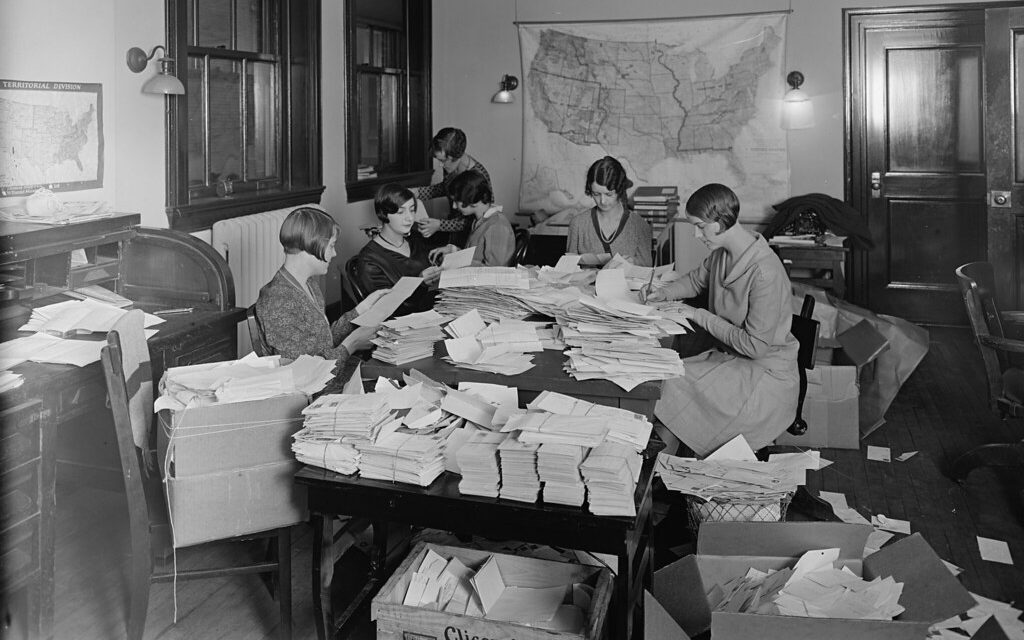 Despite early counting of mail-in ballots, results of tight races may be delayed. State Department photo circa 1918.

AS COUNTS CONTINUE, WHERE DO RACES STAND? Though most of the major races are settled, the vote tallying in Maryland’s primary is still underway as mail-in ballots continue to trickle into local elections offices and some aren’t scheduled to be opened and counted until Wednesday or later. Sam Janesch/The Baltimore Sun.

OPINION: DAN COX WILL WIN: What the elites on the Left and the Right forget is that there is a real undercurrent of change in the American electorate.  Last year, suburban women who were turned off by Donald Trump’s brusque rhetoric took a serious liking to Virginia Republican Glenn Youngkin’s concern of critical race theory.  Asian and Latino Democrats who may have tuned out Trump because of his tone on illegal immigration are now seeing that their pocketbooks and their public safety are better protected by Republicans. Chris Anderson/MarylandReporter.com.

NOT JUST COX VS. MOORE:  David Lashar, the Libertarian nominee for governor, decided to remind the press corps that it won’t just be Republican Dan Cox and Democrat Wes Moore on the November ballot for governor. But it includes him, nominated by the party months ago, along with the candidates for the Green Party and the Working Class party. There may be independents as well if they can collect 10,000 signatures to get on the ballot by Aug. 1. MarylandReporter.com

OPINION: HOGAN PLAYS INTO CONSPIRACY THEORISTS: Maryland voters cast their primary ballots on July 19 or, in the case of those who voted early in person or by mail, before then. Now, almost a week later, the victors in many close local races remain undetermined — both because of the exceptionally large number of mail-in ballots and because Gov. Larry Hogan (R) vetoed legislation that would have accelerated their processing. Mr. Hogan’s veto was a gratuitous gesture that was little more than a sop to Republican voting fraud conspiracy theorists. Editorial Board/The Washington Post.

STAFF SHORTAGE AT POLLING SITE: A Baltimore election judge who worked Tuesday’s primary said a severe staff shortage at his polling site nearly crippled the operation and could have even more dire consequences in November should in-person turnout increase. Hallie Miller/The Baltimore Banner.

SEN. ECKARDT TO RUN FOR CAMBRIDGE MAYOR: Fresh off a tough defeat in the Republican primary last week, state Sen. Adelaide Eckardt (R-Middle Shore) filed papers on Monday to run in the upcoming special election for mayor in Cambridge, her hometown. Eckardt, a 28-year veteran of the General Assembly who has spent the past eight years in the state Senate, was defeated in the Republican primary by state Del. Johnny Mautz. Josh Kurtz/Maryland Matters.

OPINION: POLITICAL WINNERS & LOSERS:While the counts go on, there still is enough evidence of how things are going to opine on who some of the winners and losers from the primaries were. So here is the exhaustive list. Josh Kurtz/Maryland Matters.

BATES: POLICE, CITY HALL MUST HELP TO REDUCE VIOLENT CRIME: Ivan Bates, the Democratic nominee for Baltimore state’s attorney, said all of Baltimore can agree on one thing: “Everyone wants a safer city.” Speaking Monday at his first news conference since becoming the nominee, Bates promised to reduce the violent crime plaguing Baltimore neighborhoods, but said in doing so he will need help from law enforcement and City Hall. Lee O. Sanderlin/The Baltimore Sun.

MO CO SCHOOLS, POLICE JOIN TO ADDRESS SCHOOL CRIME, INFRACTIONS: Ahead of the new school year, dozens of Montgomery County police officers and teachers sat Monday in an auditorium for training on how to respond to crimes and infractions at school. Montgomery County Police Chief Marcus Jones said the training at Walter Johnson High School in Bethesda was one of the first times that educators and law enforcement have trained together, and it comes as police are returning to county schools this year on a limited basis. Nicole Asbury/The Washington Post.

FROSH SAYS ANNOUNCEMENT SOON ON CLERGY ABUSE PROBE: It’s been five decades since a group of Maryland women say they were sexually abused by a Catholic priest and other men at their Baltimore-area high school. A spokesperson for Maryland Attorney General Brian Frosh said an announcement on the ongoing state investigation of clergy abuse across three Catholic dioceses in Maryland is coming. Glynis Kazanjian/WJLA-7 News.