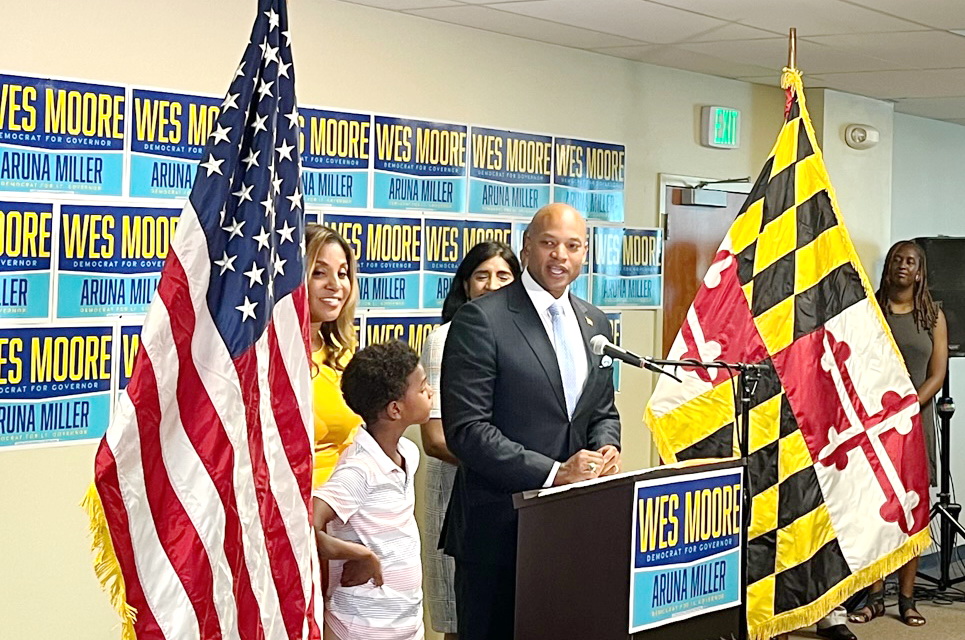 Wes Moore spoke on Saturday, July 23, after his main opponents conceded that he won the Democratic nomination for governor. With him on the left is wife Dawn Moore and son James. Behind him is the Democratic nominee for lieutenant governor, Aruna Miller. MarylandReporter.com photo by Len Lazarick

COX V. MOORE: A STUDY IN CONTRASTS: The race between Del. Dan Cox and Wes Moore to become Maryland’s next governor will be a showcase of contrasts, a chance for Democrats to flex the muscle of their dominant registration advantage as Republicans attempt to hold onto outgoing Republican Gov. Larry Hogan’s gains and not retreat in Annapolis. Ovetta Wiggins and Erin Cox/The Baltimore Sun.

FRANCHOT CONCEDES: Peter Franchot, who deferred seeking a fifth four-year term as state comptroller to run for governor this year, conceded in the Democratic primary on Friday as results showed he had little chance of catching Wes Moore and Tom Perez in the ongoing vote count. Sam Janesch/The Baltimore Sun.

HOGAN’s NEXT ACT IN QUESTION: Asked Sunday about his presidential ambitions after Maryland voters elevated a Trump-aligned candidate to succeed him, Gov. Larry Hogan said he planned to “double down” on his long-term fight to pull the Republican Party in a different direction. “I can tell you I’m not giving up,” Hogan told Jake Tapper on CNN. Erin Cox/The Washington Post.

MODERATE REPUBLICAN GLASSMAN FACES TOUGH ROAD: Republican Barry Glassman may find himself out on a bit of an island in his race for comptroller. For weeks, Republicans across Maryland fretted over what became a reality Tuesday, a Dan Cox victory in their party’s gubernatorial primary. On top of that, Republicans nominated Michael Peroutka, a one-term Anne Arundel County councilman with past ties to a group that advocates for southern states secession as their nominee for state attorney general. Bryan Sears/The Daily Record.

MOSBY A POLARIZING FIGURE: In 2014, Baltimoreans, frustrated with violent crime, elected a 34-year-old insurance attorney who had never tried a homicide or rape case to be the city’s top prosecutor. Eight years and more than 2,500 homicides later, the city’s Democratic voters ousted Marilyn Mosby as Baltimore state’s attorney, choosing defense attorney Ivan Bates in Tuesday’s primary. Her time in office was polarizing, and will be remembered for her progressive prosecution policies and prosecution of police officers as much as for the investigations into her conduct. Lee O. Sanderin/The Baltimore Sun.

OPINION: MOSBY’s DERELICTION OF DUTY: Baltimore’s murders are typically committed by criminals with lengthy rap sheets, who often serve minimal time or are released early. These repeat offenders should be locked up but aren’t, thanks to the dereliction of progressive prosecutors like Marilyn Mosby. Sean Kennedy/The Wall Street Journal.

SHELLENBERGER CONTINUES TO LEAD RIVAL: Incumbent Baltimore County State’s Attorney Scott Shellenberger remained ahead in the Democratic primary for his office after mail-in votes were added Saturday, extending his lead over progressive challenger Robbie Leonard to just under 1,800 votes in the latest accounting of mail-in ballots. Taylor DeVille and Hallie Miller/The Baltimore Banner.

LEONARD SKOLNICK, POLITICAL KINGMAKER, DIES AT 85: Leonard R. Skolnik, former chairman of the city Board of Liquor License Commissioners who was active in Democratic politics and had been a developer and apartment manager, died from heart failure July 12 at Sinai Hospital. The longtime Mount Washington resident was 85. Fred Rasmussen/The Baltimore Sun. 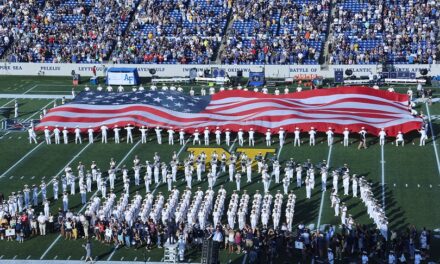