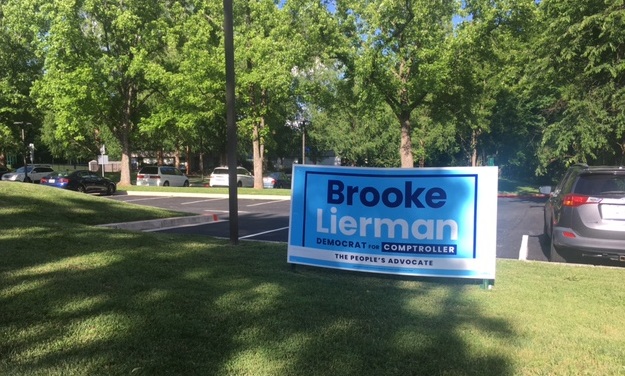 CORRECTION: Contrary to a caption of this photo posted earlier, this sign for Democratic comptroller candidate Brooke Lierman is not on property owned by the Columbia Association, but a parcel owned by the Howard Hughes Corp., the successor developer of Columbia, according to Dannika Rynes, senior manager of media relations & communications for the Columbia Association. MarylandReporter.com photo by Len Lazarick

HOGAN CALLS FOR CRIMINAL INVESTIGATION INTO GRADE FIXING: Gov. Larry Hogan asked the Maryland State Prosecutor to investigate any alleged criminal conduct that is involved in a grade fixing scandal in Baltimore City, where an investigative report had revealed 12,552 grades were changed from failing to passing and potentially hiked the system’s graduation rate. Hogan specifically mentioned fraud as something to investigate, since the system receives federal money. Ryan Dickstein/WMAR

POSITIONS ON EDUCATION FROM GUBERNATORIAL CANDIDATES SCRUTINIZED: In coverage of the June 6 debate hosted by MPT earlier this week, AFRO News writes that the third question of the debate, asked by AFRO News Editor Alexis Taylor, was shied away from by most of the men looking to be the next governor of Maryland. “How will you navigate our schools through the pandemic as it continues and the numbers rise?” Taylor said. Tinashe Chingarande/the AFRO

POLL FINDS TRUMP GETS MORE SUPPORT THAN HOGAN AMONG MD GOP VOTERS: In a potential primary matchup between President Donald Trump, Md. Gov. Larry Hogan and four other possible candidates, Trump has twice the support of Hogan among likely Republican voters in Maryland, according to the poll from Baltimore Sun Media and the University of Baltimore. Sam Janesch/Baltimore Sun

JAN. 6 COMMITTEE BEGINS MAKING CASE TRUMP IS TO BLAME IN U.S. CAPITOL ASSAULT: The House committee that has spent a year investigating the Jan. 6, 2021, attack on the U.S. Capitol aired video clips of former president Donald Trump’s daughter, son-in-law and closest aides Thursday night as it began making its case that the assault was the violent culmination of an attempted coup. Rosalind Helderman and Jacqueline Alemany/Washington Post 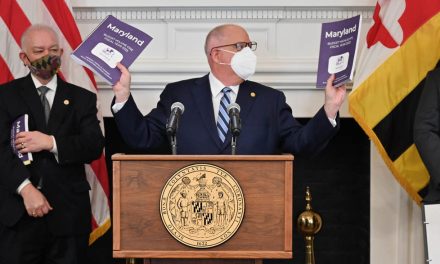