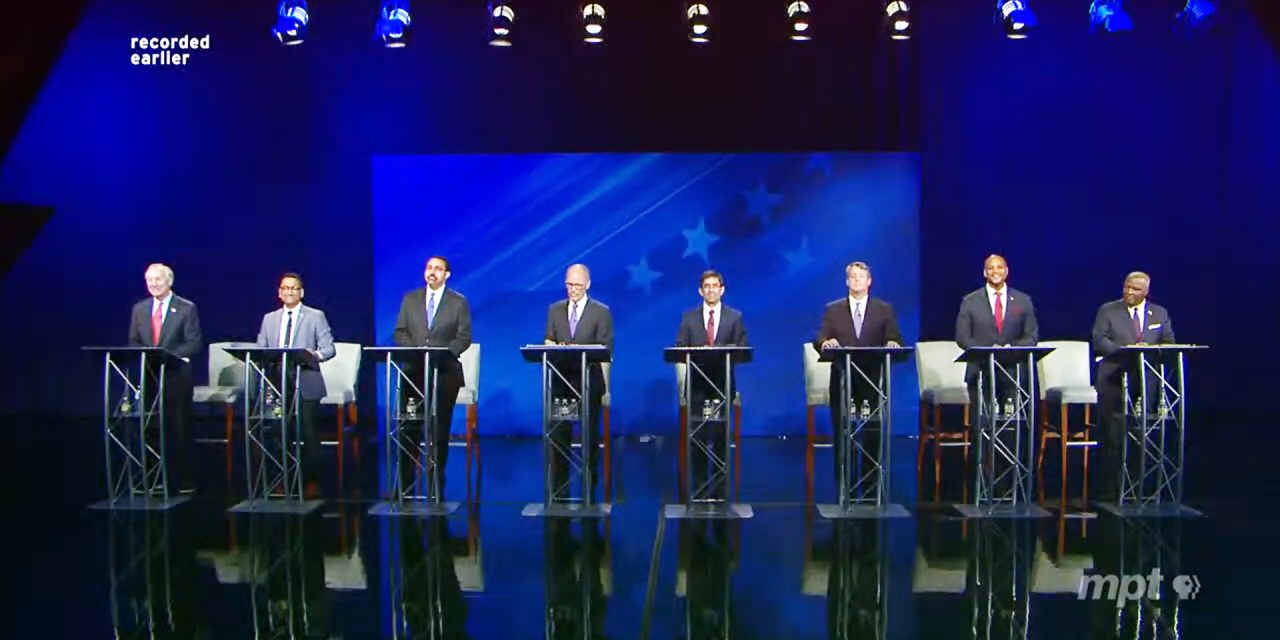 SPARKS FLY IN GOVERNOR’s RACE DEBATE: In the first major televised debate of the governor’s race, Comptroller Peter Franchot, former nonprofit leader Wes Moore and former U.S. Labor Secretary Tom Perez took aim at each others’ integrity, public service and private work experience on the heels of a new poll from Baltimore Sun Media and the University of Baltimore that found them to be top contenders for the July 19 primary. Sam Janesch and Hannah Gaskill/The Baltimore Sun.

MOSBY DEFLECTS RESPONSIBILITY FOR PROSECUTOR SHORTAGE: Baltimore State’s Attorney Marilyn Mosby deflected responsibility for a lack of prosecutors in her office while lashing out at media reports about the staffing shortages during a Baltimore City Council hearing Monday night about her agency’s budget. Mosby, a Democrat who this year is seeking her third term as the city’s elected prosecutor, is asking the City Council for $39.6 million for the fiscal year starting July 1, a modest increase over this year. Alex Mann and Lee Sanderlin/The Baltimore Sun.

SUN/UB POLL FINDS BROWN WITH GOOD LEAD OVER O’MALLEY: Anthony Brown is a clear front-runner over Katie Curran O’Malley in the Democratic primary for Maryland attorney general, 42% to 29% among likely Democratic voters, a new poll for Baltimore Sun Media and the University of Baltimore shows. Twenty-seven percent of respondents were undecided. On the Republican ticket, Michael Peroutka, a former Anne Arundel County councilman and attorney, and Jim Shalleck, a private attorney and former federal prosecutor, are essentially tied Lee Sanderlin/The Baltimore Sun.

PRINCE GEORGE’S CONTINUES TO DEBATE POLICE ACCOUNTABILITY BOARD: With less than a month to adhere to a state-imposed July 1 deadline to establish a police accountability board and other police-related measures, Prince George’s County Council and residents continue to debate on how to strengthen those efforts. Several amendments reviewed Monday include funding the board and an administrative charging committee with at least a half percent of the police department’s general fund budget. William Ford/The Washington Informer.

CLIMATE CHANGE’s HARSH IMPACT ON MONTGOMERY: Montgomery County is largely protected from rising sea levels. Yet forecasts indicate that the impacts of climate change, particularly on temperature and precipitation, will be seen in multiple ways across the county, now and in coming years. Louis Peck/Bethesda Magazine.

POLITICAL NOTES: Businessman David Blair — who began buying ads on county cable systems in mid-May — has expanded his televised appeals to more expensive broadcast channels in the Washington, D.C., market, as he seeks to capture the Democratic nomination for county executive. Pro-Choice Maryland endorsed County Executive Marc Elrich — seeking the Democratic nomination for a second term against three opponents. Elrich was not reticent when Nancy Navarro’s endorsement of Blair was raised during an appearance last Friday on WAMU. Louis Peck and Steve Bohnel/Bethesda Beat.

COMMISSIONER HOPEFUL FILES ETHICS COMPLAINT AGAINST INCUMBENT: A Republican candidate for Washington County commissioner said last week that the incumbent president of the board of commissioners used his position for private gain after the transfer of lakefront property at Fort Ritchie. Michael Garcia/The Hagerstown Herald Mail.